On Thursday 26th January, seven defendants were acquitted on charges of aggravated tresspass and failing to leave land when requested to do so by a police officer. The charges resulted from a blockade of the Agrexco premises in Hayes Middlesex on November 11th, 2004. Agrexco is the Israeli National exporter of fresh produce and flowers from Israel and the occupied Palestinian Territories. The acquittal after submissions at the end of the prosecution case, meant that the defendants were unable to present their defence that trade with Israeli Settlements is not lawful activity. 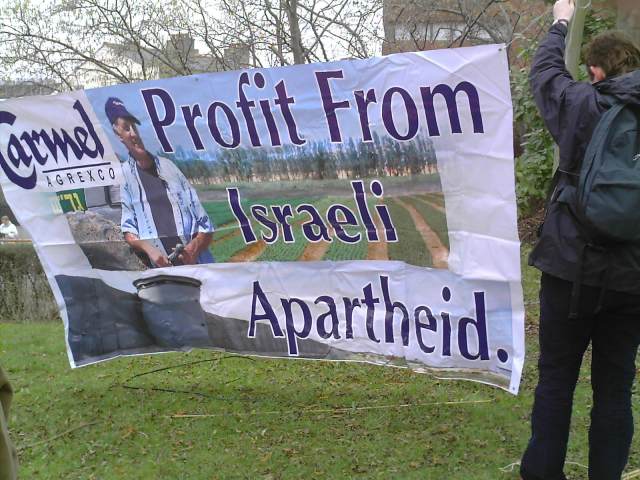 A group of activists, many of whom had previously spent time in Palestine, arrived at the Agrexco UK Headquarters shortly after 4am on Thursday, 11th November 2004. Using temporary fencing and D-locks which they had brought with them, the activists erected a cage across one of the driveways. The cage was constructed in a diamond shape and there was someone D-locked to each inside corner. At the other driveway, temporary fencing was erected across the driveway and activists attached themselves to the fencing.

The blockade lasted until after 2pm, and the company estimated that they had suffered a financial loss of between £40 000 and £200 000. All those who locked on were arrested and three were denied bail and held overnight

Original report of the action

At the hearing on 12th November 2004, the defendants were bailed. All seven were bailed not to go near the estate where Agrexco is sited, and the three that were held overnight were bailed on the further condition that they did not enter private land for the purposes of protest without the express permission of the landowner. What is most worrying about the bail conditions is that they were proposed by a barrister appearing on behalf of the defendants. The bail conditions were in place until the acquittal last week.

Due to a succession of problems, including disclosure of relevant materials, the trial finally took place 15 months after the action. On the first day, the Warehouse Manager and General Manager of Agrexco, Amos Orr appeared as witnesses for the prosecution

Over the course of questionning of the first two witnesses, it became evident that the land of which the protestors had erected their structures, did not belong to Agrexco. Agrexco had a right of way over the land but did not own it. It also came to light that there did not appear to be a current license for the goods in the warehouse at the time of the action.

A group of people enjoyed a lunch against trade with Israel outside the court during the day.

Report of first day of trial

The second day of the trial saw a number of police witnesses and a screening of the video evidence shot by the police aduring the action. A number of the subsequent witnesses managed to contradict Chief Inspector Cumber, the operational 'silver' who was in charge of the 'critical incident'. By the end of day 2 it seemed apparent that the warnings issued by Chief Inspector Cumber were open to interpretation and had sown confusion.

Wednesday saw the close of the prosecution case, and a number of submissions by the defence team. Court was adjourned overnight at 3 pm and on the Thursday, the District Judge gave her ruling that the prosecution had failed to prove that tresspass took place, and that therefore she was acquiting all seven defendants. Whilst the acquittal is to be enjoyed, the down side was that no ruling was made on the legality of settlement products. During the trial, a meeting was held at ULU with Uri Davis, author of Israel: The Apartheid State, Sue Backwell - supporter of academic boycott, and Palestinian writer Ghada Kharmi in support of an economic boycott of Israeli goods. Uri davis gave a thought provoking presentation on Israel as an Apartheid State, and the need for a boycott to effect change in the region.


In a remarkable judgement yesterday, Thursday 26th Jan 2006, after a
half time application by the defence team in the Uxbridge 7 trial, a
District Judge ruled that seven anti-apartheid protesters who had blockaded the Israeli agricultural export company, Agrexco UK, had no case to answer and the case was dismissed.

The charges of Aggravated Trespass and Failure to Leave Land were
dismissed after District Judge Barnes sitting in Uxbridge Magistrates
Court, found that the evidence against the defendants was ‘too tenuous’ to justify continuing with a trial.

The trial had been listed for seven days but ended on the morning of
the fourth day with the dramatic acquittals.

On November 11th 2004 the seven protesters succeeded in shutting down
the UK distribution centre of Israel’s biggest state owned agricultural export company for over eight hours, blocking both the entrance and exit to the Agrexco UK distribution centre, near Swallowfield Way, Hayes, Middlesex, and reportedly losing the company over £100,000 in profit, which would have been channeled back into the Israeli economy. Amos Orr, General Manager of Agrexco UK, said in court that Agrexco exports from Israel, and the occupied territories amount to some $700 million a year out of a total of $880 million which is the annual total of all Israeli agricultural exports. He admitted Agrexco imports between 60-70% of all produce that is grown on illegal settlements in the occupied territories.

The protest was carried out to draw attention to the complicity of
Agrexco, in the system of Apartheid that is enshrined in Israeli law.
The defendants acted in support of the growing campaign for an
international economic boycott of Israeli goods.

At a packed public meeting at the University of London Union, Malet
Street, London, on Wednesday evening, British/Israeli academic Dr Uri
Davis spoke in support of the blockade action and a boycott of Israeli
goods. He described Israel as the only apartheid state in the United
Nations.

The November 11th protest focused on the ruling of the International
Court of Justice (ICJ) at the Hague, earlier in 2004, which ruled that the apartheid wall was being built on Palestinian land in contravention of international law and should be taken down immediately, and also that illegal settlements should be dismantled.

Supporters of the defendants had collected documentary evidence of
Agrexco’s business operations in the Jordon Valley that would have been put forward to show their complicity in the ‘ Crime of Apartheid’ which is a crime under UK domestic law under the International Criminal Court Act 2001.

As it turned out, this defence did not need to be argued, because
reference to UK Land Registry documents showed that Agrexco UK had
built both their entrance and exit gates on other peoples land and had no legal right to ask the protesters to leave.

It also became clear that Agrexco could not prove they were trading
lawfully, being unable to show UK import licences for the stocks of
strawberries that were ready to deliver on the day of the protest
action.

Chief Inspector Cumber of Hayes Police who acted as police commander at the scene of the blockade invoked powers to arrest protesters who
refused to leave land, but had only taken the word of Mr Orr when investigating who owned the land on which the protesters had set up the blockade.

The defence argued that even if it was reasonable for the commander to
believe Agrexco UK’s General Manager when he had claimed the company
owned the exit and entrance to their property, and then arrest the protestersunder this belief, as this belief was wrong it could no longer be grounds for convictions for aggravated trespass.

In addition to this top Chief Inspector Cumber’s testimony was
undermined, by his claim in court that he had given the protesters a direction to leave the property by 10:45am. Two other police officers on the scene were convinced-as were the defendants-that the protesters were granted till at least 11am to observe the two minutes silence of armistice day 2004, the day of the blockade. A police ‘decision log’ which would have documented the agreement had mysteriously vanished from police files he claimed.


The campaign to Boycott Agrexco continues. A website that will gather
information disclosed through Uxbridge case will be launched soon.