rumours are spreading that David Jones, Managing Director of the embattled arms manufacturer EDO MBM of Brighton, has quit
see

http://www.smashedo.org.uk/news.htm for details of the rumour 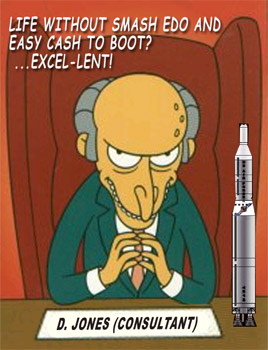 As if Kodfish's resignation wasn't enough, Anti-arms trade activists received a surprise Christmas present when news that David Jones - EDO MBM's Mr Burns-a-like managing director – had resigned spread up and down the picket line on January 18th's Drums not Bombs demo. Bomb-builder Davey Jones – who handed his notice in on December 31st ( ..and a Happy New Year!) - has been coy about his reasons for going and EDO have made no public statement. So why now, just when EDO 's biggest customers are gearing up for another war in the Middle East and there's a killing to be made? Jonesy was part of the original management team who bought out the company and then two years later flogged it for vast profit to US arms giant EDO Corp. Has he just developed a conscience and decided to spend more time with his garden or could it be that D.J.'s resignation was of the more forced variety.

As the managing director, Jones was responsible for the disastrous strategy of taking out an injunction against protesters – and in fact the injunction was taken out in his name not the company's! But not only has the injunction totally failed to prevent protests outside the factory but it's swelled numbers and brought the campaign a lot of national and untold local press coverage. The letters page of The Argus is rarely without its EDO Corner these days, and EDO 's experience in court has been humiliating with its directors forced to confront the bloodshed caused with the equipment they manufacture in Moulescoombe. Not only that, but if they lose the High Court battle they could end up with a legal bill of £2 million. Not the merest dent in EDOs corporate billions we're sure - but not exactly good management either. Step up Paul Hills EDO 's new MD - How long are you gonna last?

So with Kodfish off to the great glass bowl in the sky and Davy Jones safe in the locker…. Rough Music warns all enemies of the people..your day will come.