SOAS defends academic freedom - but only for approved viewpoints 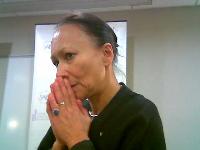 The reputation of the School of Oriental and African Studies (SOAS) has taken another knock after one of its lecturers was accused of being the "Western cheerleader" for the Uzbek brutal dictator Islam Karimov.


Craig Murray, former British Ambassador to Uzbekistan also accused SOAS director of "arrogance". The charge was leveled at SOAS director MR Colin Bundy by Mr Murray in a dispute over one of the school’s lecturers accused of producing a "propagandist" report on the Massacre of Andijan.


The person in question, Shirin Akiner, (pictured) was accused by Mr Murray as well as human rights and liberty campaigners, of producing a report which is neither independent nor academically sound. The findings of the report, written by the SOAS lecturer in Central Asian Studies, seem to completely indorse the Uzbek government line, putting the blame squarely on whom she calls "Islamist insurgents".


Ms Akiner recently went on a US tour promoting the report as a counter to what is known to have taken place on that fateful day in May. She accuses the Western governments and, in particular, the media of false reporting and says the Uzbek government is right not to allow an independent international investigation into the events.


She has come under fierce attack from NGOs who questioned how she was allowed, by the Uzbek government, to conduct her own investigation at a time when no journalists or NGOs where given access. Ms Akiner refuted accusations that she was invited in by the Uzbek government to give support to their version of events.


The SOAS lecturer said she went to Uzbekistan to deal with the aftermath of the cancellation, due to the Andijan violence, of a NATO conference on religious extremism that she had organized. Once in Tashkent, Akiner said, "I squeezed out time for myself to go to Andijan."


In his email to the SOAS director, Craig Murray stated that his qualm is not with Ms Akiner’s political views, but rather that an institute such as SOAS can have a lecturer in the affairs of such a volatile region, who admits to having ties to the Uzbek regime and actively acts as its "apologist".


Mr Murray questioned the lecturer’s objectivity and called on the school’s ethics committee to investigate this case. "The idea that in a totalitarian state evidence of an alleged government atrocity can be gained by allowing the government to produce the witnesses, and interviewing them in the presence of government officials, is ludicrous, as any decent academic would recognise." wrote Mr Murray.


In a responding email, Mr Bundy appeared to dismissed points raised by the ex-diplomat as "unsubstantiated" and ignored his calls for further investigate by the School. That prompted an angry response from Mr Murray who accused the director of being "arrogant" and of failing to realise the damage Ms Akiner is causing to the reputation of SOAS.


In a statement to The Muslim Weekly SOAS reiterated their stand and say they have not received further evidence from Mr Murray. "The allegations against Shirin Akiner contained in Craig Murray’s letter to Colin Bundy were unsubstantiated. Professor Bundy invited Mr Murray to supply verifiable evidence to support his assertions but none has been provided."


They have also refuted other allegations that they have in the past been involved in sponsoring school text material including propaganda books by the regime.


"With regard to the mention of Islam Karimov’s publications in Mr Murray’s letter, SOAS has no financial or other involvement with these publications. (One of the books, published by Curzon Press in 1997 as a commercial venture, features comments by Dr Akiner on the dust jacket. The School understands that Dr Akiner was not paid for this contribution to the publication.)"


Highlighting what he sees as the double standards of the School he cites the case of Nasser Amin who was treated quite differently by the School. He sais "Professor Colin Bundy, head of SOAS, is extremely keen to defend Shirin Akiner, Karimov’s Western cheerleader and a SOAS lecturer. But it seems that his defence of academic freedom only applies to those on one side of the argument.


"Akiner is perfectly at liberty to defend Karimov’s right to massacre the opposition, but Bundy just three months ago censured an Islamic student (Nasser Amin) who argued that the Palestinians have the right to use force to resist occupation. You don’t have to agree with the student’s view to find Bundy’s different approach to the two cases interesting...


Any suggestions as to the explanation of Bundy’s contradictory attitude in the Amin and Akiner cases would be interesting to hear. "


The student in question, Nasser Amin, also accused the School’s director of double standards and again called for his resignation.


Mr Amin said "Bundy is not a neutral, disinterested moderator defending all points of view at the School. He is someone who defends free speech when it comes to savagery against Muslims, in Andijan and Gaza, and silences those who oppose this savagery, particularly it seems Muslim students. Shame on him."