A visit to Smithy Fen

A visit to the (mobile) home of Patrick McCarthy, 69, and his wife,
residents of Smithy Fen, Cambridgeshire who are threatened with eviction from their own land and not allowed to maintain their road. 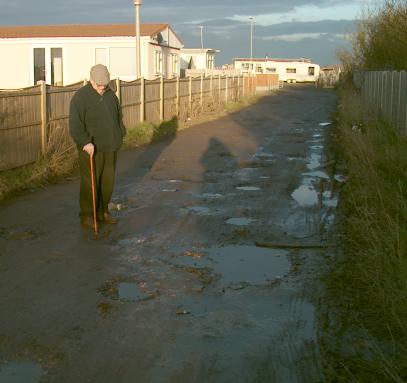 The photograph shows Patrick McCarthy, aged 69, standing in the pot-holed
road that leads to his mobile home on Victoria View, Smithy Fen, near
Cottenham, Cambridgeshire on 5 December 2005.

Patrick McCarthy and his wife live at Smithy Fen. Married for 45
years, they have 8 children and 23 grandchildren. Sitting in his
immaculately-kept home, on his own land, Patrick McCarthy explained
to me that he has 6 heart bypasses and suffers from angina, yet he is
not allowed to maintain the road over which an ambulance might have to
come in an emergency. A few weeks ago he had been taken to hospital
by ambulance. He had to be held onto the stretcher in the ambulance
because of the holes in the road. His wife, who was in the ambulance,
added that the heart monitor kept cutting out because of them. A high
court injunction prohibits maintenance of the road.

After he had mentioned it a public meeting the day before, I
had cycled out to Smithy Fen specifically to photograph this road.
But Patrick McCarthy told me much more than this. Spotting the familiar
Cambridgeshire wheeled bins, one green, one black, in his yard, I asked
him if the Council collected his rubbish. Yes they do, he told me, and,
in common with others on the site, he pays Council Tax.

He and his wife gave a glimpse of a more conservative and traditional way
of life than that of the majority of England, where according to his wife,
the girls are virgins until they marry and drink alcohol only when they
are married, when they might have a drink or two with their husbands.
Despite the presence of a television in their home, both of them objected
to the foul language of the film (Gadjo Dilo, directed by Tony Gatlif,
France, 1997) shown in Cambridge the day before and said that although
they could not tell whether it accurately portrayed Romania, it certainly
did not portray travelling life here.

I made no attempt to clarify the modern legal labrynth - as he told me
that he was given a "licence" that was then revoked in February 2004,
mentioned two public inquiries, spoke of attending a high court case in
London, and said that injunctions are posted up around the site every
Tuesday - because no amount of legal argument can disguise the fact that
there is something fundamentally wrong with the persecution of an elderly
couple living on their own property. However, the sinister-sounding
"licence", reminiscent of the Soviet Union, would evidently be a good
starting point for elucidation of the important legal background.

The Smithy Fen site is a 10 minute cycle ride out of Cottenham, away from
permanent houses. "This site in Smithy Fen is costing them nothing",
he said, commenting on the proposals of Cambridge City Council to spend
250,000 pounds of taxpayers' money on a site near the "Park and Ride"
car park on Cowley Road, and he added that if they closed Smithy Fen
there would be a lot more people stopping illegally in Cambridge because
they have nowhere else to go.

This visit threw into starker relief the insidious nature of
the repetitive "action on travellers" slogan in the local
campaigning tabloid, (Cambridge Evening News) which editor
Murray Morse would have us believe is for their benefit. (

http://www.indymedia.org.uk/en/regions/cambridge/2005/10/326241.html )
The truth seems to be that at least some of those called "travellers"
do not want "action" or Council money, but simply to be left alone.

As I was about to leave Patrick McCarthy asked me to add that other
locals would be welcome to telephone him to arrange a visit.