Evermore spaces for students are being regulated by commercial interests, mediating so-called public and common space for the benefit of expanding markets and profits. Our ability to participate and interact on our terms, with our environment has been severely undermined. Leisure time becomes an extension of work, studying is quantified by our ability to assimilate and conform to uniformed timetables, common rooms are designated ‘financially not viable’, whilst the bars become corporate money-makers. But not just in universities, all around us, the enclosure of public spaces is ongoing and being resisted.

As the New Year started, a new occupation began. The former School of Slavonic and Eastern European Studies (SSEES) located at 21-22 Russell Square, London which had been vacated some months previous, was occupied by students and non-students, aiming to create free accommodation, denied by speculative property prices and in refusal of the debt trap exacerbated by the creeping privatisation of education. We seized what has been denied, and we don’t seek to re-create private property, but rather, to realise a new radical, public space for all.

Following on from and inspired by previous occupations for use as social centres in London and further a field, our dream is to actively involve not just ourselves but everyone who seeks and is willing to participate in a reformation of space, contesting that space for the development of collective social and political needs.

We reject all forms and systems of domination and discrimination including, but not limited to, patriarchy, racism and religious fundamentalism of all creeds. We organise collectively and welcome people to come and contribute ideas and energy to the time and space we have at SSEES. We hope to re-make our world for the benefit and enjoyment of all. We welcome you to get involved! 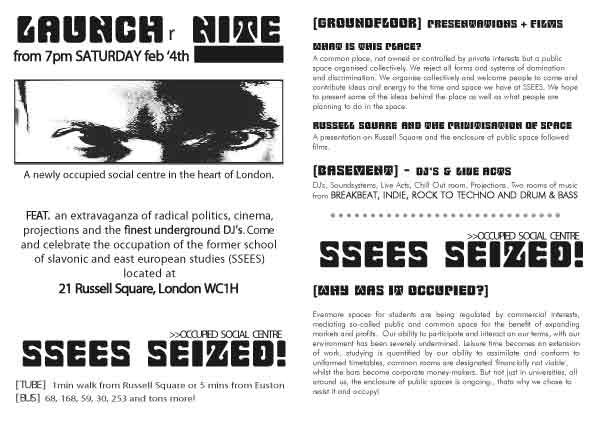