WHAT 'IRAN' IS REALLY ALL ABOUT

Any intelligent, informed person will have realized by now that the sabre-rattling warmongers in Washington DC and 10 Downing Street are planning a military attack against Iran in the near future. 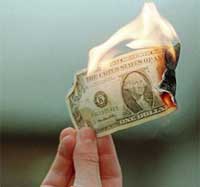 The Israelis are noisy enough in their threats to conduct an air-strike on Iran by the end of next March and since June 2005 US strategic forces have been prepared to launch an attack using not only conventional weapons but so-called 'tactical' nukes and nuclear 'city-busters'.

If the planned attack is launched, it will be the first time since the dropping of atomic bombs on Japan that the USA will have again used nuclear weapons. The first time they did this it was against a country with which they were already at war. In the case of Iran, they will do so against a non-nuclear country which in no way has committed an aggression against any other country, least of all the US.

All the huffing and puffing presently going on about Iran's contravention of the International Atomic Energy Authority's regulations is not only patently untrue, it hides a much more machiavellian purpose. It will give the USA the legal semblance for making a nuclear attack.

Iran has been on the 'neocon' nazis hit list for a long time. Through relentless scheming to ensure that their Hitlerite PROJECT FOR A NEW CENTURY is fully adopted as official doctrine attacking Iran is part of the "permanent war" strategy now influencing the Pentagon . A strategy, that is, of permanent war lasting for the next 20-30 years!

It was for this that the Bush/Blair Axis of Evil was preparing us after the premeditated, staged attack of 911. When serial-killer and arch war criminal Blair talks about the rules having changed this is what he means: they CHANGED the rules to the way THEY would like them in order to sell to their public an artificial "War on Terror" whose real purpose is to prepare it for the USUK's intention to conduct decades of RESOURCE wars over vital strategic resources such as oil, minerals and even water.

In the Middle East the name of the game at present is Oil, bringing in all the major petroleum companies. But now up comes another problem: the Euro has fast come into competition with a seriously ailing dollar and is now threatening the ol' greenback as never before.

What you and I are seeing played out before our eyes is an Empire in its death throes, lashing out all around it to the bitter end. So desperate has it become that it is now preparing to use nuclear weapons to subjugate the world by the ultimate atomic terror.

There are encouraging signs that powers such as Russia, China, India and Brazil will, at the IAEA in early February, now defend Iran's right to develop a peaceful nuclear programme. If that should happen, the USUK will fail in its plan to bring about economic sanctions (themselves a serious killer weapon as sanctions in Irak proved) through the UN Security Council.

If matters reach that point we will all see the USUK wolf baring its teeth in preparation for another illegal war against a non-aggressor. Either the USA and its unholy 'coalition' of the blackmailed with its Number One quisling, Blair, (the Beast and the Whore of Babylon?) will, together with Israel's nazis, unleash a blitzkrieg ... or will Israell 'go it alone' but only after having been given the green light to do so?

In any event, a first-strike attack could lead to terrible disaster for all concerned. Even were nuclear weapons not used at its incept a rapidly-escalating war could cause them to be unleashed by either the US or Israel.

World War III would have begun.

That is why a small group of us are desperately trying to get the reality out to the world that the US is already prepared to use the option of nuclear weapons in an attack on Iran. Clearly none of the mainstream media would dare to publish such a reality. In any case, practically every western media hack is directly or indirectly on the payroll of Blair's and Washington's War Party.

The only way we can get this information out is through activating a self-motivated group of bloggers and mailers through the Net.

I would therefore ask everyone who reads this blog to take the message and run with it. There is only a little time left.

The following article describes the Iranian Oil Bourse quite well, worth a read:

"China and Russia, longtime allies and trading partners of Iran, signed on to a statement that calls on the U.N. nuclear watchdog to transfer the Iran dossier to the Security Council, which could impose sanctions or take other harsh action."