Images from the Peace Vigil organised in Aberdeen on February 1 2006 , as part of dozens similar ones across the UK, to commemorate the 100 dead British servicemen and the thousands of dead Iraqi civilians, since the invasion and occupation of Iraq in March 2003. 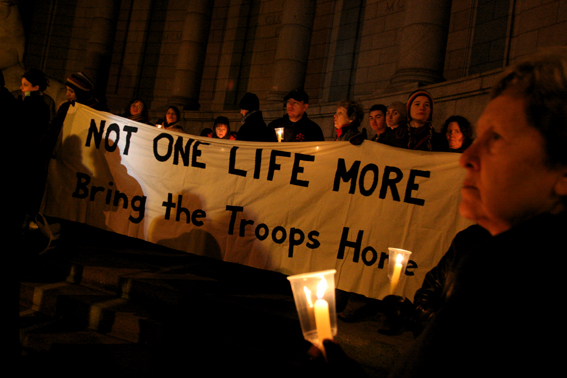 Most people were strongly in favour of pulling the British troops from Iraq.

Britain lost its 100th soldier in Iraq on 31st of January 2006 and on February 1st , there were a large number of vigils across the UK to commemorate the fallen soldiers and the dead civilians of the illegal war on Iraq. The names of the hundred dead soldiers as well as hundred names of the thousands of dead Iraqi civilians were read out loud in a sombre seremony. The Aberdeen vigil gained further poignancy from the fact that the 99th dead soldier was a 22 year Allan Douglas from Aberdeen.