On 25th January the last out of eight British witnesses (and one from New Zealand) gave their testimonies about the bloody night time raid of the Genoa Social Forum and Diaz schools in Genoa during the 2001 G8 Protests. The trial of 29 police officers (including many senior ones) for various crimes of brutality and fabricating evidence has been running now since April 2005. The first witnesses gave evidence just over three months ago and it's expected that this phase of the trial will last until the early summer. In the raid on the Diaz school over 90 people were arrested. Over 60 people suffered injuries after police savagely beat people, some still in their sleeping bags - 31 people were taken to hospital, three of them in a critical state. Some are still receiving medical treatment. Running in parallel is also the trial of yet more police and others accused of beating protestors who were held at the Bolzanetto detention centre after the protests and the raid.

Meanwhile in Switzerland the trial of policemen accused of cutting the climbing rope of Martin Shaw during the Evian 2004 G8 protests will take place in Nyon on 13th-15th February, with several events focusing on G8 and repression taking place alongside (for more see www.aubonnebridge.net). February 4th saw an Activist Trauma Network Gathering in London. The network was formed as a positive response to repression, to provide support and advice. 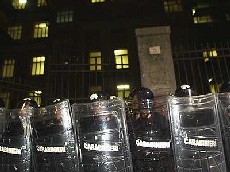 See also: Genoa Justice Campaign | The Committee for Truth and Justice for Genoa

List of British Witnesss Who Gave Evidence and Dates