Black flags to Memorialize Victims of u.s. sponsored terrorist acts up in Cuba

The Cuban People have unveiled a large New Monument outside the u.s. spy base in Havana.
The monument counters a scrolling illuminated propaganda - displayed on the building by u.s. agents. 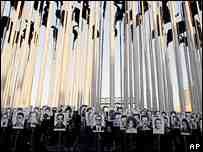 
The New Monument consists of 138 black flags with a white star.

The New Monument symbolizes the more than 3,400 people that have murdered by u.s. agents by violent acts against Cubans since their 1959 revolution.

The New Monument was unveiled during a ceremony organized by the People of Cuba to honor victims of US-sponsored terrorism against Cubans.

"They are white stars over a black background, representing the light of a people that are in pain and mourning for their children and families," said professor Carlos Alberto Cremata, standing next to Fidel.


Fidel had condemned the u.s. propaganda as a "gross provocation"
Mr Cremata is the son of the co-pilot of a Cuban airliner, which was bombed by a u.s. agent in 1976, killing all 73 people aboard.

After the flags were raised, Cubans began a 24-hour vigil in front of the US mission, holding posters with the faces of the people the u.s. has murdered in Cuba.

The u.s. spy base in Havana began displaying propaganda in January.

Fidel described the scrolling propaganda as a gross provocation, and soon the Cuban People turned what had once been the car park of the building into a major construction site.

Huge cranes were brought in and teams of builders worked there non-stop.

Already Cubans have put up scores of posters in the capital caricaturing President Bush as both a fascist and a blood sucking warmonger and a terrorist lunatic.

The u.s. has been trying to overthrow the Cuban peoples Self rule for 45 years and the u.s. has failed because the Cuban People will Not allow it.