From the Bulgarian education system to the Bolivian water supply, capitalists love nothing more than turning an area of life previously financed by universal taxation into a source of profit. The announcement that the government’s new get-tough-on-disabled-people regime will not be implemented by a government department is an indicator of a much wider process - the wholesale privatisation of public services in Britain. The ‘assessment’ of disabled people, care homes, employment and training services, the justice system; all are up for grabs. 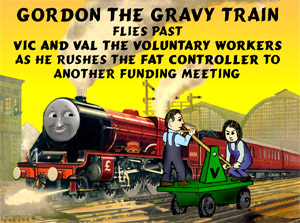 But rather than selling children’s homes directly to the Correction Corporation of America, the government is sugaring the pill by starting the sell-off to charities. Using the rhetoric of ‘local empowerment’ to spearhead this privatisation makes sense for the government because charities are widely trusted and seen as having expertise in delivering services. It also saves money - for a start, charities have millions of volunteers, most of them dedicated to helping others rather than making money. Forcing highly unionised local authority workers into casualised jobs with charities will drastically reduce their bargaining power. At least minimising their wage bill costs will maximise the margins available for profit and management expenses.

Privatising basic services wasn’t possible in the past because of opposition from welfare lobbyists, charities and unions - but that’s all changing as major charities now support the turn away from state provision. An alliance of neo-labour ideologues and ambitious managers in the voluntary sector are embarking on a process that will eventually return social welfare to the 19th century with private businesses making money out of poverty, while charities pick up the pieces where there’s no profits to be made.

While charities traditionally ran some projects alongside campaigning for government action to deal with social problems, many bigger charities now see privatisation as a way of increasing their own power and influence. It’s hardly surprising - the top 1.6% of charities account for 60% of the voluntary sector’s income and these mega-charities are already run like corporations. Their hierarchical career structure for professionals often means that the boardroom is a long way removed from the streets.

The Association of Chief Executives of Voluntary Organisations recently stated that “there may be a dissonance between some of the values associated with the sector, including its independence, and its increasing role in the delivery of services on behalf of government,” but nevertheless decided that the whole thing was “a very good opportunity for the third sector to grow in size and influence”. With a need to retain and expand market share, daft ideas like campaigning and independence soon go out the window.
FAITH, HOPE & PRECARITY

Creating a market is a costly business - and it’s not spent on improving services. It’s spent on creating a whole new layer of managers and consultants to set up and market the new service ‘brand’ to new potential customers, mechanisms that weren’t needed when services were just provided free to those who needed them. But capitalists will always find ways of affording this switch, because the money to be made from cherry-picking most profitable areas from billions of pounds worth of services is a prize well worth winning. The government is currently spending £188m on getting the voluntary sector up to speed on the inner workings of privatisation. A world of conferences and training sessions, forums and partnerships has been established to get community and voluntary groups to accept the dominance of market forces in service delivery and accept neo-liberal ideas as common sense.

The privatisation of the welfare state is also about preventing the possibility of dissent. Neo Labour has noticed that when privatisation begins to bite anywhere in the world, it’s the community groups that make up civil society that are in the forefront of opposition to it. The changes going through now are designed to hard-wire community groups into the privatisation agenda with jobs and contracts at risk which will make it very difficult for these charities to think and act independently of government in the future.

Even the language in this pseudo-corporate world doesn’t allowed dissent to be mouthed without being considered ‘inappropriate’ or ‘unhelpful’. Of course, the ‘partnerships’ that government is creating to implement privatisation are not about sharing real power – they involve infantilising ‘consultations’ where experienced charity workers are asked to stick their views on the wall on post-its by patronising, jargon-spouting bureaucrats who think they invented ‘community’ in 1997. Real decisions are taken by the usual business elites.

Once the market is created, new areas of profit-making potential will exist - that’s when the cost-cutting corporations appear with lawyers holding copies of WTO free competition rules to put an end to local charities delivering sensitive, imaginative local services. Even before this, competitive pressure to deliver a minimum service will soon reduce the flexibility and freedom of workers to act as they see fit, or go ‘the extra mile’ in particular cases – well, you wouldn’t want to bring down your performance evaluation statistics, would you?

And of course privatising basic services takes them out of democratic control. As veteran Glasgow community activist Bob Holman says, “Local authorities are answerable to electors but national voluntary societies are dominated by wealthy and privileged people - huge amounts of state money are now putting even more power in the hands of unelected elites.”

Still, not everyone is going along with the sell-off. Public service unions are getting ready to fight for their jobs and the integrity of the services they provide, and many charity workers who work directly with people in need rather than ‘managing delivery options’ are deeply suspicious of what’s happening. A fight to defend basic, universal services from the tender mercies of the market could be brewing. We should perhaps look to local autonomous groups such as the Brighton Migrant English Project (See SchNEWS 523), which has had great success providing essential social support tailored to local needs – all on a shoestring budget. Given a little money, groups like this could be responding to front-line problems and helping build local communities at the same time, but sadly it’s unlikely because the only profit in it is social, not financial.

* As an example of how a business ethos dominating the provision of social support to deprived areas leads to little of what is needed and a large slice of the available cash ending up in managers’ and consultants’ fat pockets, read about a local quangocracy operating in Brighton called eb4u in Rough Music (www.roughmusic.org.uk/#six).

http://www.schnews.org.uk/archive/news530.htm for the rest of this weeks issue.

http://www.schnews.org.uk/pages_menu/subscribe.htm if you'd like to receive our newsletter in your inbox every week.