More and more of Taser's distributors are dropping the controversial stun gun from their product line, in an effort to distance themselves from inclusion. 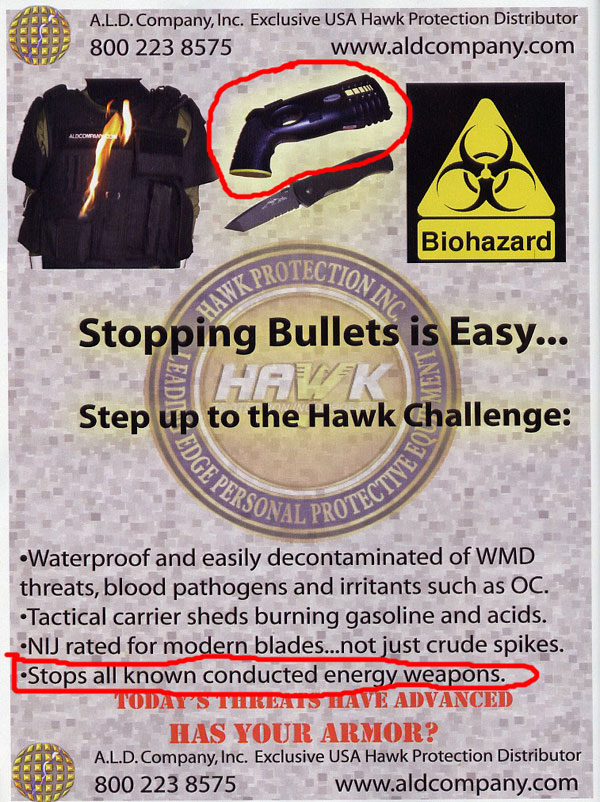 This month’s issue of Tactical Response Magazine, from Hendon Publishing, contains an advertisement from Paul De Nio’s company, ALD. Paul was a distributor of Taser’s to law enforcement. The original relationship with Taser was initiated by ALD’s London Lewis several years ago. The relationship turned acrimonious lately, and ALD has since switched sides.

Their official website, www.aldcompany.com now lists the Stinger Less-Lethal Projectile Stun Gun as the only electronic stun device that they carry. All mention of Taser has been long removed from their inventory and catalogs.

“The monopoly is over....now you have a choice! - A.L.D. is your factory authorized West Coast distributor for Stinger™ Conducted Energy Weapons.”, reads the heading on the Stinger page of their website. With this year’s SHOT Show (Shooting, Hunting and Outdoor Trade Show) to be held in just days at the Las Vegas Convention Center, the appearance of an additional ad indicating that Paul will be in attendance at his company’s booth (# 120) right around the corner from Rick Smith and his Taser booth (# 826), in the Law Enforcement section. Just around the other corner will be Stinger Systems in their booth (#245).

A source has provided that ALD withdrew from participating in Taser’s law enforcement distributor program because of the mounting civil liabilities caused by Taser’s continuing reluctance to redirect their marketing efforts. Taser has been spreading the risks associated with civil lawsuits over to resellers ever since the costs associated with the number of these suits and defending themselves has skyrocketed. One industry insider has been quoted as saying “…it is estimated that a full quarter of Taser’s income is being spent to cover litigation costs.”

Taser International has been quick to announce that twelve of the scores of civil lawsuits where Taser is a defendant have been thrown out or settled without admitting blame. Market investors in their stock, have taken a very cautious fingertip hold on their shares so that when the inevitable jury concludes Taser is at fault, they can dump their holdings with a minimum amount of pain. All eyes are on the next trial.

Stinger Systems appeared on the horizon just a couple of years ago. Even with several lawsuits filed against them by Taser, they have actually produced a product to compete head to head with the Taser Flagship X26.

In response to the challenge, Taser’s PR machine is trumpeting the next generation of weapons; a new, smaller Taser. This unit utilizes the same 30 year old technology in a more compact package. Their PR efforts of late have been nothing more than reprinting of news articles detailing death-free Taser usages. All this at the expense of their halted research into the promised Taser Area Denial Land Mine and the wireless Taser extended range projectile.

As a spectator sport, Taser watching, even on the television show “COPS” has become boring. A welcome should be extended to competitors in this market. An alternative is seriously needed.

About the author:
“TASER IMHO” is the pen name of a freelance reporter living in Arizona. Having followed the exploits of Taser International and its founding family the Smiths for several years, the decision was made to put forth in this media an opinion on the subject. Often critical and controversial, the facts exposed and the sources for them are currently being investigated by private investigators hired with Taser’s approval to track these articles back to their source. All attempts so far have failed. The 1st amendment to the Constitution affords all of us protection from governmental interference and ensures us the right to speak our mind.