The social threat of tracking technologies

Radio-frequency Identification (RFID) tags, using a tiny chip with an aerial that can be placed on just about any object, and having proved their usefulness for stock control in warehouses and supermarkets, are fast becoming a tool for state and corporate people-tracking. 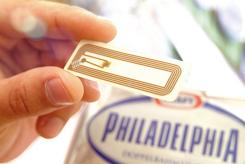 Largish RFID tag - they are getting smaller...

Tags already in common use can be read at distances of tens of metres, and battery-powered tags readable at several hundred metres are also becoming feasible.

RFID tags in passports are supposed to be the next big thing for governments who want to be able to read ID and biometric data at a distance. Home Office Minister Andy Burnham, one of the MPs who is pushing forward Labour's plans for a national ID database and card in spite of widespead opposition, has admitted that contactless/proximity chips will soon be used in passports. This is supposedly intended to prevent identity theft and improve 'security', but a Dutch smartcard company has already managed to read a new Dutch RFID passport from 10 metres and cracked the encryption in 2 hours, revealing date of birth, facial image and fingerprint! If RFID is used in national identity cards, continuous tracking of entire populations is not that far away.

As reported last summer, in an Adsa/Walmart distribution depot in Wigan, warehouse workers are already being tracked continuously by RFID and told which goods to load up by a computer-voice through a headset they have to wear. Asda then used this tracking information in a 'time-and-motion' study and reckoned that workers could load 1400 cases per hour rather than 1100, for the same pay of course. This means 10 hours work is being done in an 8 hour shift, or put another way, 5 workers are now supposed to do the work of 6. Workers who can't meet these targets are 'let go', according to the GMB union. Workers have organised against this, which resulted in suspension of the union rep. and further industrial action. RFID can also be used to harass workers by monitoring toilet breaks etc.

Another tracking technology, global positioning systems (GPS), is an additional threat to the autonomy of mobile workers in buildings and on the road. This satellite-based tracking could soon extend to all drivers, as governments aim to have new vehicles fitted with GPS for taxing and 'pay-as-you' road tolls, so they say, but easily open to use or abuse by cops, insurance companies, or any public or private snooping body. Organisations like Friends of the Earth have actually welcomed road charging (presumably based on the possibility of pricing heavier vehicle users off the road) so putting environmental concerns above privacy, it seems.

And before we go, let's not forget the mobile phone. When your phone is on, it makes itself known to the nearest cell antennae. A company is already offering a service for people-tracking using this information.

10th Feb 2006.
"A Cincinnati video surveillance company CityWatcher.com now requires employees to use Verichip human implantable microchips to enter a secure data centre. Until now, the employees entered the data centre with a VeriChip housed in a heart-shaped plastic casing that hangs from their keychain." Read more at: