Death in Plumstead. The Muslim demo that the corporate media ignored.

Last Saturday the corporate media were going into an racist feeding frenzy at the Danish Embassy. Meanwhile a bigger (and just as angry) demonstration by Somali Muslims was taking place at Plumstead Police Station. It went unreported except for here, a left paper and a Somali youth magazine. It seems that the death of an innocent young man in suspicious circumstances is just not newsworthy if he is black. 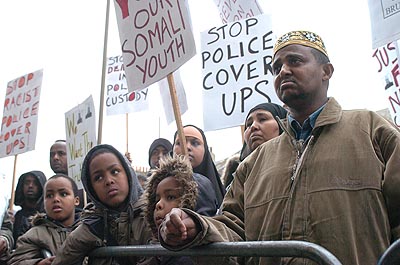 Mourning a loved one. 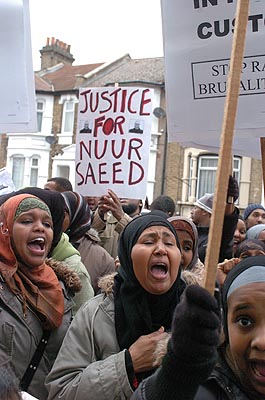 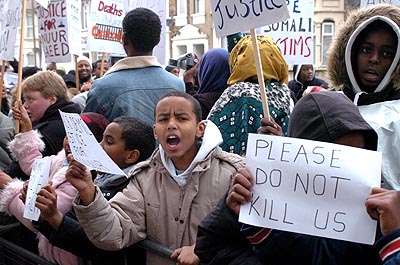 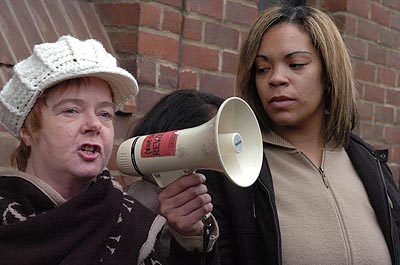 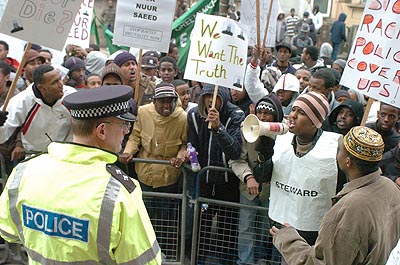 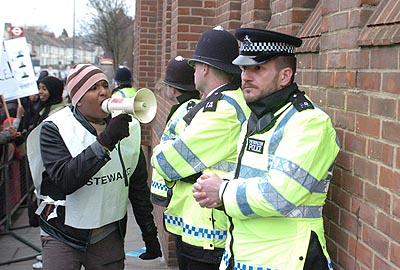 The robbers who shot dead the WPC in Bradford allegedly have links to the Somali community in the Woolwich/Plumstead area. The local youths have accused the cops of being out for revenge and running a racist vendetta against them. On January 10th Police raided a house in Plumstead looking for a suspect. Alone inside was Nuur Saeed who was unconnected to the accused but later found outside seriously injured. It seems he fell head first from a second story balcony. He died on January 22nd from a massive brain injury.

Back in August another young black man died here in unclear circumstances. Paul Coker died on the floor of a cell in Plumstead nick. His mother and sister are at the demo and address the crowd, which are several hundred people. They are experiencing the same unaccountable wall of silence that the de Menezes family are so angry about. The family of Nuur Saeed have all this to come. Right now they are still coming to terms with the death of a loved one. His friends and the local community are furious.

Several hundred people join the demo over the course of the afternoon. Dozens more who are not prepared to stand in a pen hang out in the vicinity. The Police have clearly been told to be on their best behavior. They keep their distance politely negotiating with the organizers throughout the event. At one point local youths block the road, which is one of the main routes into London. Five van loads of TSG (goon squad) cops show up and are seen jogging into the back of the station with their kit bags of riot gear. In the end they don’t get deployed as the demonstrators unblock the road voluntarily as the demo draws to a close.

I get talking to some of the demonstrators about the general situation. Many of them were on the regents park demo the day before. They are angry and insulted by the Danish cartoons. However they are equally unhappy that the media gave all the attention on that demo to a tiny group of extremists from Al-Majihiroune. Today the media are again camped out at the embassy waiting for the Jihadists to provide them with some easy scaremonger headlines. The death of Nuur is ignored, sending a clear signal that Muslim lives are just not important. Hardly surprising that these kids feel angry and alienated?