ohn Howard's recent appearance on the Australian media was noted by his transparent attempt to portray grief and 'genuine' concern. The Australian Prime Minister feigned choking-back tears as he pleaded with Australian youth not to contemplate smuggling drugs. Howard’s insincere performance was in response to (anticipated) judgements handed down to members of the ‘Bali nine’ in an Indonesian court. The events that led to Australian youths being fed to the barbaric determinations of a thoroughly corrupt and primitive legal system should not pass without scrutiny. The actions of the Australian Federal Police require an independent and thorough investigation. The lives of Australian citizens should never be surrendered to foreign powers when discretionary prerogatives lie directly with Australian authorities. He is not here to help you! 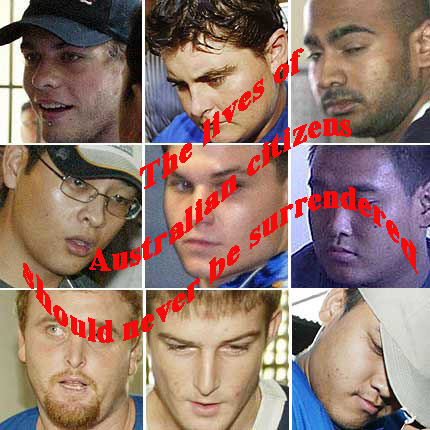 AUSTRALIA: The damning aspect of this case for the Australian government is that a decision was made to ‘feed’ Australian citizens to the ‘dogs’ when numerous alternative options were available. It was information received (locally) from the parents of one of the drug couriers that alerted Australian Federal Police in the first instance.

It was not unreasonable of the parents to expect Australian authorities to have saved their son from the barbaric laws of a foreign nation. However, the AFP (under Mick Kelty) chose to inform Indonesian authorities of the actions of this group in the full knowledge that they would face the death penalty when apprehended. Furthermore, there is no doubt that the Australian government was fully aware and possibly involved in the decision to abandon citizens to a foreign power.

Information supplied in good faith to Australian authorities by concerned Australian parents resulted in a nightmare scenario that will continue to haunt them for the rest of their lives – for these parents the loss of trust in Australian government and institutions is complete. All Australian parents take note, the AFP are not to be trusted with the lives of your children or loved ones; they have a political agenda in which the lives of Australian citizens are only a secondary consideration.

Political expediency is more important to the Howard government than the lives of Australian citizens. In order to highlight the duplicitous nature of John Howard and the contempt he displays for his citizens we would refer to the Indonesian officer directly responsible for the murder of five Australian journalists in occupied Timor. We would ask the commissioner of the AFP why his cooperation with Indonesian authorities hasn’t resulted in the arrest of the known murderer of five Australian citizens. The question is rhetorical as the offender/murderer is known to enjoy a high position in Indonesian government circles and the protection that position affords.

It would seem that the attitude of Australian authorities to ‘justice’ follows a two-tier system; one law for the rich and powerful (local or foreign) and another for the average citizen. Those who are able to insulate themselves against the ‘law’ and those who are at the mercy of despicable forces that would sacrifice the lives of Australian youth to further their political aims. There is no doubt that John Howard’s administration is the most loathsome and callous the nation has ever known.

In view of the now close relationship the AFP enjoys with Indonesian authorities (purchased with the lives of our youth) we would expect the arrest and extradition to our shores of the Indonesian murderer of the 'Bilboa five'. Failure on the part of government to address this heinous crime, regardless of the present position of the perpetrator, would clearly indicate a double standard and the inability of Howard to assert Australian rights in critical situations. Furthermore, it would confirm Howard’s obsession to pursue his personal political agenda at any cost.

The Australian public expect their leaders to serve and protect them at home and abroad. We would also remind Howard that David Hicks deserves the same rights as those accorded to Lewis (scooter) Liddy, which were clearly spelled out by President George W Bush – "innocent until proven guilty"!

Failure to adequately deal with the above critical issues would result in a severe reduction in public cooperation with regulatory authorities and a further loss of confidence in government. Australia is at present witnessing the slow but steady breakdown of social cohesion based on diminishing trust in leadership and public institutions.

The Howard government’s record of assistance to citizens in unfortunate circumstances continues to be the most appalling in the developed world.

Vindicate the nation and bring a known Indonesian murderer to justice Mr Howard or stand in full view as a duplicitous, cringing, lying, grotesque, despicable coward that pretends to the actual leadership of this great nation. Also, be extremely aware that many real Australians would see you in the dock answering for your crimes in the near future.

fight the drug war at home

Submitted by krak on Wed, 2006-02-15 13:12.
the bali nine should be celebrated as heros who risked their lives to supply people with the drugs they wanted.

the enemy is at home. There are many people right now being torchered in australian prisons for drug cultivation, traffic and use. The first step to stopping people being detained in prisions or set to death in other countries is to abolish the policy of drug prohibition in this country.

Fight the drug war at home?

And before you do that you need to abolish HoWARd the coward.

No one has the right to take a life.

We are all children of our wonderful Universe and unique individuals who are priceless and we have the right to be here. We weren't put here to serve any single purpose, to be used as scapegoats or to be used to make some type of example of for other people in this world or to avoid some type of danger that our government has place them in.

Those young lives in their learning curve stage of life are not the property of Indonesia.

Do you understand that John Howard you coward? Those drugs came from Indonesia.

Any one single person handing our children to people who do claim them is an insult to all humanity. And to every Australian.

God save the community because nothing will save the war criminal John Howard the coward.