Here is a short report and selected pictures from resistance against the Utsubo Park eviction in Osaka, Japan!

This is the real reality of Japan today - a place of economic division, brutality and exploitation. 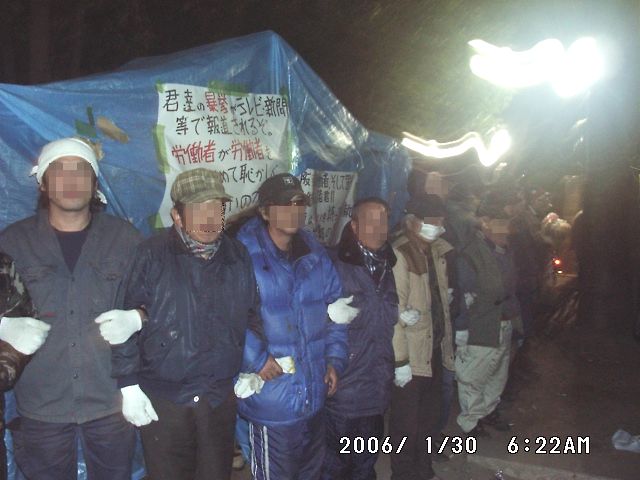 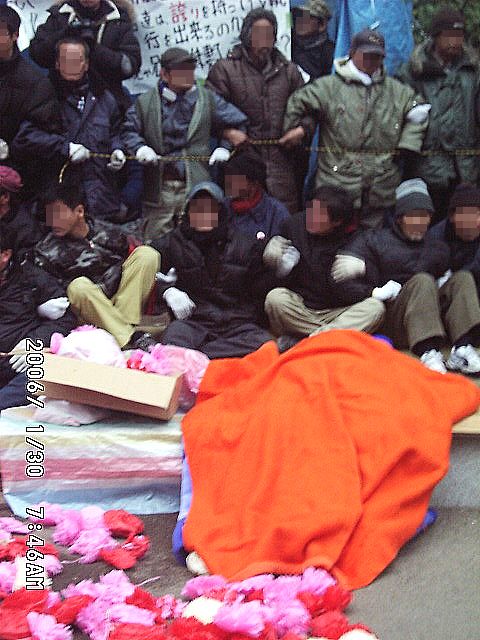 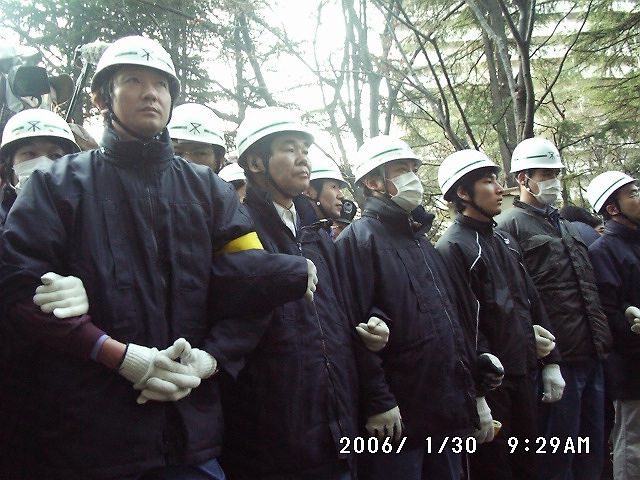 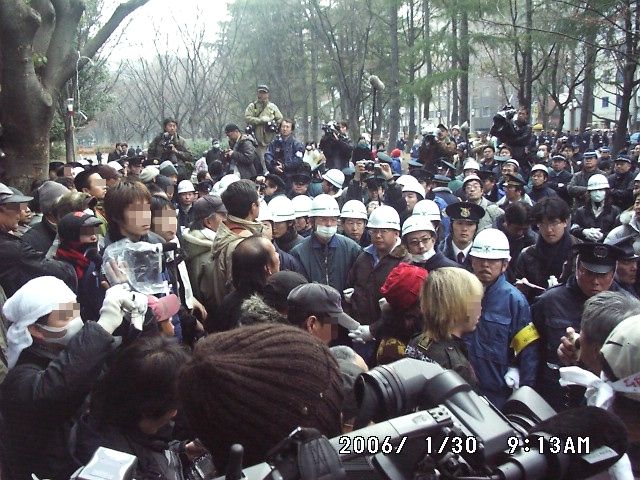 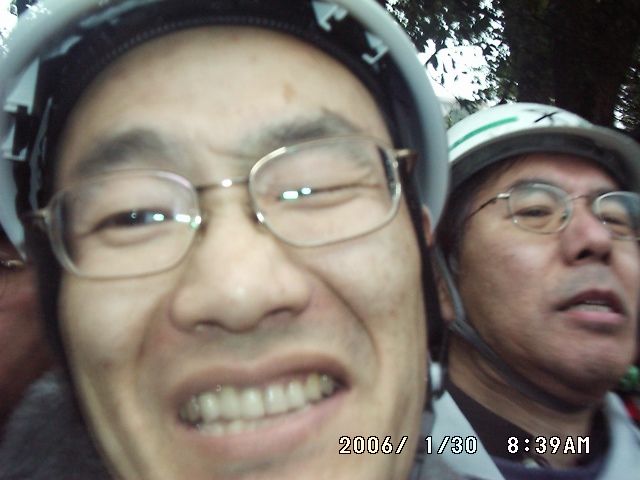 Scrumming with the Goon Squad 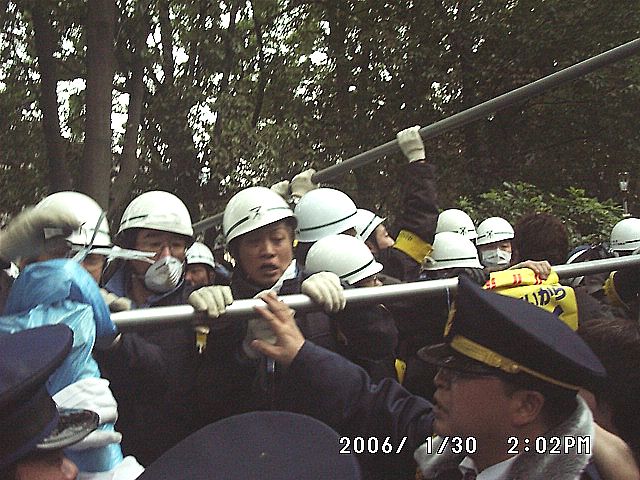 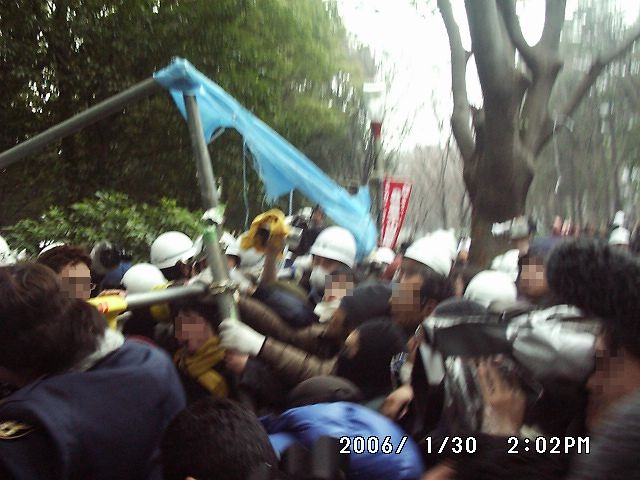 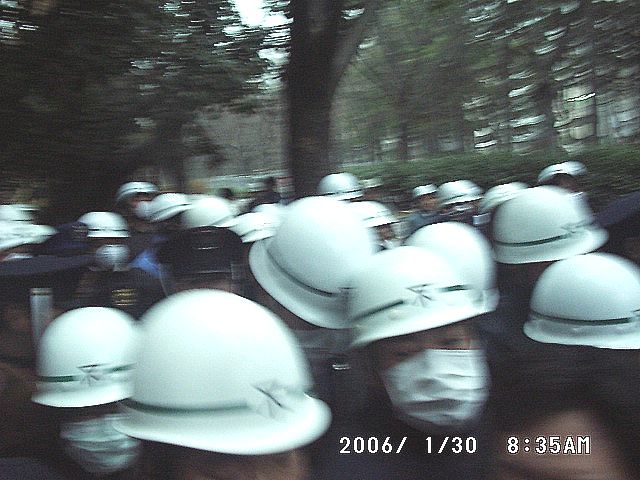 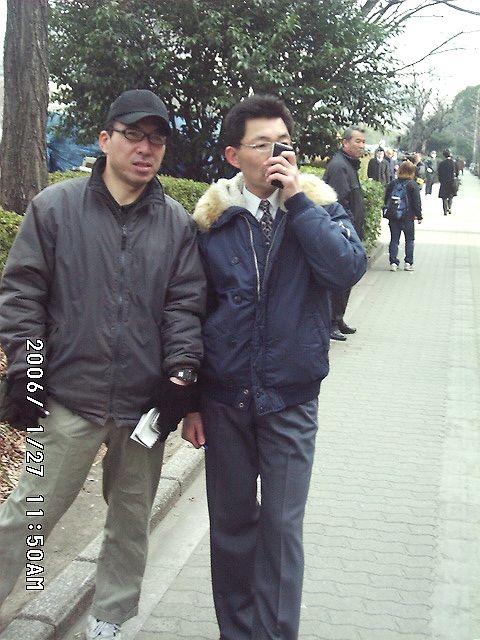 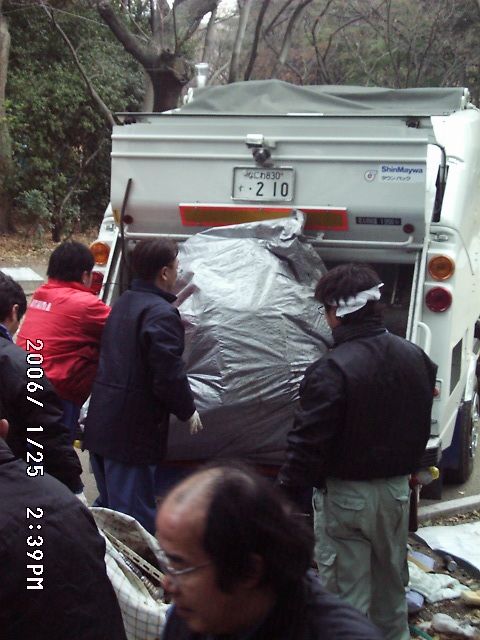 They trash all possessions 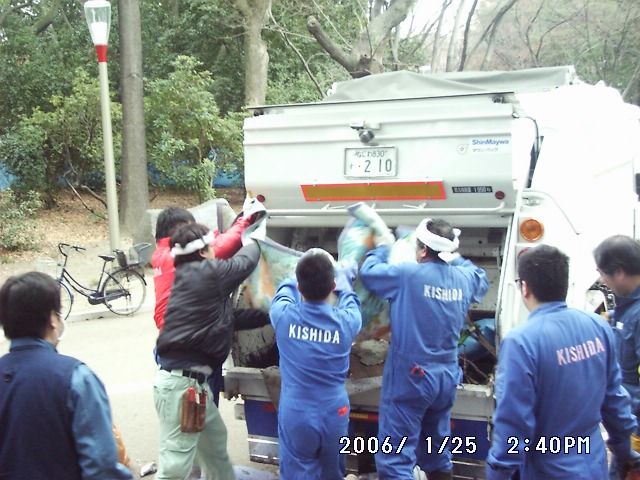 This is the REAL JAPAN!

To those who 'sleep outside'

We are some disobedients who participated in the defense of the
autonomous community at Utsubo park. Utsubo was attacked by over
600 administration officials, guardsmen, police officers and riot
squad in order to clear the park for the city’s upcoming ‘Roses
festival’. The eviction Utsubo comes in the context of a wider
attack on the most exploited in the Kansai region, with the aim of
their institutionalization and control. If the city achieves its
aims and determines the eviction to be within a margin of
acceptable loss, the communities that have cropped up on streets
and parks all around Japan will come under even harsher attack.
This is the perspective under which the park was defended
(involving over 150 people from all over the region, country and
included some internationals). We came to the park with the
following points of unity:
1. The small communities created on roadsides and parks across the
country, especially West Japan, represent less a defense against
the worst conditions of industrial capitalism like dispossession,
poverty and other social ills, addressable by NGOs, Christians and
other pity rackets, but are more accurately an attack on this same
poverty, a dash for a better life, a life surely closed to the
poorest of workers and non-workers if they do not attack and seize
it for themselves.
2. Blue tents are by no means vision of a better future; they
represent a meager communist process, against isolation and the new
estrangement, impressive but still inadequate given the advanced
state of their inhabitants’ dispossession. The communities
characterize themselves by improvised, bric-a-brac living, by
common defense against assault by the police and/or rampaging
teens, by camaraderie, sake, relaxation, games and fun. It is no
wonder that the squatting poor all over the city organize amongst
themselves and easily become close; they are some of the last in a
society devoured by the work imperative to question its
assumptions. Even the so-called ‘prosperous workers’ have no room
for gardens in their concrete boxes!
3. The above forms the basis for our participation in the defense
of the parks. We think these perspectives should be generalized
along the spectrum of all the exploited, all those who are forced
into lives of endless work, spurred by the continual, violent
dispossessions of capitalism, which leave few alternatives besides
work or die. We say:
Burn your rent contracts!
Occupy social space!
For a beautiful life!
4. It follows that we make no demands to the administration, only
of ourselves.

The night before the eviction we gathered in the lightless park.
Some raged at the coming dispossession and violence, smashing parts
of the park, tearing down the barriers the city had set up to
‘enclose’ the park, to arrest everyone inside. Trash was strewn
everywhere ‘the city is trash’. Every obstruction was set up
around the park to impede the progress of the riot squads, the
park’s sparse forest became a spider-web. Graffiti appeared from
nowhere. As soon as the city’s barriers had been taken down they
were ripped apart and re-assembled to become barricades against the
coming incursions. When the city arrived at three a.m. to attempt
to ‘seal’ the park, they were charged and driven back, surrounded
and assaulted by a furious mob. The TV cameras made sure to
broadcast footage of an anonymous comrade who beat the skull of a
city official with a chain (thanks for showing us they can bleed
comrade!).
The night went back and forth. A comrade, Y-san, was arrested
during a riot squad incursion and charged with assault. We were
with the park until the early morning. Tense stand-offs and
confrontations lasted for seven hours as the sun broke over the
horizon. People going to work, and neighbors, walked by the scene
and were inquisitive. The limited numbers of defenders fought for
the park until their arrest, gathering for a sit-in around the
tents. People scattered red, pink and white paper roses over the
ground and their laps. The rose festival was here, it was ours.
As the twenty squatters who lived there were pulled to a separate
location, there were few left to defend the tents. Silent and
shamed public employees tore down the twenty remaining tents as
they were denounced and jeered. The flags of unions who had
arrived too late fluttered as the blue tents fell. Utsubo’s tiny
village was now gone.
At the same time at three other locations around the city, the
administration attacked. Bureaucrats charged Ogimachi park,
Nishinari park and Osaka-jo Park. With Osaka-jo the city’s planned
eviction of five men was known for at least a month and not a
surprise. At Ogimachi and Nishinari, the city charged the nearly
empty parks as most were heading to work or occupied resisting the
city at Utsubo. At both parks a wide swath was fenced off and
declared a ‘no-go’ area, bound for construction. Upon hearing this
news after our long night in the park, we understood that the city
had declared war on refuges against the onslaught of dispossession,
and we felt discouraged at the overwhelming scope of the timed
assaults. This lasted a few days until we made it to the parks
concerned and found that our comrades had already torn apart the
new fences and thrown them in the trash! These comrades understand
even clearer now that the city cannot be compromised with. We
participate now not because the struggle is ours, it isn’t, but we
see how it must become ours; how it cuts across all the divisions
of the exploited and affirms the wealth that we find among each
other.