Braving the bitter cold, rain and even a brief hail storm, a dozen or so people turned up at the Brazilian Embassy in London on Thursday to show solidarity with the residents of Prestes Maia in Sao Paulo, Brazil.... 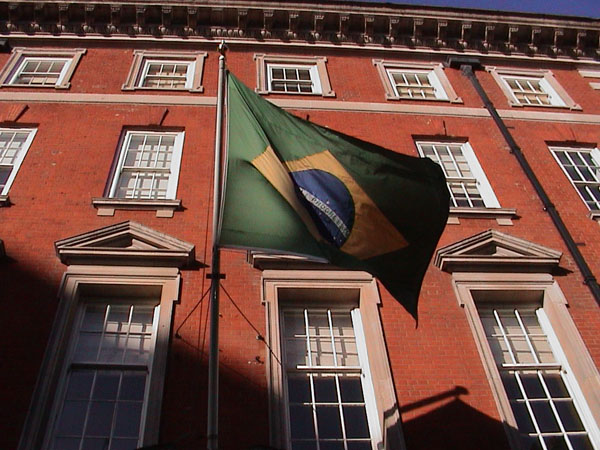 It looked for a while like nobody would come. Some people thought that the demo should be cancelled when the news came in that the eviction of Prestes Maia had been postponed for at least two months. However, the call out for the demo had gone out on a radio show and it seemed impossible to cancel. Instead we decided that the demo would be both a show of solidarity and a celebration.

We had decided to call for demo for 1pm so that we could speak to people who work in the embassy as they came out for lunch and so that anyone who wanted to join the demo could do so during their lunch break. But typically, it was about half an hour latter that people actually turned up.

The idea had been for everyone to build cardboard boxes to build a shanty town outside the embassy symbolising the plight of people evicted for the sake of gentrification.In the event, nobody managed to bring any and the wind and rain would have made it impossible.

Instead we hung the one banner that had been prepared. We had decided that we wanted a fairly generic banner so it could be used again for a future demo. We choose 'Stop the Eviction' on the basis that we could use it when it comes round to our turn to face eviction. However, ironically, our generic banners was no longer appropriate in this particular case since the eviction had already been stopped!

Nether-the-less, the hung the banner and gathered around to take photos as a first step. We'd been there for about five minutes when the police arrived, two of them in a red car which apparently means they a 'diplomatic' police who deal exclusively with protecting the embassies.

The two tried to assert their authority, insisting that the camera was turned off and demanding to know who was in charge. Of course they were ignored and they buzzed around trying to make themselves important for a while.

Meanwhile, somebody came out of the embassy to talk to us, find out why we were there and what we wanted. We told him about the Prestes Maia eviction and asked to come inside to talk to somebody about it. We hadn't really planned this so it got a bit confusing and we ended up not going in at that point but instead got the contact details for the person at the embassy who deals with human rights issues.

We then starting playing the drums (would like to call it samba but three instruments don't make a samba band) and dancing. Two people started performing capaoeira moves and I grabbed some quick interviews with some of the people there.

At this stage the women from the political section of the embassy who deals with human rights issues returned from lunch and we were invited to go in to talk to her. Four of us followed her in an waited while she tried to find a room. We then explained why we were there and were pleased to discover that she knew of Prestes Maia as she had lived in Sao Paulo.

We talked for about a quarter of an hour and she told us that she would make sure that our concerns - that the Prestes Maia building should be left to those that had made it their home; that the building should become public property; that if the residents must be moved out then they should be provided with decent housing; and finally that if evictions became necessary then it should be handled in such a way that the police don't end up killing anyone in the process.

For what it's worth, we were told that our concerns would be passed on to the appropriate officials in Brazil. Whether that is true or not is perhaps irrelevant as our primary concern was to express solidarity with the squatters of Sao Paulo rather than communicate with the oppressors. But if our message really does get passed onto the Brazilian government then that is no doubt a good thing in terms of adding to the political pressure that might ensure a positive outcome for the residents of Prestes Maia and the ongoing fight for housing and dignity everywhere.

We left the embassy in high spirits and our little group of people, who had come together this one time for this one purpose, quietly dissolved back into the anonymous streets of London.

squatters of the world unite

Some photos from the begining of the demo 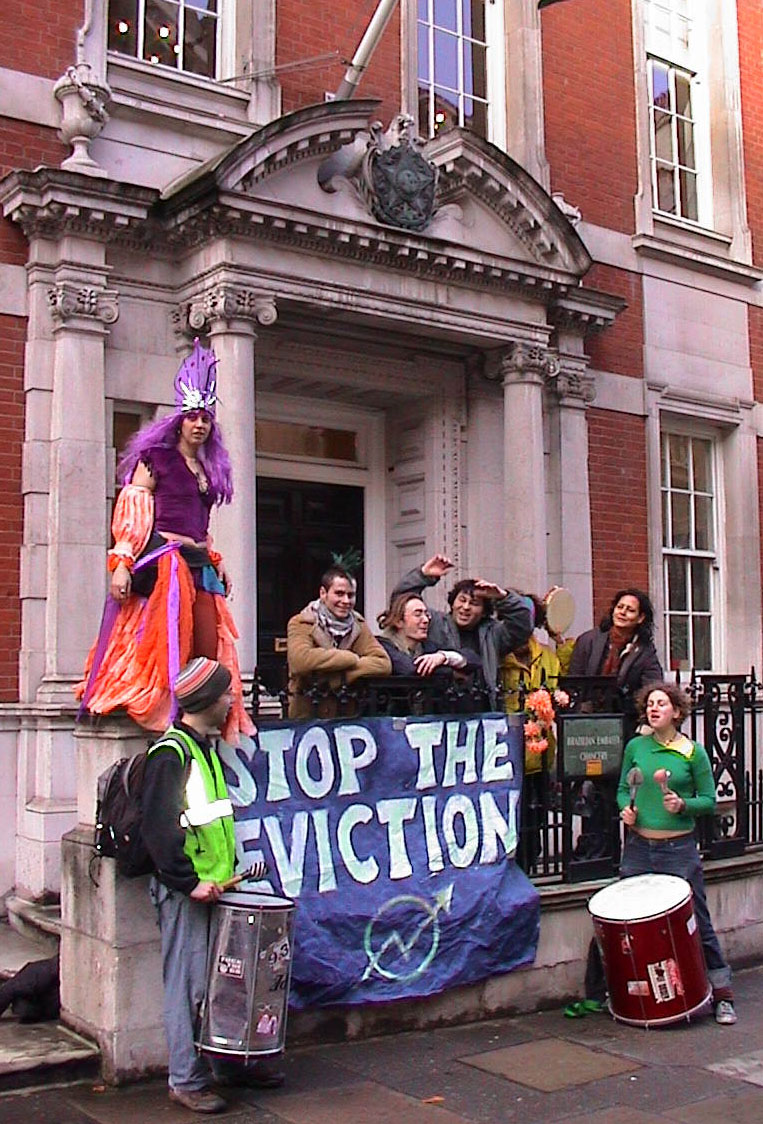 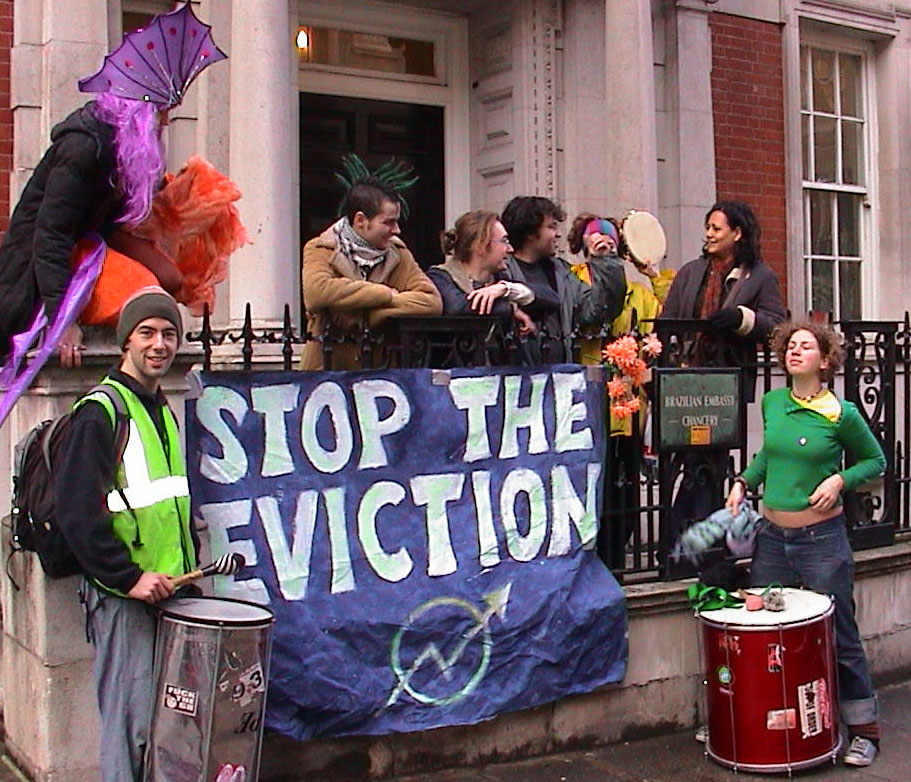 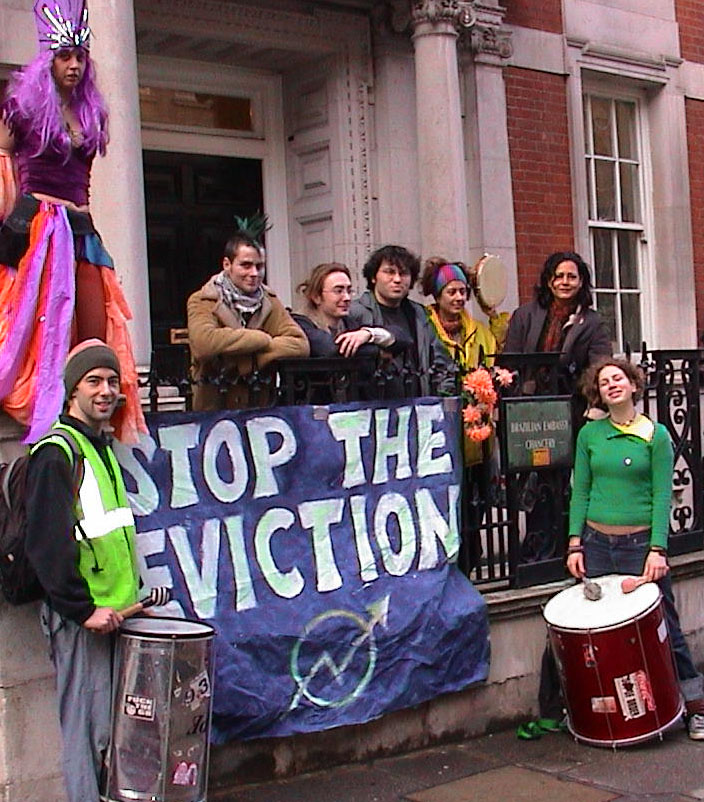 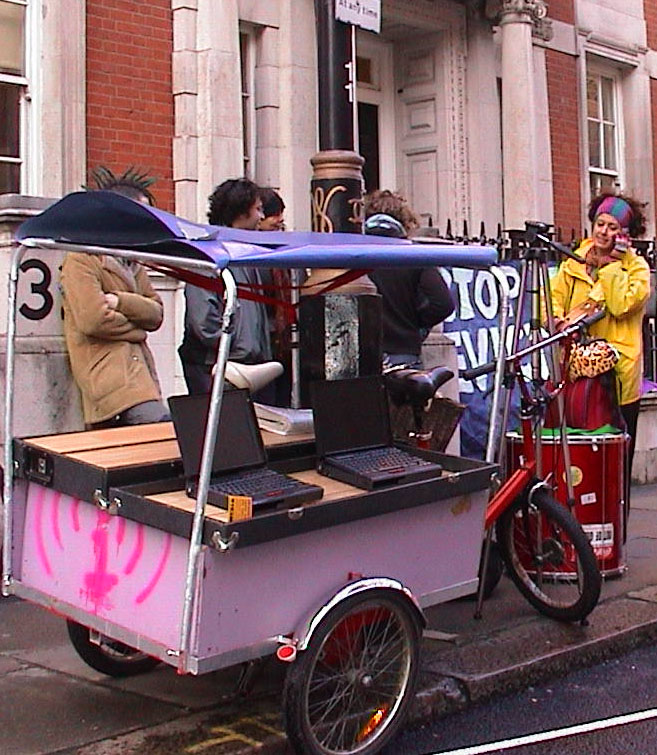 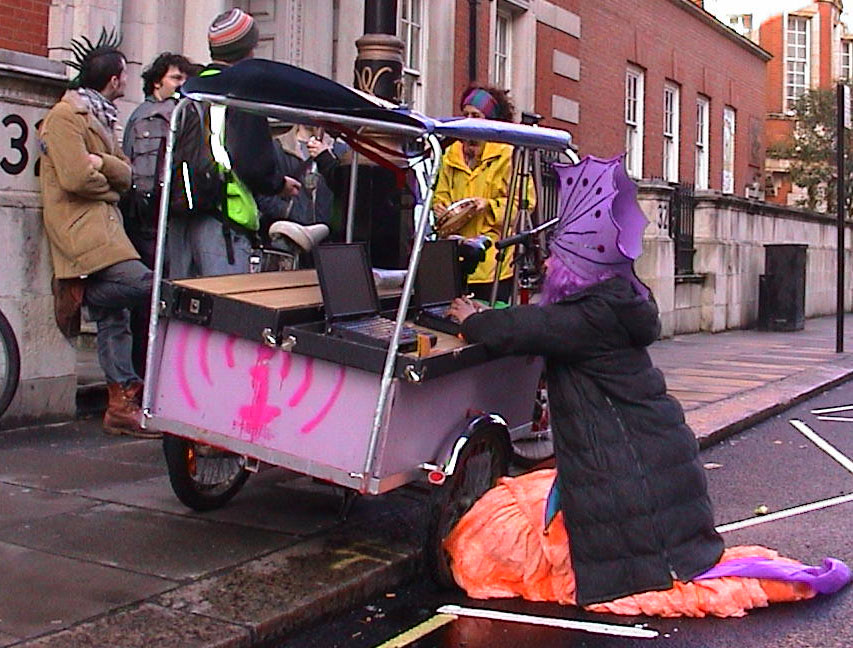 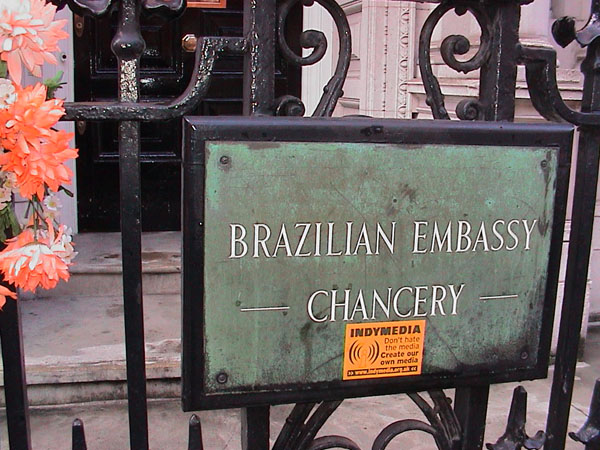 Here are some photos from todays demo outside the Brazilian Embassy in solidarity with the residents of the Prestes Maia squat in Sao Paulo, Brazil.

I would have uploaded these much earlier via the tr(((i)))cycle but sadly there were no open wifi nodes available outside the embassy and when the demo finished I just had to eat and then had to get home to put on a film screening, so.... here they are, finally.... video to follow.

then I forgot to take more photos as usual 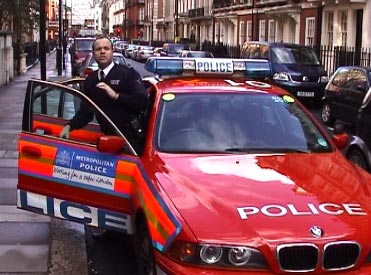 Thinks he is special because he drives a BMW? 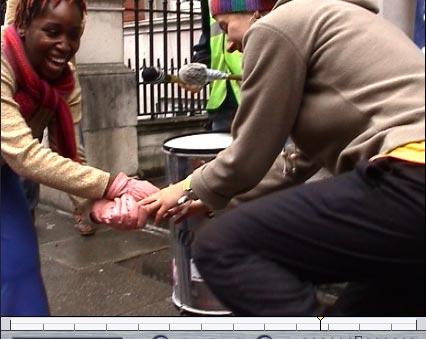 Together we are stronger 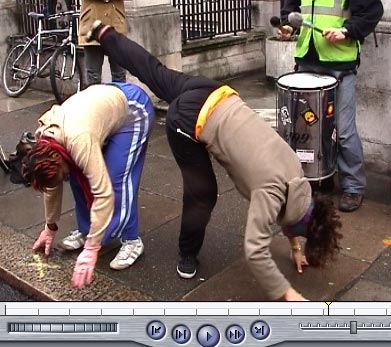 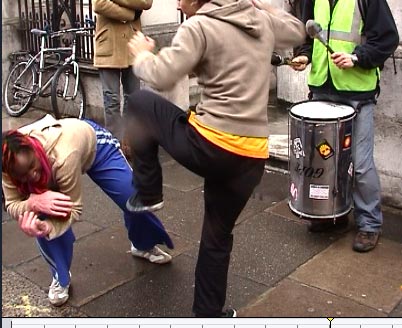 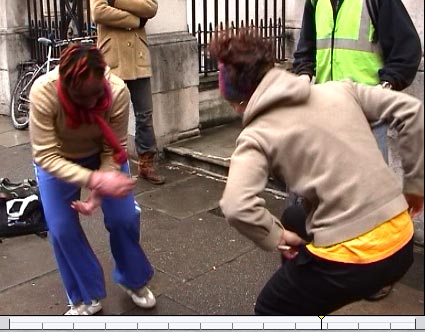 "You put your left leg in, your right leg out" 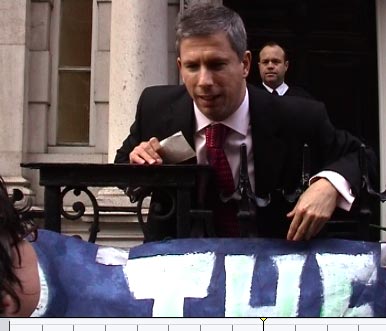 "Did you know the Brazilian Embassy offers samba classes?" 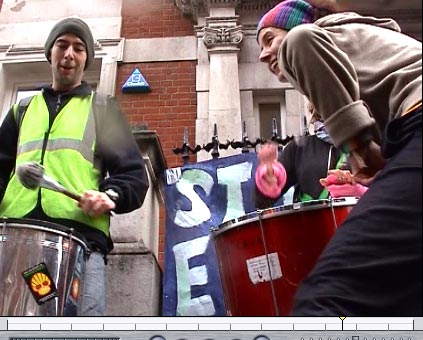 "How many people does it take to form a band?" 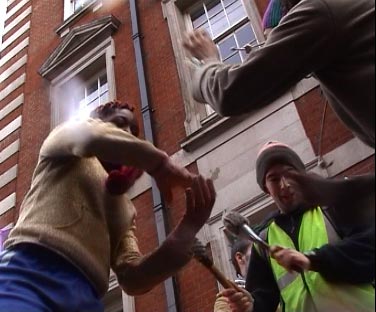 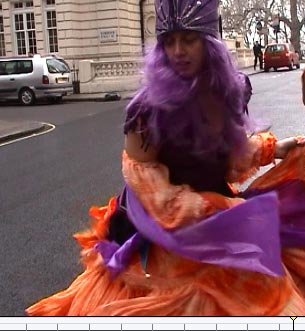 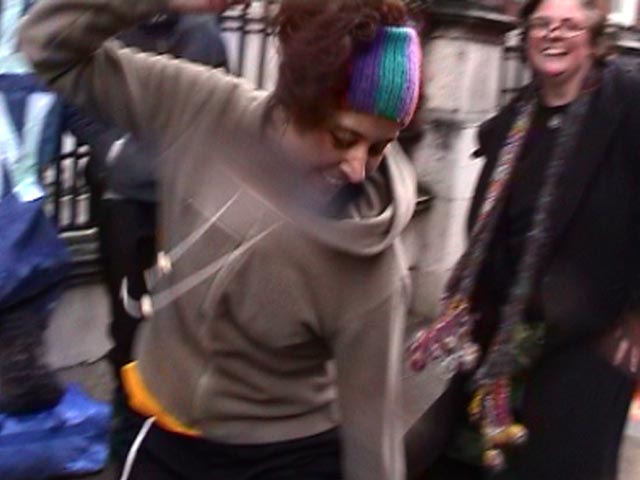 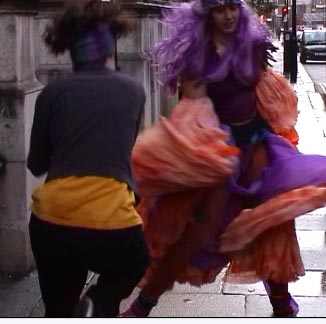 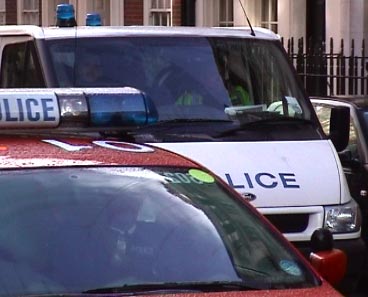 Hello, hello. What's this then? 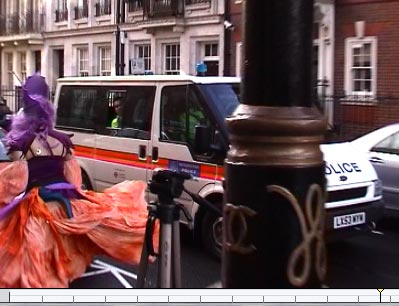 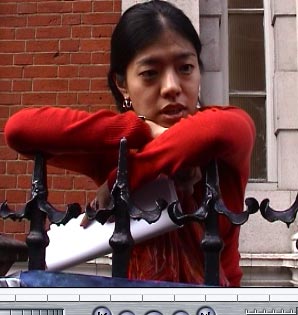 "I'll make sure your concerns are passed on to Brazilia"

Green Street near Marble Arch briefly experienced a short tropicáliation of protest as a tiny samba band provided the beat for carnivalesque costumed dancing and capaoeira. The colouful gathering was to celebrate the cancelation of the eviction of almost 2,000 people from a maasive squatted factory in Sao Paulo, Brazil. The damp and windy London weather ruined plans to erect a cardboard favelas outside the Brazilian Embassy but failed to dampened the spirits of those who came to show their solidarity with the families of Prestes Maia.

Nine minute video available now along with english transcripts for anyone wanting to translate it.