The protest was drawing attention to the abolition of basic safeguards for workers which they say is happening at an increasing rate as profit takes precidence over people.

‘We love enforcement’ Valentine’s cards were delivered to the new HSE chief executive Geoffrey Podger along with a copy of the damning new report "Total Suck Up", which accuses the watchdog of going walkies from its legal duty to enforce criminal safety law in its haste to adopt the government’s business-friendly ‘better regulation’ agenda. 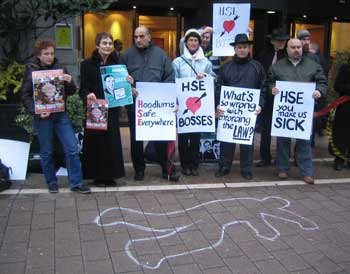 Millions of UK workers are being abandoned by the UK’s official health and safety watchdog in its bid to become more “employer friendly”, safety campaigners have discovered.

‘Total suck up’, a new report from national safety coalition the Hazards Campaign, includes a ‘forensic analysis’ of recent Health and Safety Executive (HSE) policy shifts backed up by responses to over 20 detailed Freedom of Information Act requests. It concludes “HSE has become the watchdog that doesn’t want to bite.” The report lists “10 reasons why HSE top brass make us sick” and calls on HSE to take a lead on safety issues (see below).

The report, to be presented to new HSE chief executive Geoffrey Podger on 14 February along with a ‘We love enforcement’ Valentine’s card, accuses the watchdog of going walkies from its legal duty to enforce criminal safety law in its haste to adopt the government’s business-friendly ‘better regulation’ agenda.

“Prosecutions and convictions for safety offences have dropped dramatically because the safety police are no longer looking for the safety criminals,” says Hazards Campaign spokesperson Hilda Palmer. “The number of charges brought and convictions gained have both dropped by over a third since HSE adopted its new business-friendly strategy, far outstripping the tiny reduction in injuries and ill-health.”

The report says HSE claims to be exploring ‘alternatives to enforcement’, including more ‘naming and shaming’ of safety offenders. But the Hazards Campaign has discovered HSE has recently started ripping up large chunks of its ‘naming and shaming’ database, in a weekly cull of records. At the same time it is showcasing major safety criminals on its website as examples of exemplary boardroom behaviour. The report says private companies are also making millions out of HSE as more and more of its work is contracted out, with this external spend of over £26m now consuming almost 10 per cent of the watchdog’s annual budget.

According to ‘Total suck up’, other new alternatives to enforcement include HSE’s LOPP programme (Large Organisations Pilot Project), which is inviting companies to undertake “self-regulation”. Four of the first five companies to sign up to the scheme, which will soon emcompass 1m workers, have had recent criminal safety convictions. And the Workplace Health Connect scheme, to be launched next week by the government, will carry HSE’s brand but is an entirely private government-funded £20m programme which will undertake thousands of advisory workplace visits but will undertake no enforcement activity.

“The argument for strong enforcement and regular workplace inspections is that it saves lives and catches safety criminals. The only argument for HSE’s new strategy is that HSE is doing the government’s bidding, regardless of the deadly consequences. This has to stop – safety enforcement at work is a law and order issue, not an optional extra.”