After the aquittal of the cops, we can't just let them get away with what they did, we are appealing! 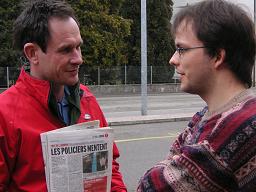 The Police Lie, says this caption from a main centre-right tabloid 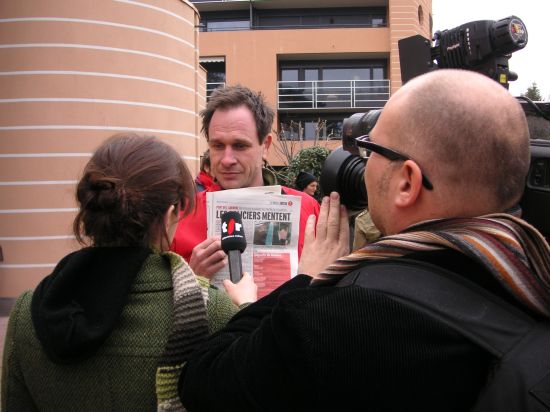 The trail was really front page news across Switzerland, with good coverage

Following the aquittal of two Swiss police officers who nearly killed them in the G8 protests in 2003, Martin Shaw and Gesine Wenzel have decided to appeal the decision of the regional court.

During the G8 Summit of 2003 in Evian, France, a number of activists organised the blockade of a motorway in an attempt to stop a group of delegates from reaching the summit. With the intention of further delaying police and delegates, Martin Shaw from Briton, and Gesine Wenzel hung themselves from a bridge on climbing ropes above a shallow stream. Swiss officers Claude Poget and Michael Deiss were on the scene quickly, and Officer Deiss cut the rope of Shaw, nearly killing him when he fell 23m. A Swiss court case last week, which received large scale national and international media attention, controversially found the officers free of any responsibility for their actions. The activists now plan to appeal.

“The courtcase last week was a pure theater play to manipulate the public opinion and to wash blood off the officers hands”, declared Gesine Wenzel. “This verdict is just further proof that the police enjoy near total impunity in Switzerland. It’s like giving them a blank-cheque for all future abuse and brutality. With our appeal we want to expose the fact that this system is corrupt from top to bottom. ”

The lawyer of Mr. Shaw and Ms. Wenzel, Jean-Pierre Garbade, declared, “The police officers are guilty. The senior officer Claude Poget has made several mistakes. He ignored his orders to open a dialogue with the activists and just threw them off the road instead. He did not evaluate the situation before taking action, as he should have. Secondly, it is inadmissible that he did not inform his subordonate about the presence of the climbers hanging from the bridge. Furthermore, his subordonate Michael Deiss should not have taken action before asking for consent. The decision of the tribunal is mistaken.”

Martin Shaw said, “The attitude of the defense is predictible, but still disgusting. The entire court case felt like a trial against us instead of the police. Blaming the victims is one of the most cowardly things you can do. They say it was the temerity of our action which made us fall, - as if we cut our own rope. Their excuse is that the police were under stress and that they had never seen an action like that before. The fact is that it was more important for them to get the traffic going especially because the G8 delegation was arriving than to protect our lifes. The entire judicial procedure is a systematic cover up of police brutality.”

The Aubonne Support Group states, “Police impunity has a long history in Switzerland. It is the first time in more than 20 years that police officers had to defend themselves for abuse of power in front of the higher court. The judicial system is established in such a way that makes convictions of police officers almost impossible. The prosecution and the court are working on a daily basis with the police, so they will never convict them. The only institution that could possibly be slightly independent is the federal court, but they made a law excluding all appeals in cases against civil servants to the federal court. In this way they have constructed a system that leaves trials against police officers always in the hands of their colleagues.”

“After the G8 Summit in Evian many complaints against police brutality have been filed which were rejected by the chief prosecutor. 15 people in Switzerland have partially lost their eyesight in recent years after having rubber bullets directly shot at their heads. The police always claim they can’t identify the policeman who did it, for example with the case of Guy Smallman, a journalist who was attacked in the 2003 G8 protest with a stun granade that blew his calf muscle apart.”

The answer of the Court de Cassation regarding the appeal is expected for summer. This is the last possible instance of appeal for the two G8 activists. The only legal option that is left if the appeal gets rejected is to open a civil court case against the canton of Vaud to claim compensation, since they are responsable for their officers. However, the chances are not high since the police appear to have complete impunity in Switzerland.

For further information and a political statement:
www.aubonnebridge.net