See www.balatacamp.net for more info and pictures from the scene. 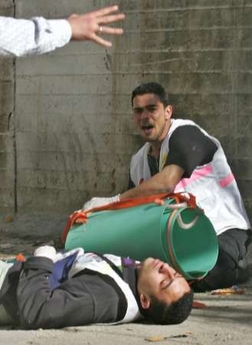 The Israeli military operation "Northern Glory" continued on Thursday when Balata was reinvaded at 1:30am.
Five local Palestinians were killed and many moreinjured during the day.
19 year old Ibrahim Saadi was shot dead while throwing a stone at the Israeli armored jeeps in the Odakhiya neighbourhood. Israeli newspaper 'Ha'aretz' reported that Ibrahim was throwing a firebomb - this is not true.
20 year old Naim Abu Sharif was shot dead by a sniper while standing on the roof of his house.
At 11:45 this morning an explosion set off by the Israeli military inside the house belonging to Muhammed Abu Hamis Abu Amar caused a fire in the house. Occupation forces prevented fire trucks from accessing the area and told them that they will be detonating further explosions in the same house. Emergency teams accompanied by international volunteers treated children in some of the adjacent houses who were effected by smoke inhalation. Neighbours attempted to put out the fire by bringing buckets of water.
At 12:30 the military set off a series of additional explosions inside the house of Muhammed Abu Amar. The neighbors were not evacuated or warned in advance.
At 3:00 the soldiers blew up Muhammad Abu Amar’s house, thus killing three Palestinian fighters who were inside. as Shatiwi, Mohammed Amar and Abu Ali Samiri.
“We were standing in the alley way, everything was quite when suddenly without warning we heard a big explosion and heard gun shots. I then saw Jarar and Ihab liying on the floor. Ihab wasn’t moving.” Wounded Dutch medical volunteer
At 1:00 A medical team including two Palestinians and two international volunteers were trapped in an alleyway adjacent to the house belonging to Muhammed Abu Amar. They were standing behind an Israeli Jeep that soldiers had vacated.
At 2:00 without any warning shots they were fired at and a grenade was thrown at them from around the corner. According to the volunteers the shooting came from the direction of the alleyway where the Israeli soldiers were.
Jarar Candola, an experienced ambulance driver with the UPMRC, was shot in the arm and leg and Ihab Mansour, a medical volunteer working with the Palestinian scientific society, was shot in the head and taken away by the Israeli soldiers.
Also, a twenty-two year old American student received shrapnel wounds to the hand and a twenty-nine year old Dutch volunteer was wounded by shrapnel in the thigh and shoulder.