Mesothelioma is a terminal cancer. There is no cure. It’s only known cause is exposure to asbestos. Symptoms usually occur 10-50 years after exposure to the deadly mineral.

In the UK, almost 2000 people die from mesothelioma each year. This trend is expected to increase until 2020. The TUC have estimated that for every mesothelioma death there are 1-2 asbestos related lung cancer deaths.

Victims are not limited to those who worked in asbestos production or heavy industries, such as shipbuilding, where asbestos was widely used.

Mesothelioma does not discriminate on race, class or gender. The cancer has killed housewives that once washed their husband’s overalls as well as university lecturers, school teachers, entertainers, electricians, miners, dock workers, plumbers, secretaries, doctors and even managers who have worked in offices for the asbestos industry.

In the UK, it is estimated that more people die of asbestos related disease than from road traffic accidents.

In the UK, asbestos cancer could take more lives than a “9/11” EVERY YEAR until the middle of this century - yet there is no government funding for research to find a cure.

Such facts have compelled the British Lung Foundation to organise an “Action Day on Mesothelioma” to create a greater awareness of the disease.

Details of Action on Mesothelioma Day were announced by Dame Helena Shovelton, Chief Executive of the British Lung Foundation at last month’s Parliamentary Asbestos subcommittee. This meeting at Westminster was attended by local MP’s Paul Rowen and Jim Dobbin together with Jason Addy of the Save Spodden Valley campaign- as reported on Indymedia at:

The Turner Brothers Asbestos (TBA) was one of the world’s first modern asbestos factories. First producing asbestos in the early 1870’s, the Spodden Valley saw production end only in the 1990’s. Until 1948, the Rochdale offices of TBA controlled the decisions of its world-wide business operations.

The world’s first Asbestosis death was of a young Rochdale TBA worker- Nellie Kershaw in 1924. TBA recognised that asbestos worker William Pennington died of mesothelioma in 1936. Richard Doll, the epidemiologist who confirmed the link between smoking and lung cancer, discovered in 1955 that Rochdale asbestos workers had a greatly increased risk of lung cancer. -TBA archives show that the company attempted to suppress these findings.

The TBA Rochdale offices were also home to the Asbestosis Research Institute whose work was used to lobby for the continued use of asbestos.

It has just been confirmed that Rochdale Council have agreed to a permanent International Asbestos Memorial close to Rochdale Town Hall.


Nellie Kershaw lies in an unmarked grave in Rochdale Cemetery. At long last, a simple stone will mark the fact that Nellie, and the further countless victims of asbestos related disease, worldwide, will not be forgotten.

A photograph of the protest... 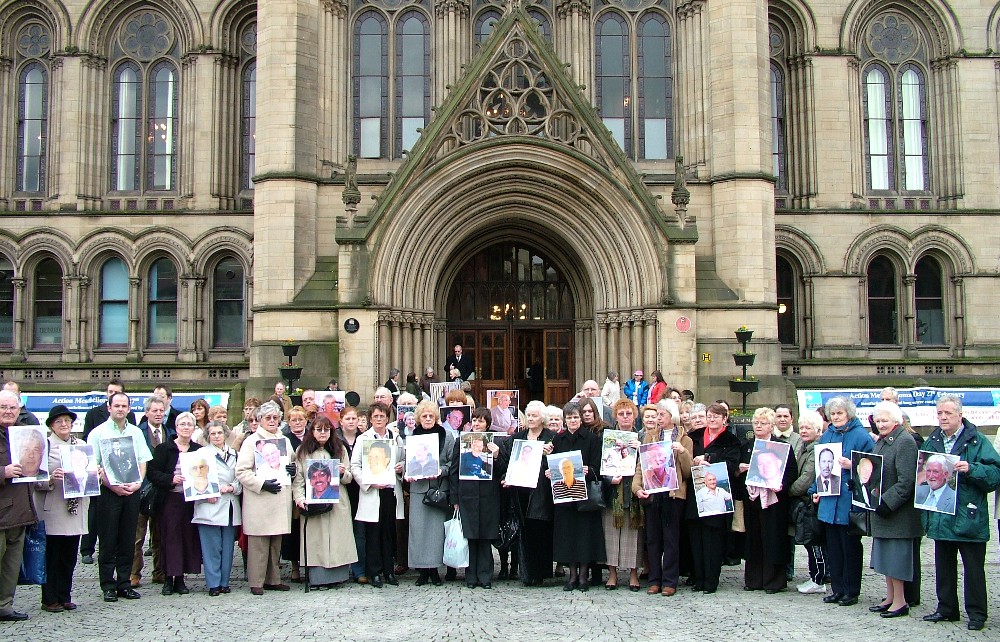 A few of the people who have lost loved ones to the asbestos cancer mesothelioma.

A report of the Manchester protest and meeting...

This week, public awareness has been raised about a terminal asbestos cancer called mesothelioma.

To mark the inaugural Action Mesothelioma Day, a protest and meeting was held at Manchester Town Hall. It was attended by over 200 asbestos cancer victims and families from Rochdale and throughout Greater Manchester. Many had worked at Turner & Newall sites in Rochdale and the North West.

Also represented were other asbestos cancer victims who had not worked in the asbestos industry but had been exposed to asbestos from their work. These included: garage mechanics, painting contractors, school teachers, engineers, construction workers and housewives that had washed their husband’s dusty overalls.

On the steps of Manchester Town Hall, people who have lost family members to asbestos disease held photographs of their loved ones aloft for the press and TV cameras.

The meetings coincided with the presentation of the British Lung Foundation’s Action Mesothelioma Charter to Downing Street. The Charter calls for more research into asbestos-related illness and better treatment for sufferers.

Following the Downing Street visit, a well attended reception was held at Westminster for Parliamentarians.

TV and radio reports included interviews with people who have been diagnosed with mesothelioma:

James Hilditch explained how he was exposed to asbestos over 30 years ago whilst working for a scrap metal company. His employers never provided him with a mask or warned him about the dangers of asbestos. He is now paying for this with his life.

A young-looking 59 years of age, Mr Hilditch described the shock of being told by doctors that he has a terminal cancer. He had never heard of mesothelioma before being diagnosed.

Dame Helena explained:
“We are trying to make sure that younger people, who might be thinking this has all gone away as a problem – particularly people working in the building trade or doing DIY – take proper care.”


At the Manchester meeting Hugh Robertson of the TUC explained that if asbestos regulations are not improved, it is estimated that an additional 8,000 people may die from asbestos disease from future exposure to asbestos. His source for this figure was the Health and Safety Executive Consultation Document (CD 205):

Mr Robertson told the audience that the Government is currently consulting on amendments to the Asbestos at Work Regulations, but many fear that the draft amendments are too weak and enforcement of existing regulations inadequate. This concern was also expressed by Rochdale MP Paul Rowen in parliament last month, as reported on Indymedia and Hansard:

The 31st January asbestos debate in Westminster Hall is reported at:


The Trades Union Congress launched Action Mesothelioma Day with an awareness campaign to highlight the dangers of asbestos that could still be lurking in up to 1.5 million shops, factories and offices across the UK.

Mr Robertson suggested that many employers are either unaware of their legal obligations to manage asbestos risks or are simply choosing to ignore them. To the shock of the audience, it was explained that the average workplace is visited by a safety inspector on average only once every 8 - 20 years. It was suggested that some negligent employers exposing their workforce to asbestos could be safe in the knowledge that they are unlikely ever to get found out.

One million 'Asbestos Kills' stickers and thousands of leaflets have been sent to workplaces up and down the country, so that union safety reps can do more to stop employers needlessly exposing their staff to asbestos...

Professor Thatcher from Christies and Wythenshawe hospital explained that despite asbestos cancer being the biggest occupational killer in the UK- there is almost no government funding available to find a cure.

HSE Kate Carroll from the Health and Safety Executive Asbestos Policy Unit confirmed that exposure to all types of asbestos - including chrysotile (white asbestos)- can cause cancer and that strict safeguards must be enforced to ensure that workers and the public are kept safe.

Mrs Eason, whose husband died from mesothelioma expressed a view held by many at the Manchester meeting:

“My husband, Michael Eason, died from mesothelioma. He was 63 years old. The pain and suffering he endured was horrendous and my son and I are furious that Michael, who looked after himself and never smoked in his life, died because of negligence in his place of work. There are more and more cases of mesothelioma. People must be made aware of this terrible cancer”