Hallmark_cl@earthlink.net
The US and European governments dare to deny this smoking-gun photographic evidence that:
1.--The CIA has been sneaking its prisoners in and out of Europe on cargo transport planes.
2.--CIA and foreign spy agencies work out of the same office (CTIC) in 31 countries.
3.--USA and European Union have an agreement for torture flights. Here is last copy left on the Web.
4.--Here are key passages of USA - EU torture pact. Here's how to download the rest.
Public needs this information. News writers need this information. Investigators need it. 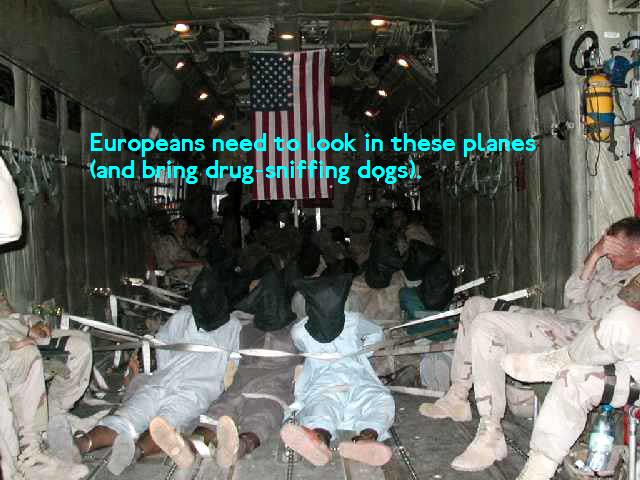 European human rights groups are trying to get governments to look into this.

A CTIC is a joint spy office, CIA plus local secret service. 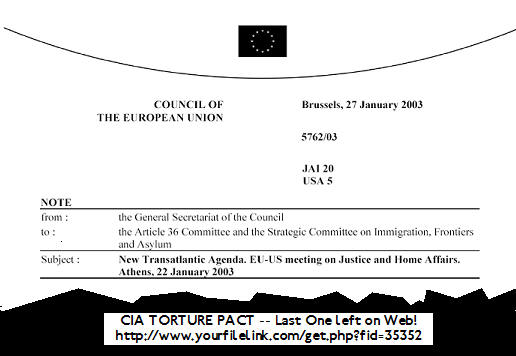 Hallmark_cl@earthlink.net
PHOTO 1 -- PRISONERS ON CIA / US ARMY TORTURE FLIGHT
The US says the planes carry "embassy cargo." European governments pretend to believe them -- and never inspect the planes. But, "Who you gonna believe, them or your lying eyes?" Just look at the photograph. See your flag? See your Stars and Stripes, Old Glory? See the MPs? See the prisoners? All of them (prisoners) are INNOCENT! Innocent until proven guilty, remember? They haven't even been legally arrested. What you see here, though, IS crime in progress. Kidnapping. Torture.

GRAPHIC 2 -- LIST OF COUNTRIES WHERE CIA / FOREIGN SPIES SHARE AN OFFICE
The list shows the 31 countries where the CIA shares an office (CTIC, Counterterrorist Intelligence Center) with the foreign spy agency. Notice that the European countries on the list include the origination points of rendition (kidnap for torture) flights. The North African and Middle East countries include the destination countries, which the US admits practice torture. The CIA pays the bills for the joint offices. Top officials of the countries -- prime ministers and presidents -- have agreed to the CTICs.

http://www.refdag.nl/artikel/1238465/CIA%20spil%20van%20groot%20antiterreurnetwerk.html The CIA's Director of the National Clandestine Center (aka Deputy Director of Operations, DDO), Jose Rodriguez, made his name setting these up.

GRAPHICS 3 AND 4 -- AGREEMENT BETWEEN US AND EU FOR TORTURE FLIGHTS
The US and the European Union signed an agreement on 22 Jan. 2003 that provides further evidence of EU cooperation with CIA torture flights and prisons. I know of only one unedited version of this on the Web. I have saved it and show you how to download it. (Save it to disk, then open it with Adobe Reader.)

http://www.yourfilelink.com/get.php?fid=35352 Less than a month after the agreement, the CIA pulled the infamous Abu Omar rendition in Italy. There is no way the Italian secret service SISMI didn't know in advance, since it shares a CTIC office with the CIA. There is no way Prime Minister Berlusconi didn't know in advance, since his government approved both the Italian CTIC and the EU agreement.

The following is an example of what investigators like the Council of Europe, the European Parliament, the British Parliament, Human Rights Watch, Amnesty International, CIA victims' lawyers in the US and Europe, and others are up against.

A US plane, N8213G, a Lockheed L100-30, serial number 5055 (SEE ACCOMPANYING TABLE), landed at the Helsinki-Vantaa airport in May 16, 2003. This large cargo plane, which was emblazoned with the name "Prescott," may even be the one in the photograph. It is the civilian version of the huge C-130 Hercules military transport.

Asked to investigate, the Finnish defense ministry confirmed that such a plane landed in Finland on May 16, 2003. It was just on a cargo flight, they explained. In a statement issued Nov. 19, 2005, they averred: "No available information suggests that the aircraft in question would have been used to transport prisoners." Cargo planes can carry only cargo, right? Well the photo in this article is "available information." Cargo aircraft are indeed used by to transport CIA prisoners, and not under the most humane conditions, the photo shows.

Now, what information was the defense ministry going on? It seems that the plane's owner, the US "company" Prescott Support, made a request for landing at Helsinki-Vantaa and that the Civil Aviation Administration (Finland's version of the FAA) had received the request on April 23, 2003. Since the application said the plane would be used to carry "embassy cargo," the CAA referred it to the ever-credulous defense ministry, which granted landing permission. That's it. Prescott Support (an untraceable, nonexistent company) said so, so it must be so. How could a phony company lie?

"We do not torture," President Bush declared during a press conference in Panama in Nov. 2005. Yes, and as President Nixon famously said, "Your president is not a crook."

Condoleeza Rice also claims the US doesn't torture. Before Ms. Rice left the US last December to establish a relationship with the new female Chancellor of Germany, Angela Merkel, and to put out some fires in Europe over rendition (kidnapping) and secret-prison allegations against the CIA, Ms. Rice admitted that terror suspects were flown abroad for interrogation but denied they were tortured. She said suspects were moved by plane under a process known as rendition, and she called this "a lawful weapon."

Condoleeza, minister's daughter and genius that you are, does the process in the photo look to you like a "lawful weapon" to be used by an honorable nation under an honorable flag?

The table (click here: ) will prove useful in following (or even writing) news stories about CIA renditions and flights. And there *will* be headline stories and lead stories on TV news.

The table shows the planes the CIA might use to transport prisoners. Some are executive jets -- Learjets and Gulfstreams -- like corporate America uses. Some are large transport planes like the military uses for cargo. As the photo shows, any of them might be used to carry prisoners. ALL OF THEM MUST BE CONSIDERED SUSPECTS.

Planes marked with an "r" are known rendition planes. Most of the rendition planes have not been identified yet, because government ministries like the Finnish defense ministry are covering up or disinterested and the US uses subterfuges like flying the prisoners in cargo planes. More rendition planes will be identified as public awareness grows and as investigations, lawsuits, and prosecutions proceed.

There are 51 different planes in the table but 57 N-numbers (FAA registration numbers, or tail numbers). Thus some planes have duplicate numbers. This is because of the CIA practice of moving a plane to another shell company once it becomes known to the public. You are not supposed to know how people are transported to torture.

There are 26 planes operated by 8 known CIA front companies ("air proprietaries"). The number of planes varies from time to time. The front companies are marked with asterisks (*) at the end. The list is as up to date and complete as practicable. Planes are moved from one front to another in a kind of shell game. The CIA buys and sells planes through the fronts and occasionally creates and deletes fronts. Some of the leasing companies in the list, like ALAMEDA Corp. (which owns former US Marshals Service prison plane N822US), might be CIA front companies that have not been identified yet. (The real cover was not Brewster Jennings but was Burke Dennehy and Paul Jennings.)

Another 10 of the planes are registered to Blackwater USA of Moyock, NC, the famous mercenary (soldiers of fortune) company. This company is an important contractor for the CIA and the US military, providing personnel and training as well as aviation services. It provides aviation services through its subsidiaries, Aviation Worldwide Services and Presidential Airways. (The latter is not to be confused with Presidential Aviation, an aircraft-leasing company owned by the super-rich Mark J. Gordon, who sold his telemarketing company for over $600 million.)

The 26 CIA-front planes and 10 Blackwater planes are CIA frequent fliers. The other 15 planes in the list (26 + 10 + 15 = 51 planes, total) represent occasional leases from companies like Gordon's. For example, N85VM is leased out by Richmor Aviation and is hangared in Schenectady, NY. This plane was used in the rendition to Egypt of militant cleric Abu Omar from Milan, Italy, in 2003. The 22 CIA abductors soon might be tried there in absentia. The plane is owned by Assembly Point Aviation. That in turn is owned by Phillip H. Morse, a Jupiter, FL, inventor/businessman who also made hundreds of millions on the sale of a business (NAMIC USA [cardiac catheters] of Glen Falls, NY) and who co-owns the Boston Red Sox. Asked about his plane's use to fly prisoners to Guantanamo Bay, Morse said, ''It just so happens one of our customers is the CIA. I was glad to have the business."

The rich work for the CIA because the CIA works for them.

The eight CIA shell companies thought to be extant are:

Some of the numbers in the list formerly were registered to a ninth company, PREMIER EXECUTIVE TRANSPORT SERVICES, INC. Its planes have been moved to other companies in the shell game.

The operation of the front-company (CIA-owned) planes is the job of a company called Aero Contractors Ltd, founded by a former CIA pilot. Aero Contractors operates all but one of these out of the Johnston County Airport in Smithfield, NC. The Boeing 737, N4476S (formerly N313P), operates out of the Kinston Regional Jetport in Kinston, NC. Both locations have been recent targets of anti-torture protests. The mailing address and phone number given for the 737's front (Keeler & Tate), by the way, belong to the law office of former US Senator Paul Laxalt of Nevada, once called the "First Friend" for his relationship with President Reagan.

The US Air Force base (Rhein-Main) at Frankfurt, Germany, is the European base of the 737.

Tepper Aviation, Inc., maintains and operates these planes out of the Bob Sikes Airport in Crestview, FL. Tepper was started by a CIA pilot of that name and was and is CIA-financed.

The European base of the Lockheeds also is Rhein-Main. The large CIA planes are involved in Afghanistan operations.

The N8183J, like the N8213G, was investigated by a European government but got a pass because it is a cargo plane. Two Austrian Draken fighter planes intercepted N8183J intruding into Austrian airspace on Jan. 21, 2003. The Drakens normally would have forced the plane to land, but they only intercepted it. The Austrian foreign ministry considered the aircraft as civilian (Is the CIA civilian?) and saw no reason to authorize the ministry of defense to force the plane to land. After all, it was a cargo plane (see photo).

Presidential and AWS are owned by the mercenary firm Blackwater USA. They operate out of the Melbourne International Airport in central Florida. They are run by the former owners, Richard Pere and Tim Childrey.

The companies fly Spanish CASA C-212 wide-body passenger/cargo aircraft. These carry paratroops and oversized cargo and can operate from short and unimproved runways.

In Europe, Malta is the base for these planes and the ATRs in the list, both of which operate in Afghanistan.

At the company's airstrip near Green Cove Springs, FL, in the Reynolds Industrial Park, at a former naval base, you are apt to see many of the planes in the list. Few if any other companies would have the security clearances to work on the CIA's electronics.

FOR PHOTOS OF OUTRAGES:

FOR PHOTOS (AND DETAILS) OF PLANES: