Examination of the government's continued press ahead with it's universally discredited ID Cards Bill, particularly in light of the "Legislative and Regulatory Reform Bill", which seeks to give ministers the power to amend acts of Parliament without calling a vote. 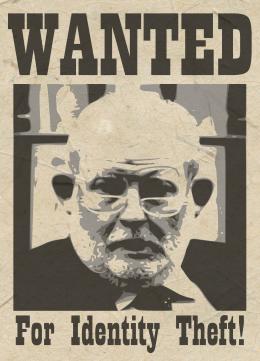 If the letter pages of various local newspapers are anything to go by, there is increasing concern among members of the public about the government's proposed ID Cards Bill. People appear to be well aware that a lot of our money is going to be wasted on a gargantuan technological nightmare that the government seem rather desperate to bring in.

Unfortunately, it seems the mainstream public are missing a few zeros on their idea of the cost of this system. It's not going to cost millions - it's going to cost BILLIONS! Somewhere between 12-18 billion pounds, according to the London School of Economics report, which Labour continue to ignore as it disagrees with their spin.

Some people seem to be OK with the idea of the system "as long as the government pays for it", but there's no such thing as "government money" - these billions come from our own pockets, at a time when we're already being told that we can't afford pensions, free university education, housing and all manner of other things.

Others seem to be confused over what all the fuss is about - having fully swallowed the government's extravagant claims that ID cards will do everything from ensuring we get access to benefits and healthcare (that we're already entitled to), to stopping illegal immigrants (the default scapegoat), to somehow magically wiping out terrorism (don't mention foreign poli... LOOK, A BALLOON!)

Yet, far from being stupid enough to believe that terrorism can be fought with ID cards, the government (including Charles Clarke himself) has already admitted multiple times that ID will do nothing to stop terrorism. Still, they're happy to continue to maintain the illusion that it might, despite any such claims being publically rubbished by Dame Stella Rimington, the ex-chief of MI5.

The government have utterly failed to make a case on any of the grounds they claim we "need" ID cards on - and this bill is barely even about cards! The cards are just a distraction from the most insidious part of the legislation - the National Identity Register (NIR) database.

As many computer industry experts have pointed out, the NIR will make our personal information much less safe, and will actually facilitate identity theft, not prevent it! We'll have no idea who is looking at our information or what they're doing with it - the database completely removes our ability to watch out for ourselves and control who has what information about us.

Not only that, but due to the existence of each person's unique identity number, it will be trivial to link together previously unrelated data about us from all manner of other insecure databases, thus allowing would-be identity thieves to easily build up profiles of potential victims. This "meta database" of linked up information (both directly through computer networks and indirectly using just the common identifier number) is the real threat behind the bill, and the reason most of us who work in the computer industry, including leading security experts, are resolutely against it.

Every single one of the government's claimed "benefits" of ID have been repeatedly and publically demolished - ID will make no difference at all, other than wasting a colossal amount of our money, and making the public accountable to control-freak civil servants.

Only recently, a delusional Tony Blair said "I think we've won the argument on [ID cards]" - who is he kidding? All of Labour's cases for ID have been absolutely rubbished, debunked and exposed for the spin they are by a growing number of highly regarded industry experts and academics, yet every time this happens, the government just change tack, rather than refusing to acknowledge their case is fatally flawed.

If the argument on ID cards has been won by the government, why is it that on a mini survey on the BBC News website, 75% of over 31,000 respondants do not believe that ID cards would make the UK any safer? The more people find out about this bill, the more unpopular it becomes. Popularity continues to fall exponentially, yet Blair claims "victory" and pushes on regardless!

The argument has barely even started, because the government will not engage the public in debate. If the case for ID is so compelling, they wouldn't be grasping at straws and refusing serious debate in their desperate attempts to justify it. They wouldn't already have spent £32 million preparing for ID cards before they have even become law. Why all the sneaking around? If they have nothing to hide, they have nothing to fear, right?

Opponents of ID cards have been demanding real debate since day one. Give us just a one hour televised debate with MPs, and we will demolish this legislation so thoroughly that there will be absolutely no questions left about who won!

Only last week on BBC Question Time, Peter Hain MP (who could easily be spotted as the only ID supporter present in the entire studio) was heard using Disney and supermarket carpark systems in his desperate attempt to justify this bill, when it is plain for all to see: there is no justification.

Biometrics, ID cards and massive state databases are not "inevitable" as Hain claimed - they're simply being imposed upon us by megalomaniacs, who don't care about our legitimate concerns or spending our money wisely.

The Government says that it accepts the House of Lords concerns about making Identity Registration compulsory, and removed from the Identity Cards Bill the powers to order people to register and to force them to produce ID to access basic services, without first passing new legislation.

However, such new legislation is already before parliament! The Legislative and Regulatory Reform Bill (LRRB), scheduled pass shortly after the Identity Cards Bill, would enable ministers (with very limited safeguards) to modify any act of Parliament by order (including the LRRB itself) without parliamentary process.

Under the guise of "streamlining reform" (by removing checks and balances), Labour's version of Hitler's 1933 "Enabling Act", by which the Nazis obtained dictatorial powers using largely legal means, could well include making ID compulsory without having to hold a further vote on it.

The government is out of control, constantly ignoring the public and seizing more power for itself. Unless the public are resolute in resisting this creeping erosion of our rights, not-too-distant history is going to repeat itself.

Waiting is not enough - we must put a stop to this disaster right now!