Tonight London activists picketed the Israeli Embassy in Kensington in solidarity with a young activist who has been badly and deliberately injured by the Israeli border Police. 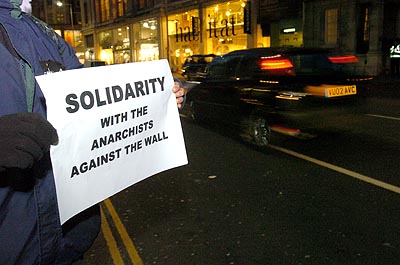 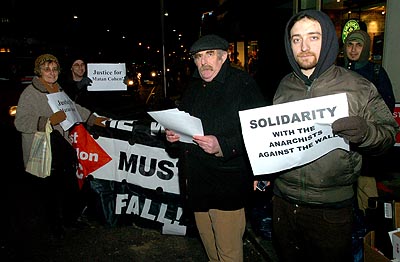 Matan Cohen a 17 year old activist in Anarchists against the Wall was shot in the head by a rubber by border Police on a demonstration against the Apartheid Wall in Beit Sira last Friday. He is still in a critical condition and may lose the sight in one of his eyes.

An eye witness (Maria from Sweden) said : 'We were at least two hundred yards from any stone throwers. It was obvious that were Israelis and internationals and that we were completely peaceful and separate from any demonstation.'

The above comment suggests that observers were deliberately targeted by the border Police.

Many of us met Matan during a speaking tour in the UK last year. He impressed everyone who heard him as an extraordinarily intelligent and thoughtful young man with deep convictions. Yet he was shot twice. Once in the leg and once in the head, despite military guidelines which specify that rubber bullets fired in this way endanger human life.

The other casualties from the repression that weekend included:
Sara Bregal (American International) hit by rubber bullet.
Hussni Rayan who needed sugery after a metal coated rubber bullet lodged near his kidney.
Meanwhile IDF offensives in Nablus and Jericho claimed 7 Palistinian lives which went unreported in the western media.

Just another day in occupied Palistine...

There was a phone interview with him today from his hospital bed on the weekly indymedia radio london show on resonance fm. He has an operation in the next days on his eye, they say a 50/50 chance of saving his sight in it. He told about the incident, many other people were injured as well since they shot at people in very close quarters. It was a peaceful demo, and as they prepared to fire upon them the people were shouting we are peaceful, no violence. I'll try to get a copy of the interview and post it here on IndyMedia.