Pyeongtaek, South Korea - On March 6th, 2006, South Korean military riot police began an attack on the autonomous village of Daechuri. For over four years, Daechuri and the nearby community of Doduri have defiantly resisted the siezure of their homes and fields for the expansion of an United States Army base. Barracaded inside the elementary school, rice farmers, elderly residents, and peace activists are holding out against sporadic, sometimes intense attacks by Korea's elite military police force. International support is needed to pressure the Korean government to halt its brutal assault. 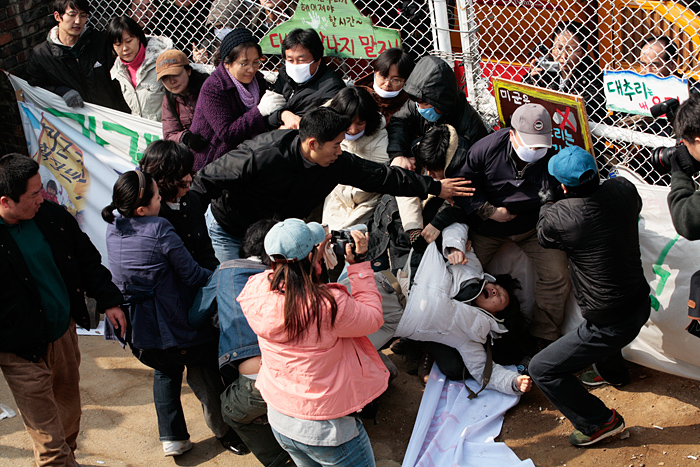 Utilizing tractors as road blocks, human shields chained to the school gates, and the courage of a people fighting for their homes and lives, they have, so far, resisted wave after wave of attacks by hundreds of military riot police. Residents and peace activists have suffered beatings and arrests, while inside the school, activists upload news updates, video of the attacks, and make pleas for immediate aid. They are exhausted and dehydrated, and in need of reinforcements and supplies. International observers, journalists, and anyone with a phone or a computer can take action now.

The expansion of U.S. Army base Camp Humphreys (K-6) is part of the Global Repositioning Plan, first outlined by the Project for a New American Century (PNAC) and later adopted as the Bush Administration's strategy for consolidating its military hegemony over Northeast Asia.

Opposition to the expansion of the base has come from many diverse currents within Korean society. Apart from community displacement, many have also highlighted issues including the devastating environmental impact of US bases , the violent crimescommitted by US troops stationed on the peninsula, the issue of human trafficking and forced prostitution which surrounds the bases, and the potential for a new arms race that could destabilize all of Northeast Asia.

Currently, Camp Humphreys occupies 3,734 acres. However, in December 2004 the Korean government pledged to give over an additional 2,851 acres for the base facilities. But this land is flat, rich farm land stretching as far as the horizon. With this new expansion, some 1,372 residents will be driven off their land. Many are elderly people in the 60s and 70s. Fifty years ago these communities lost their land as 2 foreign forces (first Japanese, then American) built and expanded the base. Now for the 3rd time they will experience being forced off their own land. The Korean Ministry of National Defence (MND), has publicly declared that it will make the houses unlivable and the land untillable. If anyone touches an empty house they will be fined. To prevent people from engaging in agriculture the water lines have been cut and barbed wire has been laid.

Residents and Korean peace organizations have been fighting the proposed expansion through legal means since 2001, all the while being deceived and ignored by officials, which finally prompted them to take matters into their own hands. In Feb 2005, Nomads for Peace "Peace Wind" moved into the village and initiated a variety of supportive activities while living with the residents. Last March, NGOs from all over Korea formed a Counter Measures Comittee to join with the residents of Pyongtaek in educational programs, publicity and solidarity actions.

Eventually, weary of the struggle, some villagers accepted the compensation money and left, others were intimidated into fleeing, but many farmers and their families refused to surrender their homes and livelihood to a foreign power's imperial ambitions.

A national campaign formed, including a tractor driven "Peace Pilgrimage", as well as massive solidarity rallies. In November of '05, two Korean farmers died at the hands of riot police in Seoul. In December, 2005, the Land Expropriation Committee approved the "imminent domain" seizure of Daechuri, Doduri and the surrounding fields. The farmers' existence on their own land was now illegal. Outraged and dissillusioned with the corrupt beaurocracy of an indifferent government, in February, farmers marched to Pyeongtaek city hall and burned their "residency cards", renounced their Korean citizenship and declared Daechuri an autonomous region.

Within this rebel territory, a vibrant community has flourished. Artists, musicians, peace activists, and religious leaders have joined with the residents, repairing and occupying vacant houses, and creating a "Peace Village". Murals of hope and resistance have appeared on blank walls, flags and banners opposing the American base expansion and U.S. imperialsim hang throughout the town. Traditional, shamanistic "totem poles" were carved in order to chase out the evil spirits plaguing the farmers. Every day, for over 550 days, residents and visitors have gathered in the Peace Village for a candlelight vigil. Famous Korean entertainers have made appearances and popular musicians held concerts to highlight the cause and encourage the farmers to continue fighting. Faced with the greatest tragedy of their lives, the villagers and their supporters have created a community of inspirational beauty and power.

These peaceful farming communities are now being uprooted and brutalized due to American military expansion. Attacks against the village by Korean authorities will continue until the U.S. withdraws its proposal for base expansion. Only massive international solidarity can save this land. 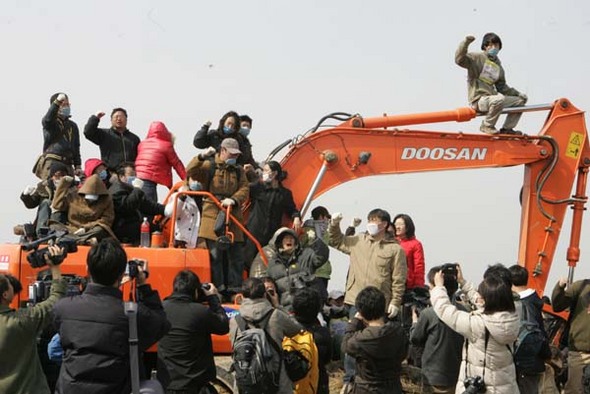 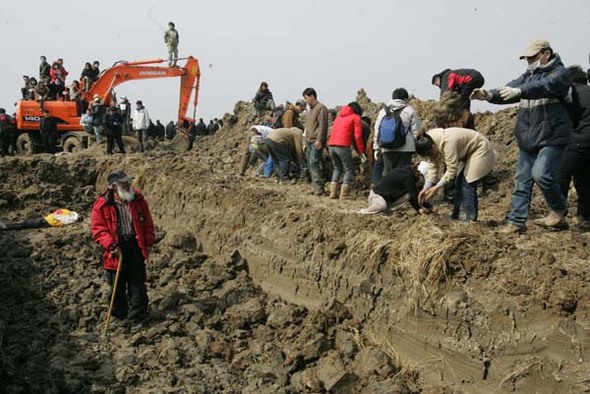 9:30am, March 15. Two backhoes begin gutting the rice paddies on the far side of the fields. Nearly one thousand riot police stand attentive at the edge of the field, armed with batons and shields. Thousands more are posted around the periphery of the village. An untold number wait at adjacent Camp Humphreys Army base, while hundreds monitor street intersections and key access points to the area, preventing any tractors or farming equipment to arrive for the March 17 spring cultivation. As the supporters realize that the destruction has already begun, they race down the long narrow concrete path that divides the vast fields. It snowed the past few days, and the paddies ar thick with mud. Protestors immediately surround the machines, who halt their excavating so as not to crush anyone. Someone climbs on top of the giant arm and secures himself to it. Elderly women lie down in front of the massive treads while people attempt to get inside the cab of the backhoe. The crowd of people split in two to confront each machine. The riot police stand at the edge of the fields, motionless, awaiting orders. There is a scuffle between an agitator and a protestor, and they tumble into the eight foot pit carved from formerly fertile soil. Video and still cameras point in all directions, daring the police or plain-clothed thugs to commit an atrocity under the gaze of the "media." Unable to continue the digging, the machines stand idle as people surrounding them are shouting and crying. The residents of Daechuri have feared this moment for years, the day their land would be transformed into dead earth, a mere platform for the U.S. military to expand its operational base and recreational facilities. Suddenly, the backhoes begin moving again, but instead of continuing their excavation the backhoes begin refilling the pits with the dirt that they had just removed. Elation passes through the crowd upon seeimg these workers disobey their orders and follow their hearts. Then the military riot police move into action, marching around the section of the field, cutting off all sides. They occupy two bridges, to prevent any more protestors in the village from joining. For a while there is a stand off. An eighty-year-old woman feignts and is taken to the hospital. The police begin to arrest people. Many protestors resist and are beaten down. Elderly villagers hurl mud at the police. Some people on the edges of the field cut through parts of the fence and set small fires on the army base. The struggle continues for hours, with police surronding the backhoes now covered with activists, with neither side gaining or losing much ground. Before nightfall, the police backed off, the day had been won, the fields still exist. Overall, 40 people are arrested. Many are injured, with broken wrists and ankles. At least two are still hospitalized in serious condition. Injured, exhausted, and running low on supplies and reinforcements, the residents of Daechuri and supporters of the Peace Village fear what will come tomorrow. There is word that the police will attack the elementary school again, the headquarters for the Peace Village. They desparately need more people to help defend.