Our baby NET is 2 years old today. Nearly 10million jounrneys were made on NET in the last year alone!!!!! 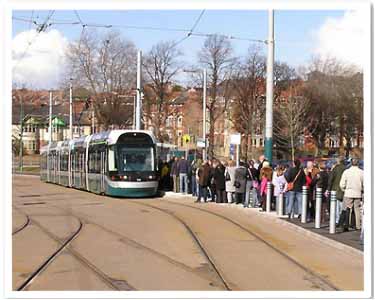 A tram extension to Clifton & Beeston will save millions in future roadworks,clean the trent valleys air which has some of the worst air qaulity in Europe & boost local jobs & the economy with the trams being built in Derby rather than polluting cars mainly from overseas.
Line one has been a massive success, with trams packed & adding a sense of confidence & safety to cities.

The new tram would have the backing of most nottingham electors as well as young people & keep us environmental
terrorists at bay.
Come on, its the only really good thing new labour has actually done for Nottingham, dont let us down, give us the rest of our tram.
£300 million isnt much for a system that can last for hundreds of years
More roadbuilding will cost billions & you are gauranteed to get far more local opposition from all sectors of society