France has been hit with a wave of strikes, marches and university occupations in recent days as workers, students and young people fight a new legal state assault on employment rights 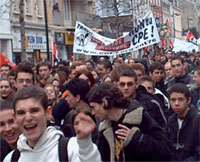 France has been hit with a wave of strikes, marches and university occupations in recent days as workers, students and young people fight a new legal state assault on employment rights, reports Jef Costello for libcom.org news.

The ‘first employment contract’ (Contrat première embauche, or CPE) which was adopted by the senate on the 28th of February removes job security from workers under 26. The French Government has claimed that the only way to reduce chronic youth unemployment is by giving employers the right to sack workers under the age of 26 without notice, compensation or even a reason during the first two years of their employment. This proposal has been widely criticised by students’ unions, trade unions and public opinion. With unemployment amongst under-25s running at 22% many young people feel they have little to lose, even a good degree is no guarantee of finding work.

The vote in the Senate on the CPE was brought forward by a week to pre-empt the national day of protest called by students’ unions for the 7th of March. The day of protest went ahead in spite of this, with 400,000 people attending 160 demonstrations according to police estimates. The demonstrations were mixed with trade unionists, students, the unemployed and education workers. Students from the Lycées (roughly equivalent to secondary schools) were well represented at demonstrations. There have been occupations and strikes country wide, mainly focussed around universities. Roughly half of France’s universities have been occupied, Rennes II university has been blockaded by anti-CPE protesters and strikers since early February. On Tuesday 7th the Sorbonne in Paris, a key site in May 1968, which has not been the site of an occupation since was occupied by students