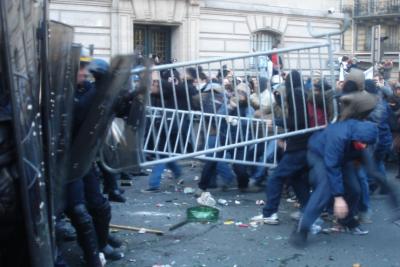 Today was the students day of action. We’ve been giving updates as and when we recieve them, but this remains just a sample of what has happened across France today:

Mobilization of anti-cpe high-schools in Arras [from indymedia lille]:
The high schools in Arras (Robespierre, Molet, Carnot) are blocked tonight. This evening a rumour of a prefectoral decree allowing intervention of the police force circulated. A rumour only no doubt.

Youths rioted against CRS this evening in Paris as the riot police blocked students approaching the Sorbonne. Photos here and here.

A University ampitheatre, packed with well over 700 students has voted to stirke and to blockade the Tréfilerie site of the University of St. Etienne. This has already forced the abandonement of a proposed open day tomorrow. At the Métare site a blockade was also agreed and students will continue to meet daily as long as the struggle continues.

First pictures of todays riot near the Sorbonne.

Photos from Marseille where 2500 schoolkids marched this afternoon.

Since six o’clock, between 2000 and 3000 youths have been blockading Nantes train station, where all university buildings but the School for Medicine are blocked.

Students have clashed with riot police in Paris late this afternoon. Youth hurled bottles and missiles at CRS in the vicinity of Sorbonne University. We hope to bring more news on this as and when we get it.

According to Le Monde, this morning at 8.30am French time some 5000 youth marched through Limoges, passing all major educational establishments and picking up demonstrators as it went. It appears that anger is strongest outside Paris.

In Lille nearly 10,000 are marching. They tried to gain access to the train station, but were driven back by riot police. 1 arrest. Now moving towards police HQ. At Lille3 University, a vote takes place to decide on whether to continue the blockade of the campus. The result: 2108 vote in favour of continuing, 972 against. Lille2 vote to continue blockade in a secret ballot 1127 in favour 705 against. Lille1 to continue strike with blockades and support for the demonstrations of the 14th, 16th and 18th.

Sixty-three out of the country’s 84 universities are on strike, according to Unef (students union). About 50 of them were occupied by students, the union said.

Chirac has come out to back CPE, and support Villepin.

French President Jacques Chirac offered “total and unreserved” support on Tuesday to his embattled prime minister. The contract was “an important element” in the fight against youth unemployment. “It goes without saying that I totally and unreservedly support the activities conducted by the prime minister and the French government,” Chirac added.

It now appears that many, many high schools up and down France have chosen to go on strike today. They have come out in force for the first time since last weeks million strong demonstrations.

The latest from our man on the ground in Paris:

Well, its all going off in Paris today! The whole city is swarming with revolting schoolkids and revolting students.

Villepin you are fucked.

All the kids are on the street
( Sounds like an old punk song! )

Liberation’s front cover is FAC OFF!!!!! 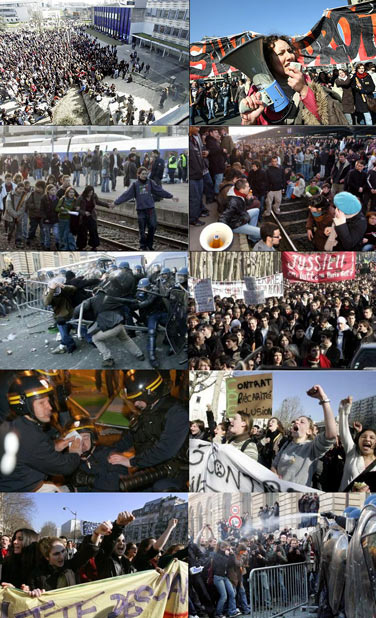