Thursday 16th March Update:
Well over 250,000 students in France took to the streets in protests against the CPE around the country. That's the official estimate, groups involved put the numbers much higher (300,000 according to the student union UNEF, 500,000 according to FIDL’S, and even 600,000 according to UNL’S). 70% of universities effected by occupations and protests, schools also occupied in many places. More roads blockaded, town hall occupied in Rennes, reports of fascists attacking student protestors in several locations, heavy clashes in central Paris and at Sevres and near Sorbonne area this evening with tear gas, rubber bullets and water cannon used as people fought riot police from 7.30pm, CNT union members arrested, reports of up to 300 total arrests today... 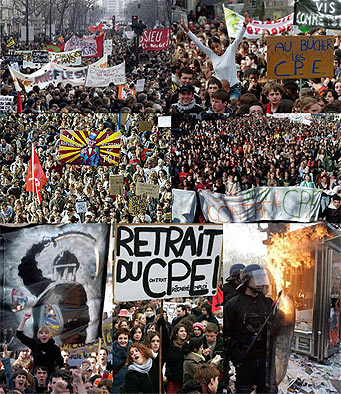 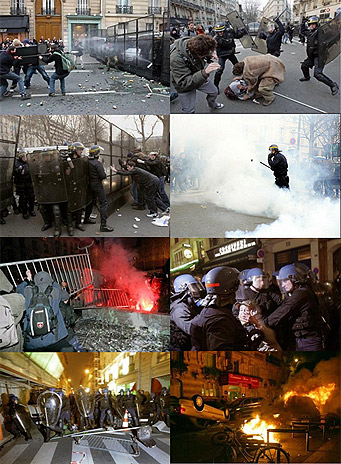 Many of the protesters arrested arbitrarily today will be in court on March 24th at 9am. A demonstration has been called. State repression and fascist attacks are stiffening the resolve of protesters, there have been calls for better movement on the ground to prevent the police, especially the paramilitary CRS, and fascists attacking small peaceful groups of protesters. Hundreds of thousands of people have taken to the streets, day after day, a few hundred fascists and a hated police force won’t be able to hold back the anger of the people.

According to a survey by the CSA polling company set to appear in tomorrows Parisien, 68% of the French are now in favour of withdrawing the CPE, that is to say 13 points more than on March 8.

Most reports speak of 150 arrests last night and 35 police injured.

Rail services were disrupted by protests and blockades in many places around the country - Guardian reports that rail authorities say this happened in a dozen towns. Reports also of clashes in Nancy and other towns.

There's bigger protests scheduled this weekend, so watch out for news on Saturday.