One mobilization from just one of the occupied Universities. 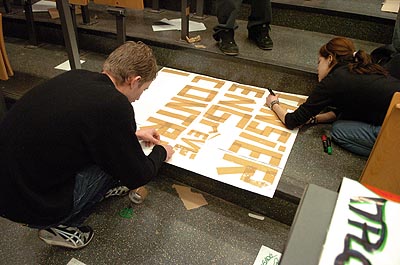 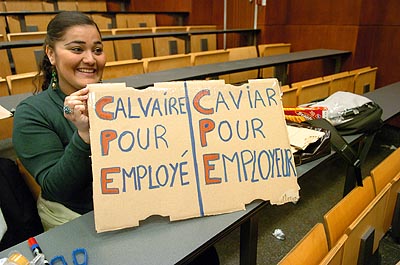 ...for the main demo 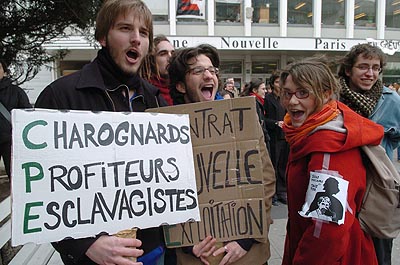 Gathering for the march. 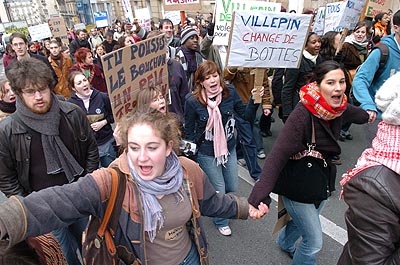 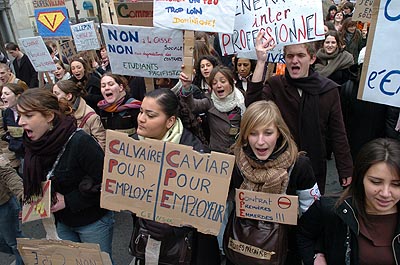 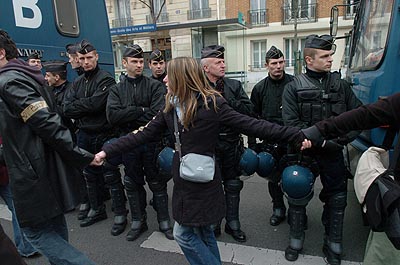 Censier University is at the hub of the resistance in Paris. The students have been in occupation for several weeks and show no sign of backing down. Walking in you see a map of all the occupations in France. Out of 82 universitys 63 are now occupied.

The Censier campaign has also absorbed the students and activists from Sorbonne University whose occupation was brutally broken up by riot cops with gas and batons a few days earlier. The attack on Sorbonne was no accident. In 1968 during the student uprising Sorbonne was at the centre of the struggle. The attack on it was symbolic of the government’s determination to crush the protest.

Aside from the work of building the protests the students have also been engaging the local community. Debates and discussions about neo-liberalism have been organized with local groups over the last few days.

The march from the Uni to the main demo is loud, Police free and attended by nearly a thousand determined students and their supporters. The stewards link arms as the march passes by squads of CRS riot cops mobilized for the main event. The march reaches the main demo after about half an hour. Each Uni and college in the area has staged its own feeder march to the demo, which is huge.

A student from Censier reports on the occupation and strike there which has been going for two weeks, including efforts made to spread the struggle to workers and academic staff at Censier, and outside the university.

Inside the occupation movement: ‘Together we are recreating our university’

We’ve been on strike at Censier for a good two weeks now and we’re entering the third week. The whole university agrees with the strike, including teachers, admin staff and other workers – it’s just the president of the university who opposes it.

This means there’s no need for us to sleep in the building overnight – it’s an occupation without an occupation! Instead we run picket lines and a series of events at the university site from 7am to 9pm each day.

We’ve made a real effort to reach out to all the workers in the university. For instance, the cleaners here strongly agree with what we’re doing and we’ve invited them to speak at our general assemblies.

Many of them work two jobs to make ends meet, so they are spreading news about the occupation to other workplaces such as the airports.

Every day we hold a general assembly that makes the big decisions, but for specific tasks we’re organised into various commissions. I’m part of a commission that organises debates and weekly concerts at the university. Next week we’re hosting a debate on May 1968 with the Marxist philosopher Daniel Bensaid.

Another commission deals with the press – we’ve been profiled in L’Humanité, Libération and on the front cover of Time magazine. Another organises the picket lines.

Together we are recreating our university – people have organised themselves and everyone knows what they have to do.

The picket lines have been very important in explaining the occupation to students and building support for it. We now get around 800 students turning up to our general assemblies.

We’ve also made strong links with the teaching staff. They came to our general assembly to tell us they agreed with the strike and picket, and that we would learn more from the experience of organising an occupation than we would sitting in lectures!

This movement is really growing. There are 82 universities in France and 60 have joined the national coordination committee against the CPE youth employment laws.

Some 45 of them are involved in strike action and 25 are completely occupied. There’s a real determination among students to win.

We’re now building for the joint demonstration called by youth organisations and trade unions on Saturday. The student national committee has issued a call for strike action on Thursday of next week and we’ll be trying to win support for that.

We are also creating links with the wider movement against neo-liberalism in France.

The other key strategy is to build support for the anti-CPE movement among lycée (high school) students.

We’re sending delegates to lycées to try and get them out onto the streets. This movement began in the lycées and in the suburbs. If it grows, we will win.