It is impossible to give a number for the demo. There was no helicopter available to IMC UK. Tens of thousands marched against the CPE legislation possibly up to 100,000. The demo was loud and peaceful with few stewards and not a cop in sight. Several sound systems entertained the thousands over a route of several miles. 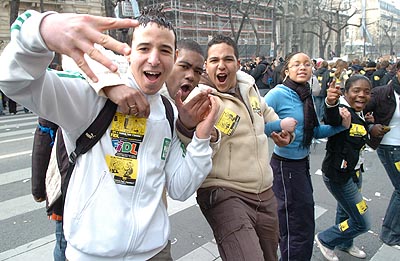 The kids are allright. 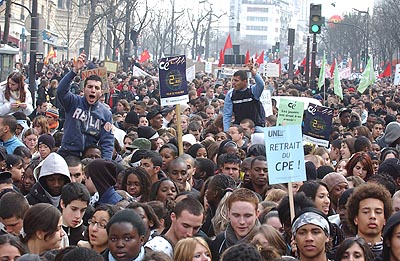 Especially when this many mobilise... 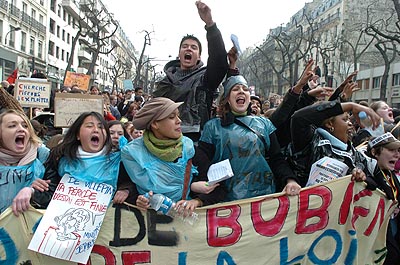 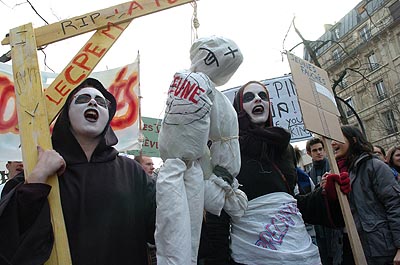 ...about the death of employment rights. 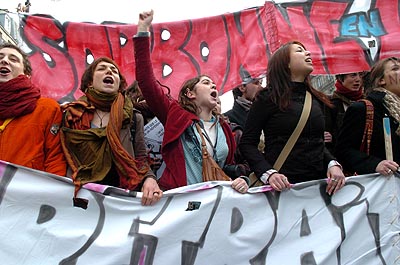 Although led by the student movement the the protest attracted everyone across the French social landscape. In a nutshell the CPE reforms mean that anyone under the age of 26 will face a future where their rights as an employee will be removed. For the first 3 years of doing a job bosses will be able to sack their staff without reason at no notice. This will of course make victimization of trade unionists easier than ever. It is a blatent attempt to impose a precarious neoliberal agenda on French workers. This French bosses think will make them competitive with the like of Britain and Japan.

If this demo and the growing movement against this law is anything to go by the government faces a massive fight and humiliating climbdown. This is the latest in a series of massive protest which look set to get even bigger on Saturday. Frances formidable Trade Union movement hits the streets tommorow for what will be the biggest demo to date. Most of the kids I spoke to today said the Saturday was their day too.