Cops Get Tough On Cuddly Toys 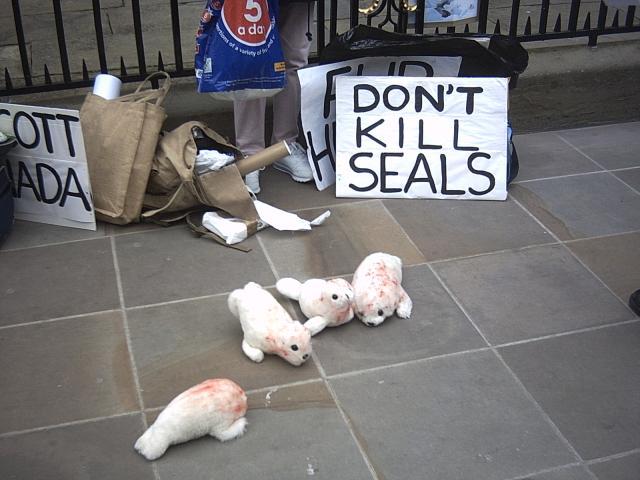 Today, 10 compassionate people took to the streets of Worcester, to voice their disgust at the forthcoming Canadian Seal Cull where up to 300,000 seals will be murdered for their fur pelts.

Nearly 1000 leaflets were handed out to the public, who seemed to be equally as disgusted at the actions of Canada. Signatures were collected on a petition, which will be sent off immediately. 2 protesters dressed as seals drew attention to the demonstration.

4 toy seals narrowly escaped "seizure" under section 5 of the public order act, as "apparently" 2 members of the public had complained they found them distressing, as they had fake blood on them!! JUST THINK HOW DISTRESSED THE REAL SEALS FEEL!! the police seemed to think the visual but peaceful demonstration warranted deploying 7 officers - obviously real crime in Worcester on a Saturday afternoon is at an all time low...!!

A cameraman from the BBC arrived, and of course seconds later, every single officer in the area scarpered. The cameraman was equally as amused, as we all were to hear the Toy Seals had distressed 2 people!!!! The dreadful over-policing didn't spoil the day one bit. The message was given out loud and clear to the public and information given out on ways they can help to put pressure on the Canadian government.

... for all the seals who will be killed over the coming weeks... we tried for you & will keep fighting until the Clubbing to death and shooting of seals is BANNED once and for all.

A Big thank you to all who came along.

The story was picked up by the local paper, the Worcester Evening News with the headline COPS GET TOUGH ON CUDDLY TOYS

The article begins by saying that bemused animal rights campaigners were told by police that they must end their protest because their cuddly toys were offending passers-by. The story got across the reason for the demonstration, "to highlight the annual Canadian seal cull".

The paper reports that the group of eight protester were ordered to move away by the police using Section 14 of the Public Order Act and point out that the incident follows the Herefordshire police being ridiculed three weeks ago for seizing three gollywog dolls in Bromyard.

Quoting Lynn Sawyer one of the protesters, readers learned that when the protest began at 12.30pm, the protesters were told by police that they were causing a disturbance and at first threatened to arrest them under Section 5 of the Public Order Act.

"We had these fluffy toy seals and the officers then quoted section 14 of the Act, saying it could get out of hand and told us to move within
an hour. We weren't getting out of hand and I can't see how a toy seal would be offensive to anyone. I find it scary you can't have a very fluffy demonstration without being told to move.", says another quote attributed to Lynn.

"Beautiful seals are being killed en masse and we wanted to show how we felt about it. It was handled badly and I'm going to make a formal complaint to West Mercia Police.", she said.

In a statement to the paper the South Worcestershire Police spokesman said that the order was issued to prevent disorder, or distress or disruption to passers-by.

"These orders are used where the senior officer policing any event or
incident considers that it could give rise to serious disorder, disruption to the community, or intimidation, or could cause harassment or distress.", he said, making the police sound even more stupid.

According to the paper, the Section 14 Order was issued at 2pm and the demonstration ended at 3pm. The reporter spoke to Anna Walton, the manager of a nearby lingerie shop who apparently said, "I didn't notice
anything that was out of hand."

Susannah Mewsome who works in Peplow jewellers told the paper, "We couldn't see what was going on because the Guildhall is just down from us, but we were told of the demonstration." .

It is not clear why the paper bothered to include this womens views since she was clearly not a witness to anything but never-the-less the paper quotes her as saying, "I can see why the police moved them away because sometimes people demonstrate around here and it can intimidate customers."

Typical formulaic binary reporting really but thanks to the cops making a fool of themselves the incident provided publicity of the issues to many more people beyond those who would have seen the demonstration. The article finished by reporting that last year's seal cull resulted in
the deaths of 317,672 seals.