On the day after half a million people attended the St. Patricks Day parade, a couple of thousand more took to the streets of Dublin as part of a global day of protest against George W. Bush and the U.S. ruling elite’s campaign of world dominance and terror. 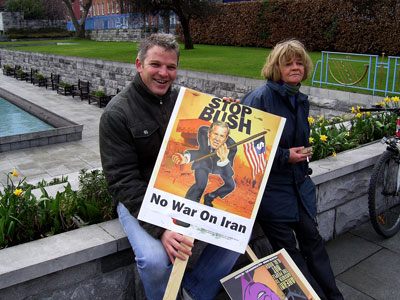 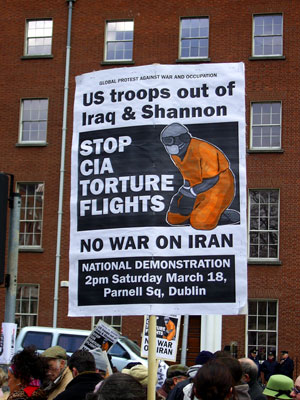 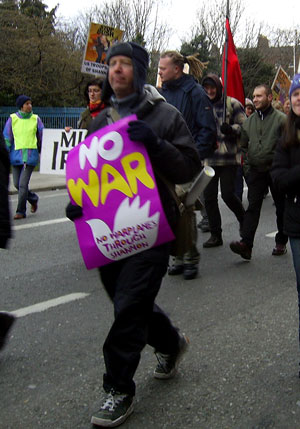 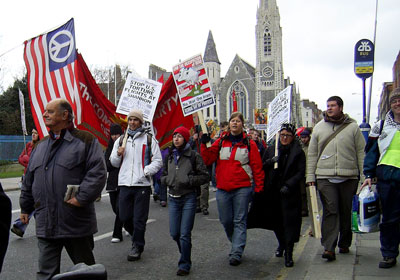 On this very cold spring day we assembled at 2pm, near Parnell Square Memorial Gardens, and set out on a winding march through the heart of bustling Dublin. Many people wore a Black Shamrock to symbolise the mourning of all those who have died as a result of Irish collaboration in the Iraq and Afghanistan wars. We crossed over the Liffey, past Trinity College and on to the statue of Molly Malone, where an old man merrily played his boran as we passed by.

Back over the Liffey we re-assembled on O’Connell Street to hear speakers from the Irish Anti-War Movement, SWP, ATGWU, The Green Party, Sinn Fein and others who all carried the same message: STOP BUSH, END THE IRAQ OCCUPATON, NO WAR ON IRAN and US MILITARY OUT OF SHANNON. We were then treated to a couple of excellent live bands who reiterated this message.