Women from the Ivory Coast living in London marched on Saturday 25 March, 2006, calling on the UK to support the president, Laurent Gbagbo and protest against the French manipulation of the international community and support of the armed rebels. 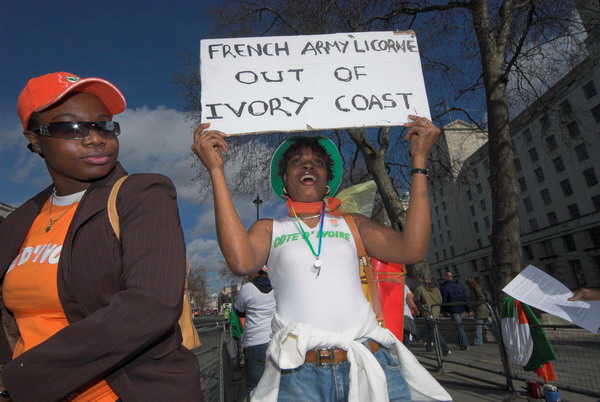 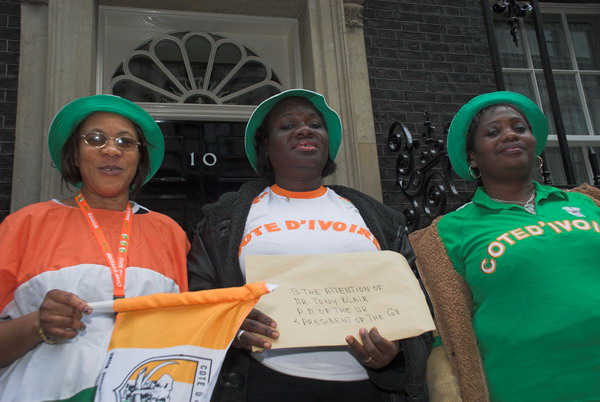 There was much singing and dancing as Ivorian women gathered in the pen opposite Downing Street for the start of their march, and the sun shone on us.

The Cote d'Ivoire (Ivory Coast) was a French colony until independence in 1960, and France still likes to pull the strings. After the rigged elections of 2000, popular protest brought Laurent Gbagbo into power, and he refuses to dance to their commands. So the French supported a failed coup and still support the armed rebel forces who have pulled out of a peace agreement and now occupy the northern regions. There is a considerable French force still in the country - and in November 2004 they killed over 60 unarmed demonstrators.

As well as wanting French forces to leave, the women are also calling for an immediate disarmament of the rebels, and the re-unification of their country with new presidential and general elections in October 2006.

As the only photographer present I went with the three women who handed in their petition to No 10 Downing Street, photographing them outside the famous door, then photographed the march as it set off around the west end of London.

The UK probably doesn't have a great deal of influence over French actions, but it is important that our government don't let them pull the wool over the eyes of the international community.

There seemed to be absolutely no media interest in this event and I was the only person covering it.