Tuesday 28th March 2006 saw over a million workers take part in the largest one day strike in Britain since the general strike of 1926. Every town, borough and city in the country saw workers set up multiple picket lines to defend their pension rights. This attack on pension rights is part of the global neo-liberal attack on welfare, employment rights and the environment that is provoking a wave of global resistance. On the same day just across the channel in France millions of workers were also on the streets and on strike.

This massive one-day show of strength comes after decades of defeat for the trade union movement in Britain, but on 28th March over a million trades unionists stood together and caught a glimpse of their potential power to change the world. 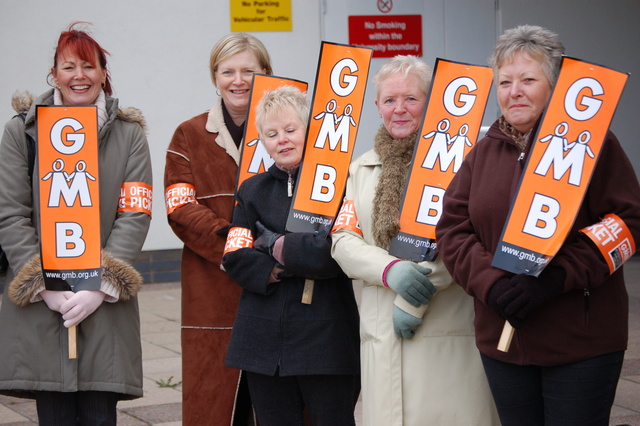 700,000 of the strikers were women workers, making this also the largest ever women's strike in British history. Thousands of schools were shut by the action, along with leisure centres, town halls, refuse collections and many other local services. The strike had many other dramatic effects, with striking workers shutting down all Mersey road tunnels and ferry crossings, along with the Tyne road tunnel, the Humber Bridge and Thames barrier. In Scotland the strikers made both the Forth and Tay Road Bridges toll-free for the day! Other transport operations shut by the strike included the Tyne and Wear Metro, bus services in several major cities, all bus and rail services in Northern Ireland and the Bradford and Leeds Airport.

After picketing in the morning, thousands of striking workers then joined marches and rallies in town and city centres. According to Unison more than 850 people attend a march and rally in the centre of Nottingham, with similar well-attended protests reported in Sheffield, Birmingham, Glasgow, Edinburgh, Liverpool and London. Hundreds of other local rallies were held outside town halls everywhere.

Twelve unions are involved in the dispute including UNISON, the GMB and the TGWU. Following changes over the last couple of decades including the contracting out of council services and the spinning off of Universities (Polytechnics at the time) workers in the Local Government Pension Scheme (LGPS) are not confined to Local Government. The proposal that sparked the dispute came from the Office of the Deputy Prime Minister and it calls for: "the removal of the early retirement mechanism known as the Rule of 85 from October 2006 and the introduction of some new flexibilities to the scheme allowed under the new tax law which comes into force from April 2006". Rule 85 allows workers with enough service to retire at 60.

Last year civil servants, health workers and teachers threatened strike action over similar attacks on their pensions but a deal was negotiated a deal with the union leaderships which, while protecting the pensions provisions of existing workers, unfortunately also allowed the bosses to start new workers on worse terms and conditions. However, at the moment, the government is denying this deal to those under the local government scheme. The local government union leaders want to make a similar deal to that negotiated for other public sector workers. There is debate amongst union members about this strategy, with some activists arguing that a real and lasting victory should also include protecting the pensions of future workers. Millions of workers in the private sector also face attacks on their pensions, as well as a general government assault on the state pension in the future.

This day will have inspired many to feel that it is possible to win a better deal for ordinary people's lives by taking mass direct action. 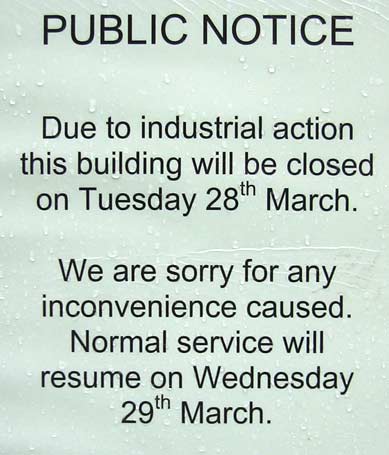 Well unless you've had your head stuck in the sand, yesterday was one big show of force both here in the UK and in France as millions protested over workers rights... both the Eiffel Tower and the Tower of London were closed by strikes... and people took to the streets...

Not so surprising in france however, where the student-led uprising against the CPE employment contract has seen people taking to the streets almost daily for the last month. Another week - another huge protest throughout the country - another riot...

Here in the UK trade unions claimed that well over one million local government workers took part in a nationwide one day strike, protesting against proposed changes to local authority pensions.

The government is changing the local government pension scheme for the worse, forcing people to work longer or receive a smaller pension. Previously the government ruled that members of the uniformed police, armed forces, NHS, civil service and teachers' pension schemes should be able to retire at 60 and have their pensions benefits protected. But for other workers the changes mean they will have to work until they are 65, or face a loss of 30% of their income.

The trade union UNISON says that contrary to newspaper propaganda, local government workers don't retire on "fat cat" pensions. Women, who make up three quarters of the pension scheme members, get an average pension of just £31 a week - and for many, pensions fall below benefit levels.

The one day strike yesterday saw thousands of schools closed, as well as libraries and council offices. Other services like rubbish collection were widely disrupted and transport was hit too, with many local services disrupted including tunnels such as the merseyside tunnel.

The strike was the biggest for years but the Local Government Association said that the numbers involved were exaggerated. Newspapers like the Daily Mail condemned the strikes, though in short they condemn everyone it seems - the government for stuffing up pensions - people for protesting to save their pensions - crazy.

The unions however intend to continue, with more strike action now being planned.