'Blue Peter' are in the news for banning the holders of Blue Peter badges from reduced rate tourist attractions since the badges started going on sale on Ebay.

http://www.theregister.co.uk/2006/03/29/blue_peter_badge_suspended
A moral stance against capitalist exploitation ? If that was true why do they hide their footage of Thatcher endorsing genocide ?
I know this article isn't really news - it also isn't available anywhere else even when it was news, and it is still relevant. Besides, I'd hate for the Socialist Worker to have better information than IM.
The name of the first SAS soldier ever to break ranks and approach the press with criticism of his orders is unrecorded by the internet as far as I can see. He complained about being sent to 'train' Khmer Rouge in how to stick pencils through schoolchildrens ears to scare them from attending school. He thought that was unbecoming of his regiment and if I could find out who that soldier was I would thank him for his dissent which he doubtless suffered for.

The genocide in Cambodia / Kampuchea shocked the world at the time. It was directly caused by the earlier US carpet bombing of the country, but since the actual perpetrators weren't Western agents at the time the genocide was widely reported and universally abhorred. Eventually neighboring Vietnam invaded on humanitarian grounds to relieve the genocide, and at that point the US started supporting the genocidal Khmer Rouge. Due to domestic political reasons they couldn't provide much direct aid to Pol Pot, so they asked the British to help out instead. The British and Australian SAS then proceeded to train the Khmer Rouge in terror tactics that kept the country a killing zone for at least another decade.

My own personal moment of enlightenment - the point at which I became an angry anarchist - came about as a child when watching Blue Peter. The kids TV programme had had an appeal on behalf of Cambodia, and had had a few programmes on the horrors that had recently unfolded there. Anyway, they had raised some money by collecting bottletops - an arcane form of fundraising - and had invited the British PM, Thatcher, on to the show to be interviewed by one of the presenters - Simon Groom. To his horror and utter bemusement Thatcher then proceeded to defend the Khmer Rouge on national kids TV. She pointed out that while they may be genocidal war-criminals , at least they weren't communists, and insisted they should be represented in government there. Nobody knew at the time that at that point she was already providing military aid and training to them, but it was obvious from her damaged and damaging rhetoric. That footage has never been repeated for it exposes our PM as as nasty a villain as any in fiction or myth. To his credit, Simon Grooms jaw hit the floor.

Now, thanks to another disgusted former SAS soldier, we know Ossama Bin Laden was trained in Scotland to fight the communists, I for one am less shocked by that than Thatchers Blue Peter defence of genocide. And yet the BBC are remarkably reluctant to re-air the Blue Peter footage of Thatcher defending Pol Pot. If any of you can work the Freedom of Information Act then that would be my personal reccomendation any 'top 100 tv moments for anarchists' type of show.

No one living has the right to forgive these genocidal murderers. All of us have a duty to kill those of them too powerful to be brought to trial. Ta Mok, the surviving Khmer Rouge military chief, known as 'the butcher', that Thatcher supported is still awaiting a war-crimes tribunal. The Khmer Rouge are being punished, but the sponsors of the Khmer Rouge are still feted as 'statemen' by the mainstream press.

Too many Florence Nightingales
Not enough Robin Hoods
Too many halos not enough heroes
Coming up with the goods
So you though you’d like to change the world ?
Decided to stage a jumble sale
For the poor, for the poor

So you thought you’d like to see them healed
Get Blue Peter to stage an appeal
For the poor, for the poor

"Cambodia was never allowed to recover from the trauma inflicted by Richard Nixon, Henry Kissinger and Pol Pot. During the 1980s, with Pol Pot exepelled by the Vietnamese, an American and British-led embargo made reconstruction almost impossible. Instead, a "resistance" was invented by the Americans with the British SAS contracted to train the Khmer Rouge in secret camps in Thailand and Malaysia. In 1990, when the United Nations finally arrived in Cambodia to organise "democracy", it brought corruption on an unprecedented scale, along with Aids and "aid". This was misrepresented as a "triumph" for the "international community". Cambodia today is a victim of this "aid". As in Africa, the "donors" (the west and Japan) have perpetuated the myths of a "basket case": that Cambodians cannot do anything for themselves and that genuine development aid and rapacious capitalism are compatible."

"between 1985 and 1989, the Special Air Service (SAS) ran a series of training camps for Khmer Rouge allies in Thailand close to the Cambodian border and created a 'sabotage battalion' of 250 experts in explosives and ambushes. Intelligence experts in Singapore also ran training courses, Samay said.
To allow Ministers to deny helping the Khmer Rouge, the SAS was ordered to train only soldiers loyal to the ousted Prince Norodom Sihanouk, and the liberal democrat former Prime Minister, Son Sann, who were fighting alongside Pol Pot's Communists. However, Samay said the court would be told the Khmer Rouge benefited substantially from the British operation. 'All these groups were fighting together - but the Khmer Rouge were in charge. They profited from any help to the others. If they had won the war outright, then Pol Pot would have been back in charge,' Samay said. The Khmer Rouge and their allies were fighting against the Vietnamese-backed puppet regime Hanoi had installed after ousting Pol Pot's extremist Communists and exposing the horrors of the killing fields. In a classic piece of Cold War realpolitik, Britain - prompted by the Americans - appears to have given military assistance to the Khmer Rouge-led coalition, despite knowing of Pol Pot's atrocities, in an attempt to limit the power of the Soviet-backed Vietnamese. 'Thatcher, Reagan, Kissinger - they should all be on trial along with Ta Mok,' Samay said last week"

"And why did Margaret Thatcher, the British prime minister of the day, along with US president Ronald Reagan, support mass murderers who were Communists to boot? The answer is simple. The Khmer Rouge was on the right side in the Cold War. In 1978-9 Pol Pot's regime was ended by a Vietnamese invasion. Vietnam was Moscow's closest ally in Asia. So China-then allied to Washington in the Cold War-invaded Vietnam, only to be defeated itself. This was followed by a guerrilla war in Cambodia in which the US, China, and Britain backed the Khmer Rouge against the regime that the Vietnamese had put in place in Phnom Penh. Thatcher-in a rapidly suppressed interview on Blue Peter, of all things-went so far as to try to distinguish between good and bad Khmer Rouge. The West's concern to punish war crimes is highly selective. "

Blue Peter and the Khmer Rouge

The USA are not the only States of Amnesia.
Here more on the above story.

I do not know what went wrong with the display of the link I wanted to mention, but here it is anyway:

oh come on Pol Pot was small time local gangster compared to thatcher, phoney baloney Kissinger and company he never really got started on an international level.
he did make a bit of a name for himself on his home ground but I think he would have worked wonders in europe for the so called proffesional classes. I could think of a long list of lawyers and other scum bags that
could do with a plastic bag over their heads, starting with Jowell, Mills Berlusconi and so on from there .. 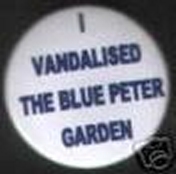 The Register is claiming Blue Peter are thinking of issuing kids ID cards.
I wonder if they'll start taking their DNA from their saliva on envelopes kids send in, and add secret RFID chips to the badges, or if they'll just get the kids to make their own ID cards using sticky-backed plastic...

Blue Peter producers are indeed considering introducing ID Cards for kids.
The corporation felt compelled to act to stop the sale on eBay of the Blue Peter badges that it awards to kids who impress the cameras with charitable gestures or daring feats. So it suspended the privileges they confer on their owners until they could find a way of ensuring only Blue Peter heroes could enjoy them.
Today, a BBC spokesperson said: "We are looking at ways of having a secure system in place. It will be something like some sort of verification or ID, just a secure way of doing it, of proving your identity."

This above article is not news and breaks indymedia's publishing guidelines. The above post should be hidden or removed as indymedia is for recent news not old articles that express an activists opinion of history.

Aimless ramblings written by someone either drunk or forgotten to take their lithium... or both.

And it cites the Socialist(MI5)Worker FFS!

>Aimless ramblings written by someone either drunk or forgotten to take their lithium... or both.
>And it cites the Socialist(MI5)Worker FFS!

And these are the only two references on the internet to Thatchers admission to supporting PolPot on national TV. Millions witnessed it. It was shown nationally. It was a seminal moment for Blue Peter. And yet there is no reference to it anywhere ?

It is the same as if Blue Peter ran a story today on the slaughter in Iraq only for Blair to go on CBBC to claim 'Al Quaeda must be part of a future Iraq government'. Only for the footage to disappear a week later.

Congratulations to the IMCistas for allowing this post to stand, and commiserations to the trolls who demand it be hidden - you wear your paymasters brand on your sleeve.

Oh yes M, 'total animall liberation', criticising everything positive, contributing nothing yourself - if you were only less obvious you would give hypocrites a bad name. As your trolling and pseudo-consenus pseudonymns show, you don't even deserve the yankee dollar you earn.

I'm not saying nothing should be hidden here - just if you let obvious MI5 trolls post spurious negative 'comments' then you shouldn't hide anything ever or else IM acts as a discencetive to what remains of true activism.

Blue Peter showed Thatcher condoning Pol Pot in front of millions of witnesses, and the BBC have footage of this. The various SAS interviews in national interviews proved the other points made. NuLab activists should have no interest in defending Thatchers commitment to the Khmer Rougue - but Mi5 certainly do. So who exactly is complaining about the above post that is prepared to identify themself beyond a pseuodnymn ? Noone.