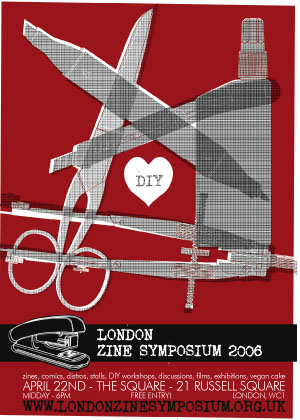 This year's London zine symposium is even bigger and better than 2005's. More distros, more workshops, discussions and events.

If you'd like to help out on the day be it in the cinema, cafe, on the individual zine table etc. then we're having a meeting at the Square social centre at 7pm on Tuesday 11th April.


WORKSHOPS
Radical Bloomsbury – Come with us as we take an hour long stroll round the secret and infamous history that fills up the space around The Square squatted social centre. We will meet suffragettes, Gordon Rioters, squatter activists from 1945, 1970 and 2005, olden days anarchists, radical sandwich delivery men, early feminists, Ranters plus point out the secret tunnels of the area. We wont stray far but we will let history loose. Bring your own tales from your own exploits or stuff you know about. In this way we will share what we have created towards the future..

Feminist health – Radical health open to everyone who's interested

Time to get crafty - Knitting and craftmaking are integral to DIY culture, and this is a good introduction to how it all works.


DISCUSSIONS
Do zines and the internet mix? - Discussion on internet zines, and how the DIY community interacts with the internet, especially as the once non-commercial, non-hierachical space becomes colonised by large multi-national companies such as Rupert Murdoch's recent aquisition of MySpace.

DIY distribution - This is a follow up to a discussion that occured in 2005's Zine Symposium. Rather than a 'how to' as last year's was billed we aim for this to be a look at how we can develope the dream of distributing zines entirely through trades and other DIY channels, whether this is possible, or even desirable.


FILMS
$100 and a T-Shirt – This proved so popular last year it seemed foolish not to show it again. For those who haven't watched it is a cultural analysis of what causes zine makers to tick; what the hell zines are, why people make zines, the origins of zines, the resources and community avaiable for zine makers and the future of zines. Interviews w/ about 70 zine makers, ex-zine makers, and readers from NW USA. Created by Phil Sano, Nikey Robo, and Joe Biel. Music by J Church and Defiance, OH! (83 mins)

Punk:Attitude – Directed by Don Letts, arguably the man who bought reggae and punk so close together, this is an essential retrospective on the early years of punk from New York Dolls, MC5 through to Bad Brains and Fugazi.


EXHIBITIONS
Upon the Illustration of Everyday life - This year's exhibition is to focus on artwork and illustration that has been used within fanzines to illuminate and decorate interviews, articles and reviews. Ranging from band portraits through to esoteric doodles conveying the passion of music. The exhibition will be running from April 20th through to the day of the Zine Symposium on the 22nd April.

CALL OUT FOR SUBMISSIONS – There's still a couple of days left to get artwork to us. The deadline is this Friday. We're asking for artists, or fanzines, to submit between one to five pieces to include in the exhibition which will be displayed in the week before the Zine Symposium and on the day itself. Email

info@londonzinesymposium.org.uk for more info.
Punk Rock Census – Last Hours fanzine is currently running a punk rock census, the results of which will be graphically interpreted and displayed during the exhibition. For more information visit www.lasthours.org.uk/census.php


OTHER STUFF
Mix tape trade box – make a tape with your favourite tracks and trade it for someone else's. You might get something amazing that you had never heard of before or something that you hate but then that's half the fun.
Vegan cake – no need to elaborate!
Cafe – There'll be healthy, vegan food available throughout the day. There will also be tea, coffee available too.


WEBSITE
The 2006 website is now online. It includes all the information you could want about the event, as well as some images and icons to put on your own site to help publicise the event!