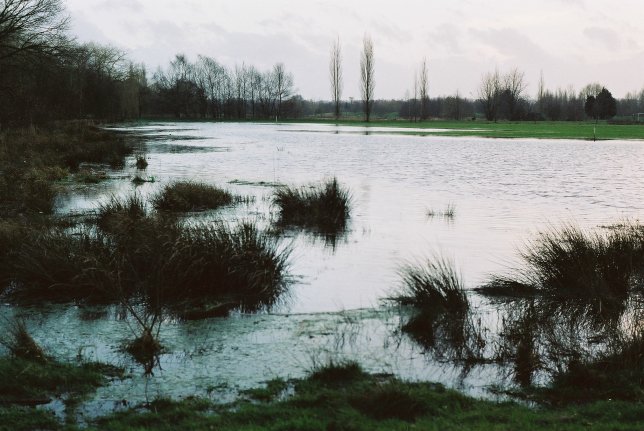 'It is wholly wrong. They should get their priorities right. They should spend the money on the elderly. Who is going to benefit from a golf course? It costs money to play golf. People have to buy clubs, pay for caddies. It's the people with money they are looking after. It's time they took into consideration what the community wants.' -- Peter Sandy

'The whole of that area can be classed as some sort of flood plain but that's an awful lot of money to be spending on a particular golf course. I think one has to have a sense of balance on what the priorities are. I would've liked to have seen the money spent on community initiatives, to support particular initiatives in deprived areas which Aldershot and Farnborough have a number of. I would've liked to have seen that positive use because a much greater variety of people would have been able to get the benefit of any work that took place rather than a select few.' -- Mike Roberts

Cove Brook rises in the nearby hills, flows through Farnborough Airport, through Southwood Golf Course, where it is joined by Marrow Brook and a couple of other small streams, then on through Cove, to reach the River Blackwater at Frimley.

To provide height clearance for the airport, tens of thousands of trees were cut down on the nearby hills, the source of Cove Brook. This increased the rate of run off.

As a consequence the airport was at increased risk of flooding, and extensive drainage works were carried out.

No attempt was made to warn those downstream that their homes were being put at risk, let alone to carry out consultation.

In its wisdom, the Council had turned what was a dedicated flood plain into a golf course. A golf course that is out of action for weeks if not months every year due to flooding.

During periods of high rainfall, Cove Brook is turned into a raging torrent and Southwood Golf Course into a vast lake.

In Guildford, during periods of heavy rainfall, floodgates are opened to allow the the River Wey to flood the surrounding water meadows, protecting the town from flooding.

Rushmoor is intending to do the exact opposite, drain the flood plain and send the flood waters downstream.

No-one these days would install sprinklers on a commercial scale due to the high wastage of water due to evaporation and the knock on problem of salination. A drip-irrigation system would be installed.

The leader of the council Peter Moyle considers this to be a wise investment:

'A stitch in time saves nine – if we don't do it now and we get bad weather and the [golf] course gets flooded we could lose income. It's something the public want and it will pay us back several fold.'

Worldwide there is an acute water shortage - wells are running dry, water tables are falling, lakes are shrinking, rivers are drying up - but Moyle wishes to install a highly inefficient sprinkler-irrigation system, for a golf course.

The southeast of England is suffering from its worst drought in over 30 years, DEFRA has ordered water companies to take effective measures to reduce water consumption, many have put in place hosepipe bans effective from 1 April 2006, but Moyle wishes to install a highly inefficient sprinkler-irrigation system for a golf course and claims it is good use of public resources, something the public want, that will pay us back several fold.

Maybe Moyle is thinking of the property developers he is rumoured to meet on a regular basis.

As leader of the council Moyle has presided over the destruction of Aldershot and Farnborough town centres.

Curitiba, a provincial town in Brazil, turned low-lying land prone to flooding into parks, rivers into linear parks. During periods of heavy rain, the margins of the parks become a little waterlogged, the ducks float a few feet higher.

Aldershot and Farnborough do not meet the UN provisions of parks for a town. Aldershot is particularly poorly endowed. If the plans for the destruction of Farnborough town centre goes ahead, more public and open and green space will be lost.

Apart from a visionary mayor compared with the lackluster leadership of Rushmoor, the main difference between Curitiba and Rushmoor, is that Curitiba involves its citizens in the decision-making process, Rushmoor does not.

We went through this exercise a few years ago. Taxpayers money was wasted dredging Cove Brook. Following public outcry at the environmental damage to Cove Brook and the destruction of its wildlife value, more taxpayers money was spent restoring the brook to its original state.

The Council has two choices: either accept the loss of the Golf Course for part of the year, or turn the area into a park. The latter is the preferred option as it is available to everyone to enjoy, not the privileged few.

Should the leadership of this council continue to waste taxpayers money, fail to protect the value of Council assets, there would be a very strong case for having those councillors responsible surcharged.

Tom Utley, Eco-terrorists are indulging in class warfare by another name, The Telegraph, 7 April 2006