March in Glasgow for the Right to Work

Around 300 asylum seekers, refugees, sans-papiers and their supporters marched across Glasgow this afternoon calling for the Right to Work and an End to Deportations. As part of the international day of action against deportation, they went from the Home Office Reporting Centre in Ibrox to a rally in the Carnival Arts Centre in town. 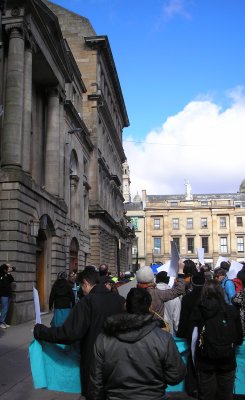 The "Rabble" Arrives Outside Trades Hall 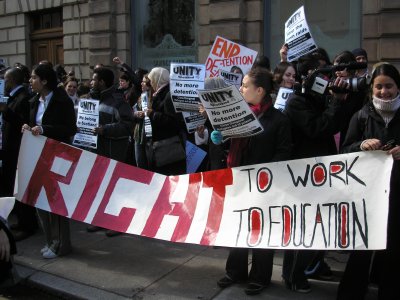 "We don't want income support, we want to work"

Though it was a long way, the rain stayed off and the march appeared to gather momentum and energy as it went along. An international crowd with large numbers of women and children chanting, "We belong to Glasgow", "No Dawn Raids" and "No Borders, no nations, stop deportations". I thought I knew the word "ulululation" before but before passing into Tradeston under the M8, I didn't really. Paisley Road hasn't seen anything like it, judging from the surprise on the face of the smokers outside the pubs.

Once in town, the march paused outside Trades Hall, waiting to enter. Despite the management going back on their late decision to exclude the "rabble," there was no-one there to open the doors on arrival. The police's decision to force a premature start from Brand Street thus backfired on them as people spent 20 minutes on the busy street to getting their message across before deciding to go to the Carnival Arts Centre.

Inside the packed venue there was juice for the kids and speeches from the diverse strands of the march organisation. Representatives of asylum seeker committees in the Red Road, Pollokshaws and elsewhere spoke passionately of the need to stand together so that their voices could be heard. "We don't want income support, we want to work." They thanked the solidarity shown to them by Glasgow people and some even sang the praises of its weather (as diverse as its citizens).

Glasgow has seen marches with more people but this was something more than that. Rather than just walking, this was people finding their voices and the confidence to speak out against the injustice and indignity our immigration system heaps upon them. In Glasgow they are rejecting the isolation and fear imposed by the Home Office and starting to Unite.

http://scotland.indymedia.org/newswire/display/2727/index.php for background on the Trades Hall cancellation.