Korean Farmers Attacked for US Base Expansion

April 7th, 6,000 riot police and 700 hired thugs attacked the
Autonomous Peace Village of Daechuri. They succeeded in destroying the irrigation system, making farming a near impossibility. 40 protesters were arrested, 30 were injured, 5 of those seriously. 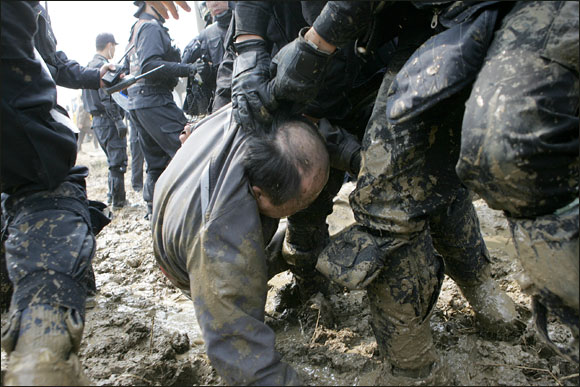 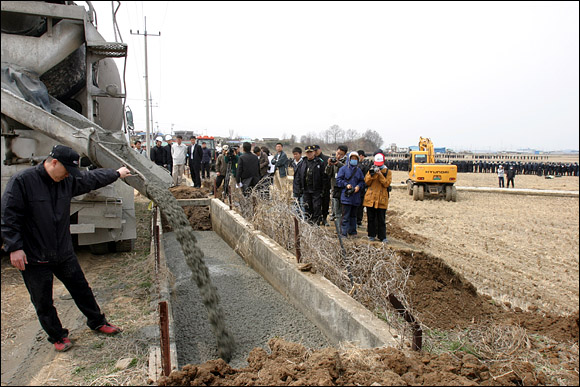 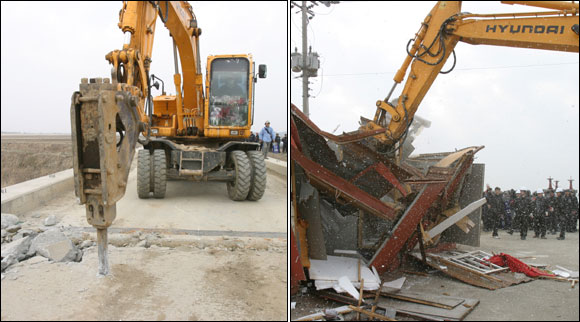 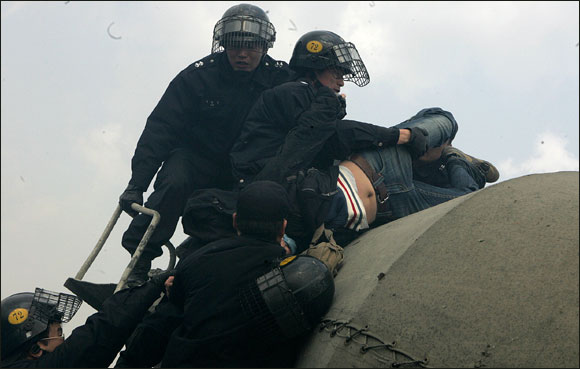 Pyeongtaek, South Korea - The Autonomous Peace Village of Daechuri
has been resisting the expansion of U.S. Army base Camp Humphreys for over
three years. Within the past month, they have been attacked three times. This attack was the most devastating thus far.

The attack lasted from 9 in the morning to 5 in the afternoon. They invaded the village from four different directions, targetting distant areas within the vast farmland, spreading the 100 villagers, human rights activists, and supporters dangerously thin. The riot police escorted backhoes, bulldozers, and cement trucks.

The main target of their attack was the irrigation system whose
gates had been opened the day before during an annual agricultural ceremony. While plain-clothed mercenaries brutally attacked the protestors, fertile dirt from the rice fields was scooped out and used to fill the water canals.
Cement was also poured into the canals. Though the protestors and villagers were spread throughout the farmland, two backhoes were halted. One bulldozer operator claimed that he was getting $450 to carry out the destruction. He was unable to continue after paint was splattered on his windshield.


The plain-clothed thugs, likely hired to deflect accountabilty of
atrocities away from government forces, were the first to attack, while the police observed and defended the equipment. Later in the afternoon the police joined in the melee. Some of the thugs, private contracted martial-artists, were as young as 16 years-old. Paid $65 for the day, many of them were unaware that they would be aiding in the eviction of elderly farmers, and expressed regret at their involvement.

One union worker supporter was hospitalized with a broken back. Another protester lost consciousness due to head wounds inflicted by the hired thugs. A villager had his leg broken by the riot police.

Amnesty International published a report
denouncing the brutality of the March 15th attack and the lack of a
just negotiation and compensation process on behalf of the government.

Having struggled against the loss of their homes and livelihoods for over three years now, and anticipating attacks for the past four months, many of the villagers and supporters are physically and psychologically drained. The main source of inspiration and hope comes from the continued farming of the land, a collective cultivation that commenced on March 17th. Despite their courage, the prospects for the community's survival were greatly dimmed.
Only international pressure can prevent the devastation that
accompanies the U.S. military's expansion in Korea.