Solidarity Protest for the Hunger Strikers at Colnbrook Detention Centre

A report and three pics of the protest that took place in London in solidarity with the hunger strikers at Colnbrook Detention Centre. 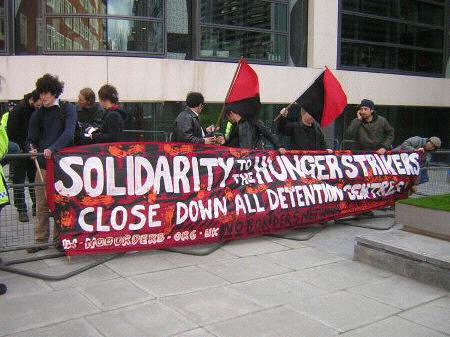 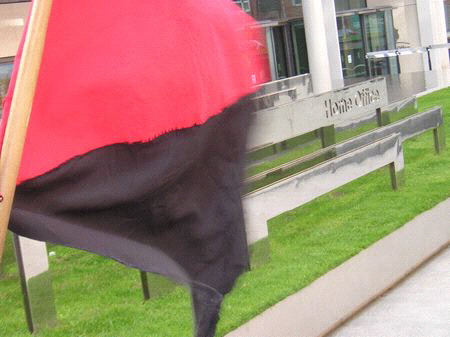 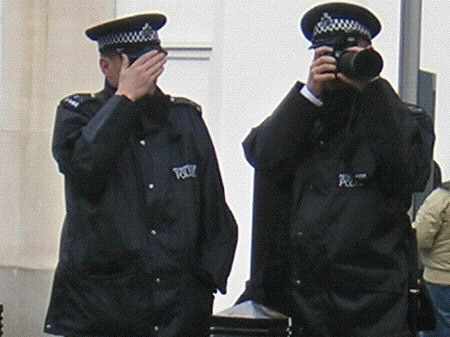 They love taking pics, but don't like much having theirs taken, do they?

On Thursday 13th April, around 20 people demonstrated outside the Home Office building in central London, in solidarity with over 100 asylum seekers and refugees currently in hunger strike in Colnbrook detention centre near Heathrow airport. For more information see:

The urgent demonstration was called at very short notice by London No Borders group and The Square Occupied Social Centre. It had been authorized under sec 132 of SOCPA with many restrictions. This legislation effectively creates a no-protest area of 1 mile around Parliament. As a result of having requested authorization for the demonstration, the authorities put a cap of a maximum of 25 protesters that would be allowed to join in at any one time. This is, yet again, a flagrant violation of the right to protest freely that is increasingly been imposed everywhere in New-Britain's 'Blair Bitch Project'.

As it happens, for once, it was actually ok to have only 20 people turning up, because under the restrictions being imposed on the demo, if there had been another 10 or 20 people turning up for example, some would have not been able to join in unless others left. Or perhaps it would have been the case of having to do turns to demonstrate! Such a situation could be hilarious if it was part of a Monty Python sketch or something similar, but as it was for real, it is less amusing and much more worrying to see how the state is using unprecedented repressive laws to oppress any form of dissent and solidarity in our streets.

Not only people were forced once again into a pen separating the 'authorized protest area' for what is increasingly turning out to be neo-fascist Britain, but a police intelligence team spent over an hour taking photos of all those present. Err ... one hour to take the pics of 20 people?! I mean, really, over an hour?! ... Hmm .. this can only be due to two things; they either wanted 5 or 6 pics of each of those present, like one standing on the right hand side of the pen, another on the left hand side, now in the centre, now towards the back. Now the protester is picking his nose, now she is lighting up a cigarette. Oh, no! now two protesters are talking!! ... they must be plotting a popular uprising ... quick, take more pics of them!

Otherwise the only second reason I can think of why it took them so long to take everyone's photos, could be more to do with stuff like that they were still working out how the camera worked (?) Maybe, although this would actually be quite funny for an "intelligence' gathering team, wouldn't it?. In any case, it is absolutely bonkers and over the top the way in which the policing of social movements and grass roots activities is currently being done in Britain, all under the excuses of terrorism and intelligence.

Anyway, the struggle inside Harmondsworth and Colnbrook detention centres continues. There are at present around 120 detainees in hunger strike. It is not clear how the situation will develop. But Patrick, a detainee currently in hunger strike states:

“The hunger strike in Colnbrook will go ahead until we're dead, because to deport us to our countries is like killing us. So we've decided to die with hunger”

The only thing clear though is that solidarity with those deemed invisible because of being 'illegal' is now more needed than ever.

For background information about the start of the strike and the reasons behind it see:

thank you for your info

Thanks to all those who make it possible for the public to know what is actually happening to people who come to our wealthy country seeking asylum. I am ashamed that the uk cares so little about human suffering. All power to the protestors! and may we live to see better times...