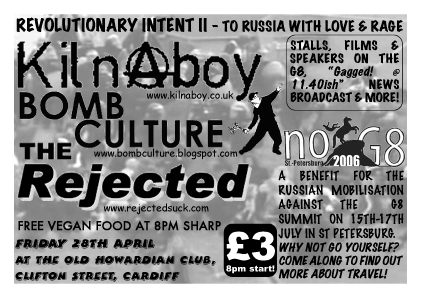 A Benefit for the russian mobilisation against the G8 Summit on 15th-17th July in St Petersburg.

WHY NOT GO YOURSELF?
COME ALONG TO FIND OUT MORE ABOUT TRAVEL!

Why not spend your summer holidays in Russia?
Russia is the new president of the G8. This years G8 summit will be in St. Petersburg on 15th to 17th July. Russian activists have called for protests all around the world during G8 summit & an international protest in St. Petersburg - attention of the whole world will be directed on the G8, & we must show they will be met with protest everywhere they go! Activists from South Wales are gonna be there, if you wanna be one of them contact