A solidarity demonstration took place in Queen St, the main shopping street in Cardiff, on Thursday in support of the people on hunger strike in Colnbrook and Haslar Immigration Removal Centres.

About 30 people and a banner gathered to hand out flyers and talk to people about the situation of the hunger strikers and immigration detention and borders in general.
A demonstration took place in Queen St, the main shopping street in Cardiff, on Thursday in support of the people on hunger strike in Colnbrook and Haslar Immigration Removal Centres.

About 30 people and a banner gathered to hand out flyers and talk to people about the situation of the hunger strikers and immigration detention and borders in general. The 'No Borders No Nations No Deportations' banner generated some interest and curiosity from members of the public, both supportive and otherwise.

The action was called by no borders south wales.

Below is the text of the flyer that was given out, and on the reverse were contacts for MPs and the detention centres, to encourage people to voice their support/concern.

On Saturday 8th April, over 300 people protested outside Harmondsworth and Colnbrook Immigration Removal Centres, nr Heathrow airport. This protest was against the brutal and unjust treatment of detainees by the Home Office and Serco and UKDS, the private companies that run these centres.

Inside of the prisons, inmates were beaten by guards when they tried to see the protesters outside and were forbidden to go into the exercise yard in case they would make contact with the protestors.

In protest at their inhumane treatment by security guards, 150 inmates in Colnbrook refused food & water on that day.

On April 16th over 120 inmates at Haslar detention centre, Portsmouth began a hunger strike joining the 100 at Colnbrook who remain on indefinite hunger strike.

"The hunger strike in Colnbrook will go ahead until we're dead, because to deport us to our countries is like killing us. So we've decided to die with hunger"

Colnbrook is one of 10 so-called Immigration Reception and Removal Centres across the UK.

Of the UK’s 10 detention centres, 7 are run by private companies. They hold failed asylum seekers and "illegal" immigrants due for deportation, as well as new asylum seekers whom the authorities believe may disappear from the system.

Up to 2,600 people can be held in these centres – men, women and children.

CALL FOR ALL REMOVAL PRISONS TO BE SHUT DOWN
Immigration and border regimes are tools of racist oppression
If Capital travels freely so should people
Migration management is a booming industry
Surveillance technologies monitor all of our movements – corporate and state control is our collective responsibility to resist and reject
If you are interested in supporting detainees by phone, letter or visit, contact: 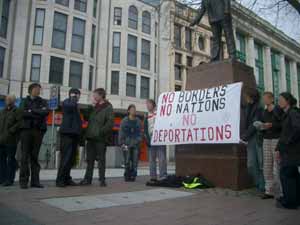 One of a couple of piccies I got of some of the participants in the demonstration.

(Faces blurred cos I'm not sure everyone will want their mug online!)