Roger Toussaint, president of the Transport Workers Union, Local 100, heads to jail today to serve a 10-day sentence for authorizing a strike in December

Send Roger a card while he's in jail. Go on - show some solidarity. 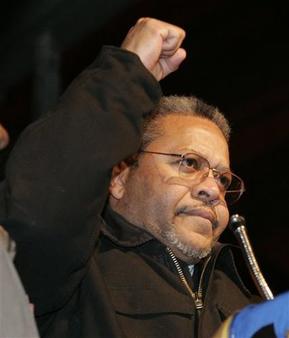 Send Roger a card while he's in jail. Go on - show some solidarity.

Roger is be a guest of

Roger Toussaint, president of the Transport Workers Union, Local 100, heads to jail today to serve a 10-day sentence for authorizing a strike in December that shut down New York City's Transit system for a little more than two days. Hours before heading jail, Toussaint joins us in our firehouse studio to discuss the strike, the future of the union and what he calls the "extortionist media."
[Democracy Now! report]

"That would be my biggest concern — that my loved ones would worry about me more than they should, more than they need to," Toussaint told the New York Daily News

The youngest of his five children, 10-year-old Tano, told his father last night "I understand".

"He asked me whether I'll be okay. I gave him assurances that I'll be fine, that his father will not be at risk. But he is a 10-year-old boy," said Toussaint, 49. "He's very aware of what's going on."

"This is an attempt to subject the union to a public flogging in order to intimidate everyone from standing up," Toussaint said. "It's going to backfire. People see that we have a right to fight to defend pensions and health benefits that go along with hard work."

Even though he said his wife supports what he's doing — "she's more concerned about outside attempts to tear me down, rather than the risks of jail" — he acknowledged that his looming imprisonment will cause some pain.

"The contact with my family," Toussaint said, "that's the main thing I'll be deprived of."

Detail, should you need it:

Mr Toussaint is enjoying the hospitality of