New ID card proposal to flush out those using anonymity

That' s a very big, very serious dimension to the whole database and ID card issue here in Australia. With a government of such dubious credentials on their commitment to human rights playing footsies with rendition to torture countries, blanket opposition to a bill of rights, denial of the refugee convention word and spirit, denial of fundamental but inconvenient property rights like native title, and likely lots more, why trust this government on the ID lite card proposal? 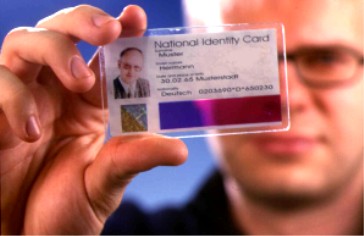 Government of such dubious credentials

AUSTRALIA: In a country without a decent bill of rights regime to protect fundamental human rights, and deep concerns of lack of trustworthiness in this federal govt, one wonders how this so called ID lite card proposal, which sounds a bit like an opt in but suffer if you don't, situation, will hurt people with a real valid reason to stay out of the spotlight?

As a a lawyer it worries me that naive media might uncritically boost a govt proposal with huge implications for individual freedom, or at the least not fully analyse the situation.

What about those involved in Royal Commissions as witnesses with very real, very lethal enemies. What about whistleblowers seeking a quiet life again. What about those on witness protection programme? What about refugees who know that spies and assassins will visit Australia with the precise intention of killing them off and on the plane again, as advised by the former director of ASIO on Channel 9 Sunday programme recently.

That' s a very big, very serious dimension to the whole database and ID card issue here in Australia. With a government of such dubious credentials on their commitment to human rights playing footsies with rendition to torture countries, blanket opposition to a bill of rights, denial of the refugee convention word and spirit, denial of fundamental but inconvenient property rights like native title, and likely lots more, why trust this government on the ID lite card proposal?

Why trust them indeed.

I'm aware of a journalist in Qld who survived a shooting exit wound front to back during the Fitgerald Inquiry days. I am aware of another who got his back broken by senior police. I'm aware of another who reports a contract was taken out on his life by a senior political party figure in Qld (who wasn't named by the way) in the 80's. These are people who won't take out a mobile phone account in their own name let alone want an ID card on them.

What are the numbers of these people and will we have these virtually wiped out for the sake of a Mussolini style higher efficiency in public administration? Indeed would the highly efficient public administration be a highly corrupt efficiency for the taking out of these do gooders hiding in the refuge of anonymity but then flushed out by this card to obtain doctors advice, or medication?

Sure this is the hopefully narrow, extreme scenario, but we have come from a recent history of a good decade of cancerously rotten Qld police force of the mid 80-90ies, a NSW police force not much better in mid 70-early 90ies.

We know there are corrupt politicians exposed every so often like Rex Jackson taking bribes in NSW, and Qld rorting of the electoral rules.

We all know what happened to Carolyn Byrne with one theory in this town she knew something she shouldn't, but all before the courts after the arrest of the talented boyfriend Mr Wood 10 years later.

So when you hear about state police forces integrating their databases to track say sex offenders, better control organised crime, keep in mind these tools are as good or dangerous to civil society according to the integrity of the people using them.

Corrupt authority figures will use such databases to take out their rivals who have fled to another jurisdiction within Australia for their very life.