Immigration and May Day, from Chicago

Chicago is the birth place of 'May Day', but today's march demonstrated a disconnect between the current low paid workers demanding recognition within the system, and what we have grown globally to understand May Day as celebrating. 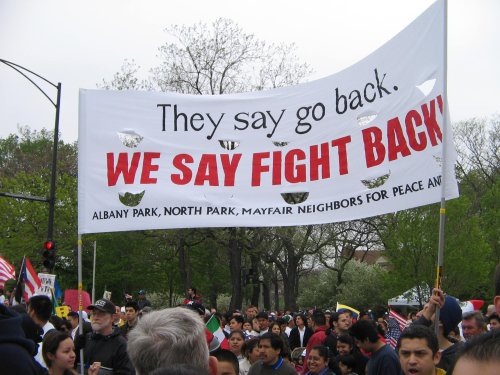 We Say Fight Back 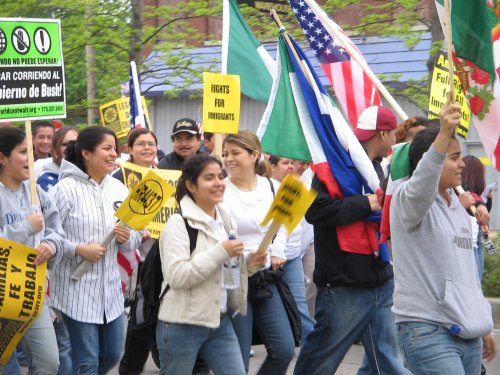 Many school children walked out as well as workers 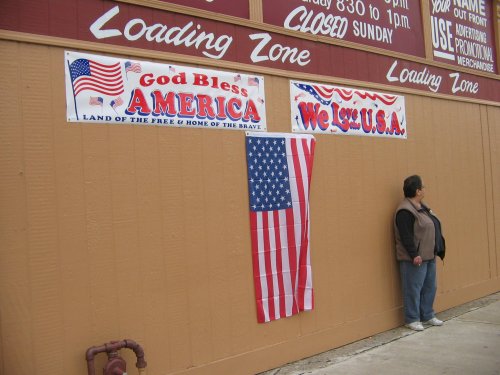 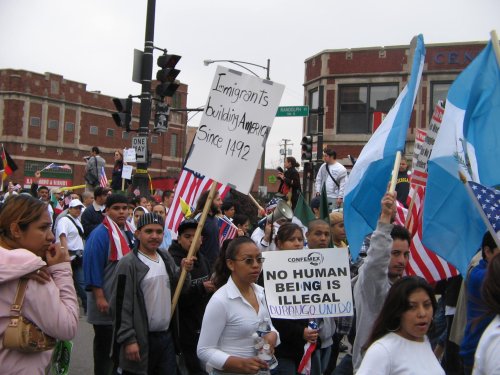 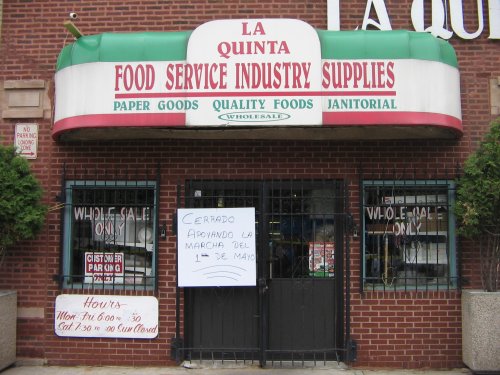 Many shops have closed for the day, although its not an official holiday 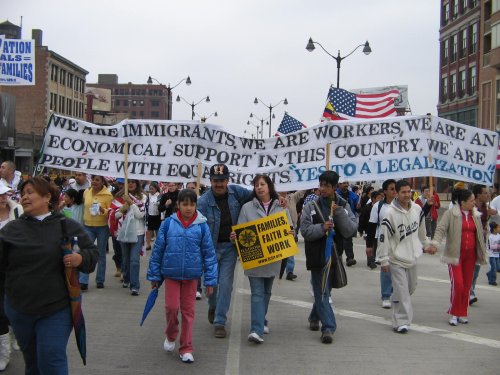 The focus has been on assimilation 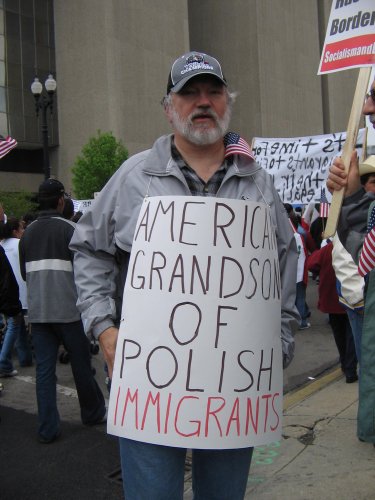 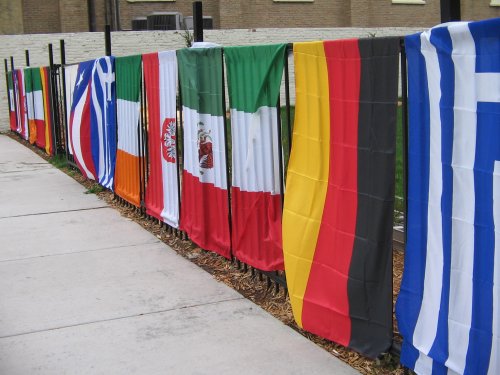 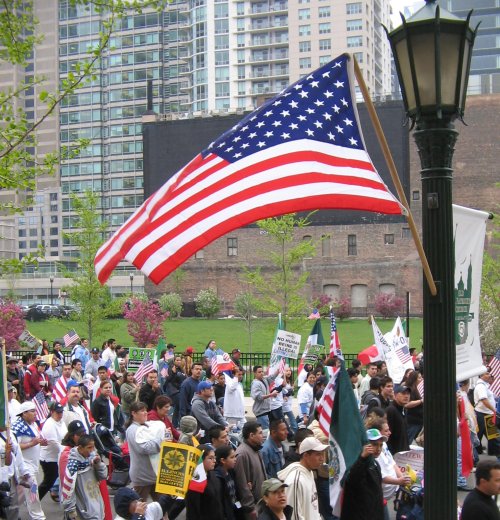 The Stars and Stripes 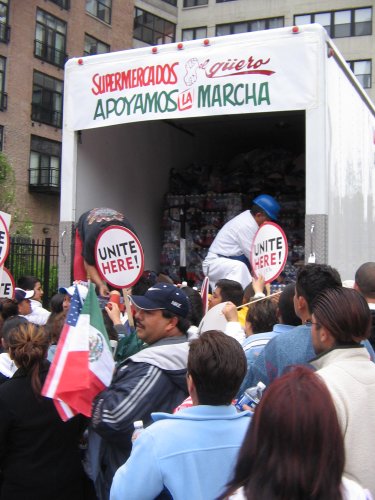 Free bottles of water were handed out to marchers 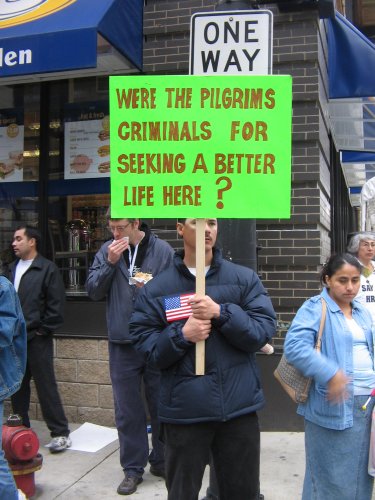 One of many placards commenting on hypocrasy 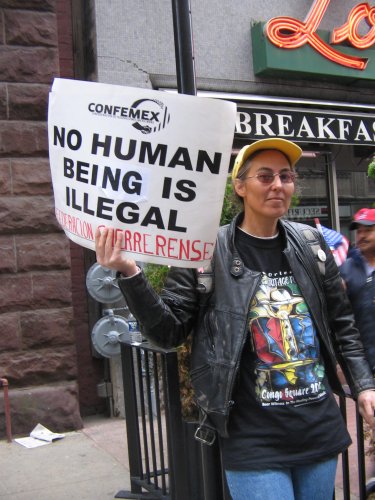 No human being is illegal 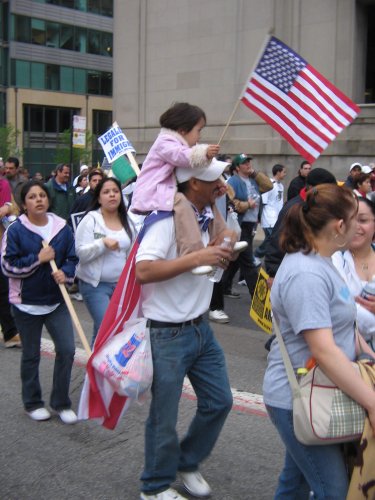 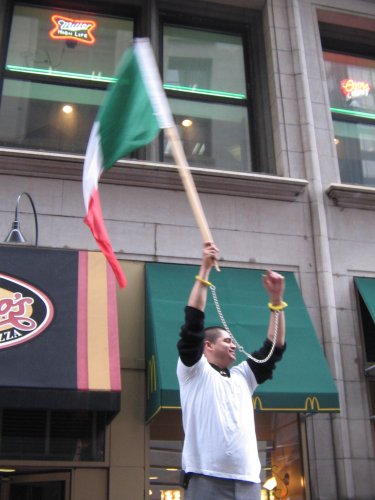 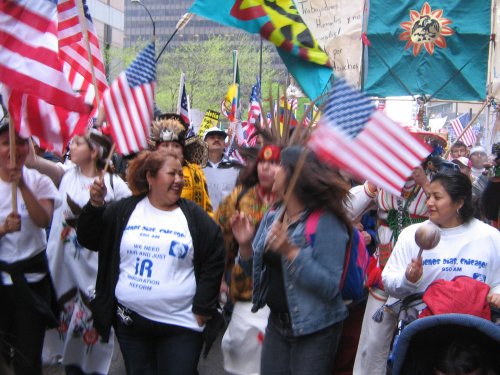 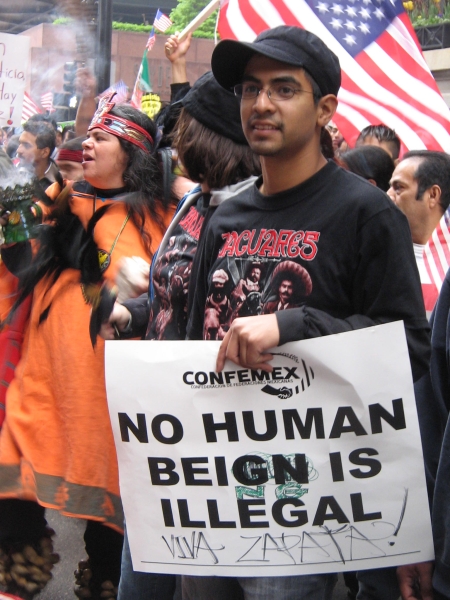 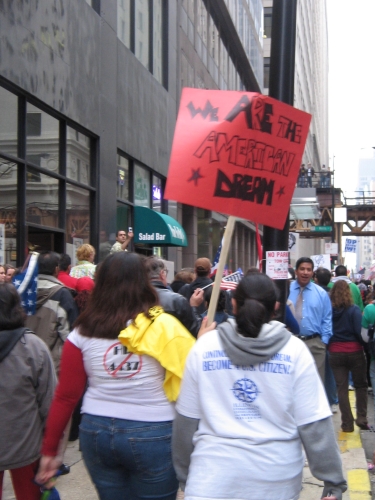 We are the American Dream 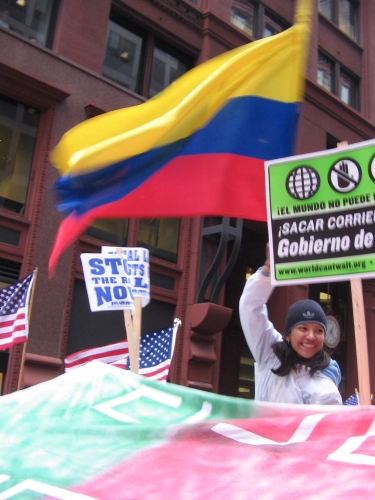 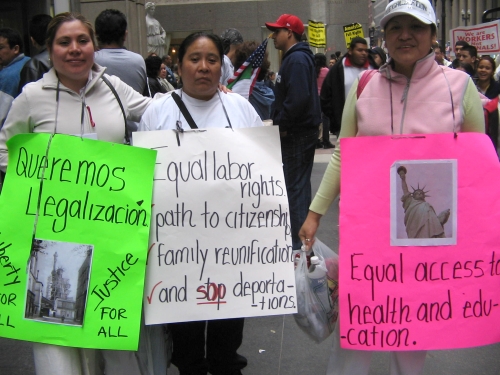 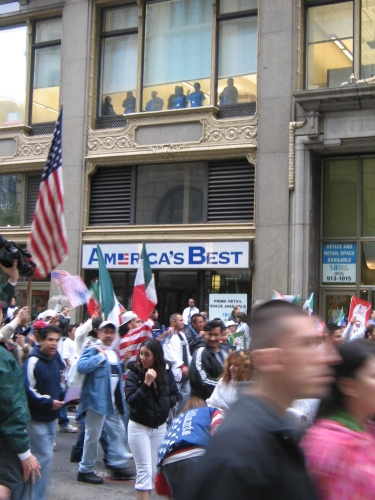 Chicago - home of the original May Day. Although the 1st of May is not a holiday in the US, thousands of workers and school students walked out today to take part in a huge pro-immigration march across the city. 120 years ago immigrant workers speaking a mixture of European languages struck to demand the 8 hour day. Today workers from a different continent are coming together to demand that they be treated as equal citizens to the descendants of those who won that right.

The events in Chicago and across the US are in response to the proposed H.R. 4437 legislation - also known as “The Border Protection, Antiterrorism, and Illegal Immigration Control Act of 2005” - which would, among other things, make illegal immigration a felony punishable by much higher fines, and build a 700 mile long fence along the US-Mexico border. The issue of immigration in the US is reaching a climax with the propose legislation and its huge nation wide response. However, like many problems in the US, it cannot be seen out of the context of race. Chicago is one of the most diverse and segregated cities in North America and besides its Hispanic, Black and Irish communities has the largest population of Swedes, Assyrians, Serbs, Lithuanians and Poles outside of their 'home' countries, and the third largest Greek population outside of Greece. Those working with illegal immigrants claim that there are, for instance, far more Polish illegal immigrants in Chicago than Hispanics, suggesting that the intense focus in the US on Latin American rather than European 'illegals' is motivated more by pure racism than many would care to admit.

The march this afternoon perhaps reflected this focus on the issue as only one for Latin American's. The vast majority of those marching were Hispanic, and although these marches have been some of the biggest the US has seen since the Vietnam war, the movement was almost entirely focused on this one issue. A small black bloc were allegedly in existence from the information circulating email lists beforehand, and a few of the usual newspaper selling Trots were scattered about, but this movement seems to have taken the radical community just a little bit by surprise. News of the first big marches on the 10th of March came after the event, and the involvement of the non-Hispanic radicals in the organisation of today's actions have been fairly minimal.

No samba bands. No puppets. No sound systems. No riot police. The event attracted people of all ages, but only one background. This was not even like the 2003 anti-war marches, that brought out people who otherwise would never march. Thousands came out who probably have never marched before, but they were not joined by the usual suspects we expect to see on May Day.

120 years later a mass movement is taking up the original call of May Day, but it feels like there is a disconnect to the celebrations and actions taking part in the rest of the world. Rather than wanting to fight the system, this immigrant movement is calling for inclusion in it. The mostly handmade signs being carried through the streets of Chicago were calling for recognition of the work of immigrants, that this is a country of foreigners, that we are all Americans, that we pay taxes and contribute too. The slogans being shouted were as often “U! S! A!” as “Si, Se Puede!”, and the flags were national - the Mexican and the Stars and Stripes - rather than black or red. I expected before I arrived to hear people calling out “No Borders”, but that wasn't the aim.

Another generation of immigrants wants to be let in, and the current “Americans” don't want to make room. But this is an old fight and one that will always resurge while the issue remains inclusion within borders, rather than a dismantling of them.