latest news on mapuche prisoners. NO WATER. call out to action tomorrow. 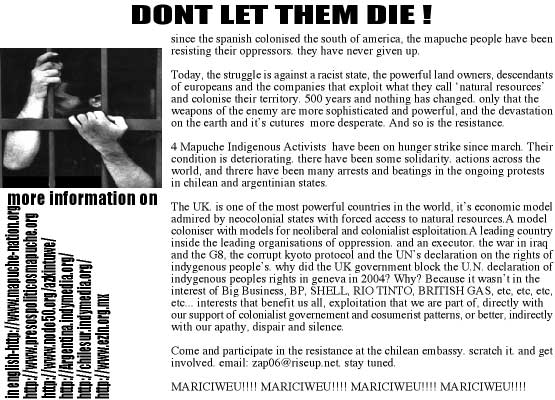 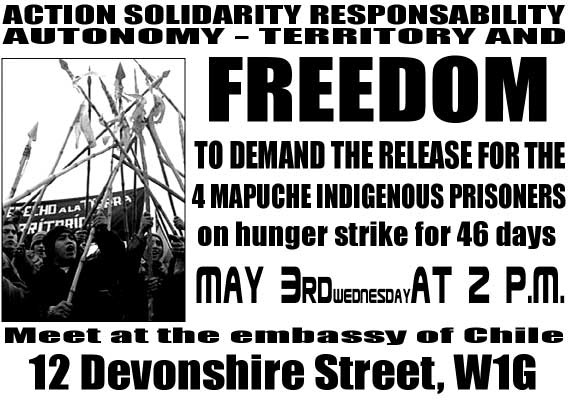 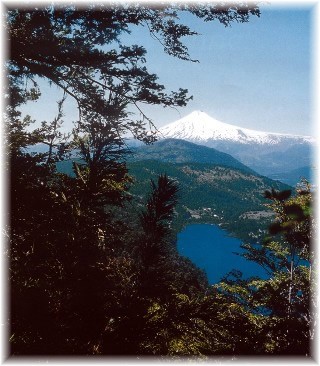 Despite their terrible condition after 50 days on hunger strike, the 4 prisoners Patricia Troncoso, Juan Marileo, Juan Carlos Huenulao y Florencio Marileo took the extreme decision of going on DRY HUNGER STRIKE, refusing food and water, after being tricked into moving from the prison in Anglo to the one in Temuco. According to her father, he saw Patricia sleep in shackles-leg irons.
the mapuches people that have travelled long distances, from the mountains in chile and the plains in argentina, in precarious conditions but without complain, to act and be near their brothers and sisters nearing death in prison. have put together several 'comuniques' around the current most serious situation. our brothers and sisters in prison, have NOW STOPPED DRINKING WATER.

some of these letters, words that have been said a thousand times before since the terrible time when the wincas and their war machine and their thirst to exploit earth arrived to indoamerica, these letters, begin with the words. ' to the guardians of the earth' and often end with ancient cry MARICI WEU! ( we will win a thousand times ).
sadly, it seems a bit ridiculous to use these words here, having had heard similar words in 'hippie like' circles by well meaning people, young and old, however anouncing parties, gatherings and the such and them seeing the streets empty of intelligent and effective protests when at the same time realising that the groups solidly resisting the destruction of this earth, in the 'heart of the beast ' are very few, and getting smaller, fewer, more desolutioned, deluded, or bickering. and so we hesitate, but here it goes, in case, even only one of you, recognises her/him self in these words, and wants to commit to fulfill their meaning without expecting anything for it, and fully understanding their unmarketed meaning.

the mapuche people like most indigenous people have the misfortune, and the reponsability of sitting in the way of what the exploiters and murderers, the politicians, economists and statisticians of the right and the left of the economists and even well meaning but ignorant people call 'natural resources'. stuff that makes up earth and that is not for us to exploit and to destroy, as with that we destroy ourselves. they are doing the dirty work for us. they are defending what makes up earth that we live in,and of which we depend, and who depends partly on us. and they are being killed. it is 'our' nation-states, our livestyles, our pension funds and banks, but most of all our innaction, apathy and self imposed powerlessness that is getting us to these sad end. on the other hand, there is the warriors, the real warriors, and not the glitter, paper ones on TV, that are defending this and who at least if we our sisters, our rivers, our sea and sky our forests our animals and our true cultures all have to die, lets us die in dignity,

to the WARRIORS OF THE EARTH. TO THE REBELS OUT THERE AND TO THOSE THAT WILL NOT LOOK THE OTHER WAY...

to the guardians of the earth.

or quick good background on the mapuche people and struggle, in english read:

for information in english, for a traditional international/european audience, (no the cup of mate of many people, from the political side of things)

their pages on benetton are very elaborate and an example of how earth and people are treated by this industry, but only one example that has some support internationally, esp italy. the same story applies to the paper industry and the furniture industry, the dams industry and tourism industries

general information on the mauche people. the term 'nation', shoul dnot be interpreted in the european sense and its parallelts with 'state'

could also post greenwash from the chilean governement side of things, nicely written in english and good candidate links to find the right forums, but well pass on that

it is easy to undersand automatic translations generated by