In a year when the only anarchist event on mayday became part of the trade union march,
we decided, if you can't beat them, join them. 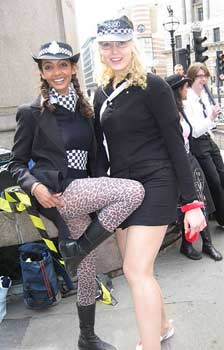 Mayday is traditionally a day for ridiculing authority, ignoring the rules that have been set up for us and creating new realities. Since the Haymarket Martyrs it has also been an important day for remembrance of workers struggles. In recent years in London it has been an important day for the celebration of anarchist and anti-capitalist groups, who have organised separate events from the regular trade union marches. However these events and the organisers have been dogged by over zealous police attempting to suppress any deviance from strict police monitored A to B marches.

This year, a variety of anarchist groups in London announced that there would be an autonomous bloc on the Trade Union march as part of the euro-mayday celebrations. To be honest, we thought it was a shame a number of factors, including police pressure had lead to a London Mayday without an event more creative than a march. It was also the first Mayday in years to fall on an actual Monday Bank Holiday.

Meeting up in our secret side room, of a central London pub, the Hijackers bashed our brains together to come up with something for this year. Eventually the Mayday Police Victory Party was born.

We realised that without a major anarchist action, there would be a lot of Police missing out on their guaranteed double time, mayday bonus. Plus their bosses would be looking forward to toasting the hard work they had put into suppressing previous maydays, in order to get people to toe the line and protest in an organised and authorised manner. What better way to celebrate this than to invite the police to a big, anarchist street party? And what better location than the Bank of England, on a bank holiday?

Our actions generally attempt to blur the line between general public and hijackers, involving everyone in the event rather than performing for them. The police however always get stuck on the outside, looking in longingly and wishing they could play. We have never been ones for painting things as totally black and white, and we know that underneath those stern uniforms there are a bunch of saucy party goers aching to get out.

A Police party was perfect, as at least when the vans of coppers turned up they would look the part and could join in much more easily.

Even marchers are not safe from Police attack.

The Anarchists on the authorised March were attacked by police as they entered Trafalagar Square, so the oppression of Mayday celebrations is much worse than you suggest.

By the way, who was that mysterious Security Guard who kept on photographing you at the Bank, in the Park and at Trafalagar Square? Was he from one of the City companies?

don't get too paranoid alf!

the 'security guard' was a photographer well-known to the hijackers who just got into his 'security' role wholeheartedly. he has a public website - www.immoklink.com