Following on from Indymedia's coverage of MayDay 2006, - see 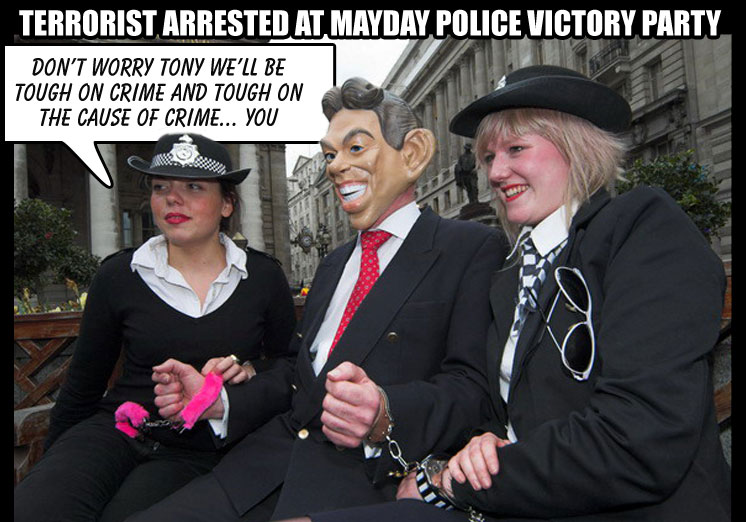 Fed up with the fact that the annual Mayday confrontation has become a boring ritual? Haven’t smashed up a Mcdonalds for what feels like eternity? Annoyed that the pigs have got it all sewn up?

The Space Hijackers (www.spacehijackers.org) a group of situationist degenerates have an answer (of sorts) - if you can’t beat ‘em (or if in fact they’re beating you) join ‘em.

“Meeting up in our secret side room, of a central London pub, the Hijackers bashed our brains together to come up with something for this year. Eventually the Mayday Police Victory Party was born. We realised that without a major anarchist action, there would be a lot of Police missing out on their guaranteed double time, mayday bonus. Plus their bosses would be looking forward to toasting the hard work they had put into suppressing previous maydays, in order to get people to toe the line and protest in an organised and authorised manner. What better way to celebrate this than to invite the police to a big, anarchist street party? And what better location than the Bank of England, on a bank holiday? We decided to host a Police party, for the police, dressed as the police. Our actions generally attempt to blur the line between general public and hijackers, involving everyone in the event rather than performing for them. The police however always get stuck on the outside, looking in longingly and wishing they could play. We have never been ones for painting things as totally black and white, and we know that underneath those stern uniforms there are a bunch of saucy party goers aching to get out.”

Read the rest of SchNEWS Issue 542 at www.schnews.org.uk