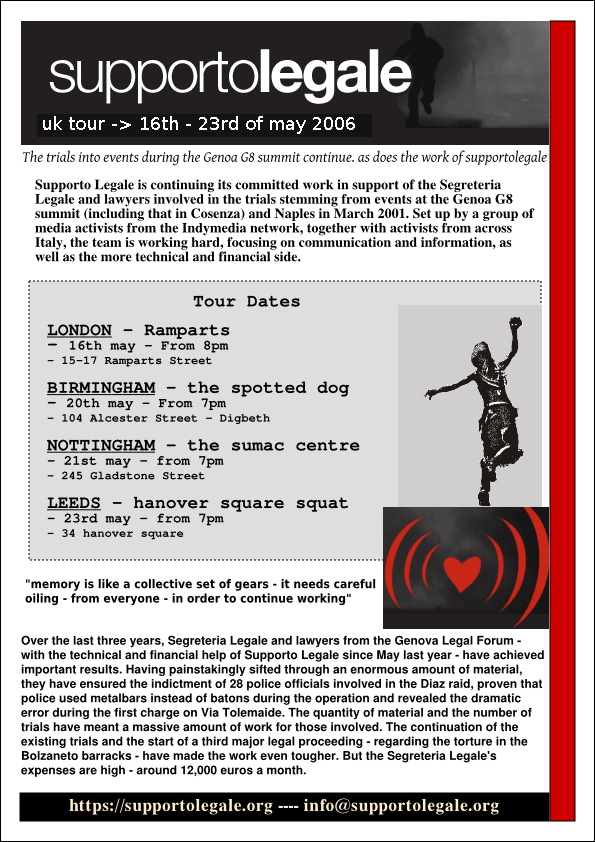 Support and assistance for the Genoa Segreteria Legale, the Cosenza trial and events in Naples in 2001 is still going on.

Supporto Legale is continuing its committed work in support of the Segreteria Legale and lawyers involved in the trials stemming from events at the Genoa G8 summit (including that in Cosenza) and Naples in March 2001. Set up by a group of media activists from the Indymedia network, together with activists from across Italy, the team is working hard, focusing on communication and information, as well as the more technical and financial side.

Over the last three years, Segreteria Legale and lawyers from the Genova Legal Forum - with the technical and financial help of Supporto Legale since May -have achieved important results. Having painstakingly sifted through an enormous amount of material, they have ensured the indictment of 28 police officials involved in the Diaz raid, proven that police used crossbars instead of batons during the operation and revealed the dramatic error during the first charge on Via Tolemaide. The quantity of material and the number of trials have meant a massive amount of work for those involved. The continuation of the existing trials and the start of a third major legal proceeding - regarding the torture in the Bolzaneto barracks - have made the work even tougher. But the Segreteria Legale's expenses are high - around 12,000 euros a month.

The Truth and Justice Committee, set up with the task of collecting money for the trials, is no longer able to raise sufficient funds. Supporto Legale has launched a series of fund-raising campaigns, pouring everything collected for the GLF into the Segreteria Legale's work and the trial costs.

But not even this is enough. The efforts, the large and small donations from activists following the trials across Italy are not enough. It's vital that everyone who was at Genoa or who built their political careers around Genoa starts worrying about the trials it is leaving in its wake. All those individuals, associations, parties, artists, organizations and political groups that participated in that movement of people and ideas should remember the following: if we don't raise enough money NOW, the Segreteria Legale will have to close. If that happens, all the defence and legal work carried out so far will end from one day to the next. This means that 26 people will probably be sentenced to years and years in jail on charges of destruction and looting. It means that those who were beaten and tortured at Diaz and Bolzaneto will no longer see justice done or receive compensation. It means that the history written by the courts - which have already ruled that Carlo Giuliani was killed justly - will say that the demonstrators at Genoa were TREATED FAIRLY; they will say that nothing bad, nothing abnormal happened at Diaz and Bolzaneto. Furthermore, they will say that other charges can be brought, that others can be disproportionately tried and convicted merely to set an example.

We want to see an end to the trials, conducted by the same prosecutors, Canepa and Canciani, against the anti-fascist militants of O.R.So, against Marta, Milo, Orlando and Fede. The energy that has driven the Supporto Legale network of solidarity has principally focused on the Genoa trials. But is also needed elsewhere, for the trials under way in Naples against police violence in the Raniero barracks and in Cosenza, where 13 militants are accused of "subversive conspiracy". We support, collaborate, produce information and offer technical and legal support to everyone involved in the political trials against the ENTIRE movement. Supporto Legale does not discriminate. Because we don't distinguish between the "goodies" and the "baddies"

In Genoa, there were 30,000 of us subversives.
We're still subversive. Many others still are.

But too many sections of the movement have forgotten or are trying to forget Genoa. We beg them to please remember. Supporting the trials means claiming our own history, to ensure that others don't write it for us. It means making sure that future developments aren't grounded in an acceptance of what happened during the Diaz raid, of the carcinogenic gas used on protestors, of the indiscriminate police brutality, or of the torture in Bolzaneto.

Memory is like a collective set of gears - it needs careful oiling – from everyone - in order to continue working properly.