“I saw blood gushing out of his head, and helped bandage it. As we were getting him into the ambulance an Israeli soldier grabbed his long hair and they all tried to stop him from leaving in the ambulance even though they knew he was injured”, said American eyewitness Zadie Susser who saw Phillip Reiss from Austraila sitting in shock immediately after he was hit. 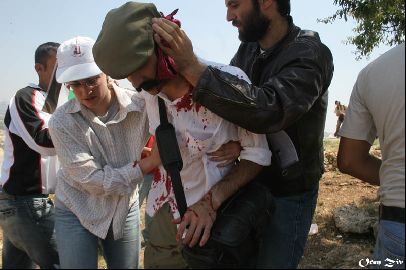 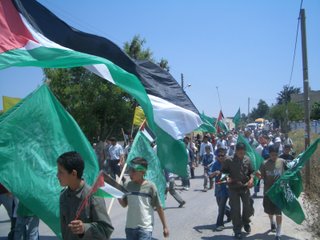 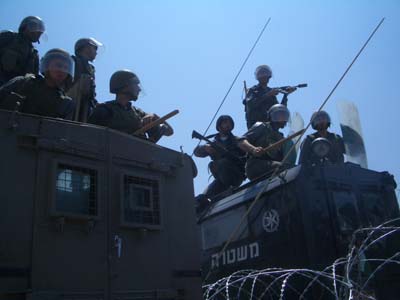 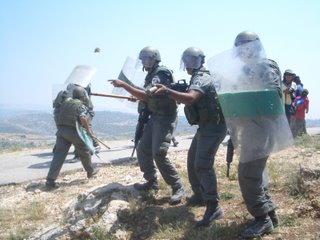 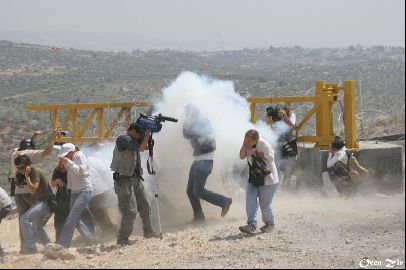 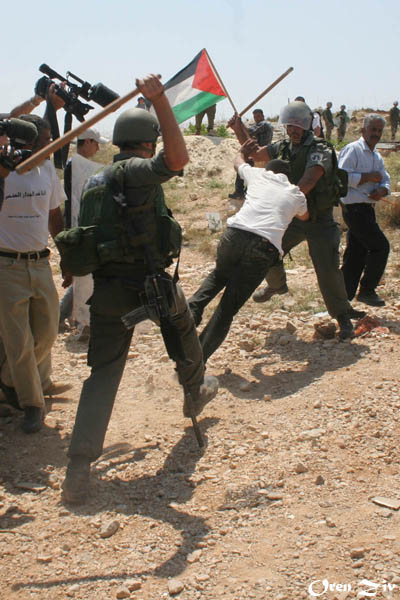 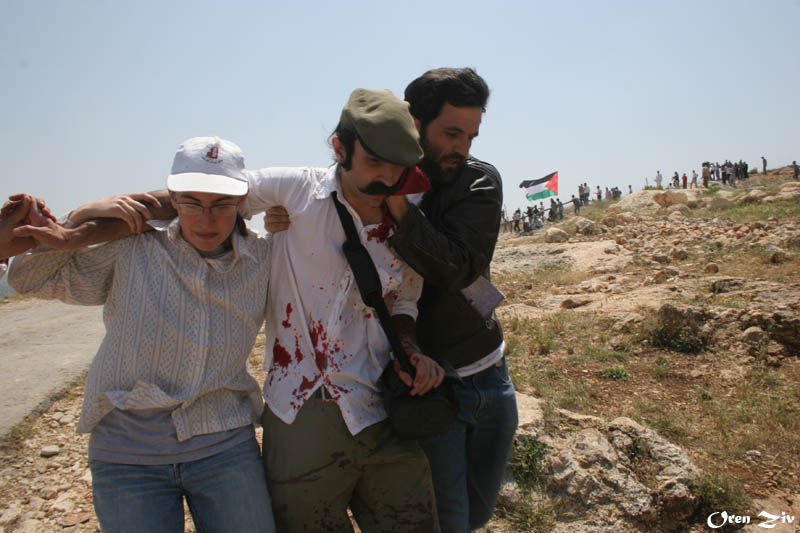 AFP Cameraman Jamal Al Aruri was shot in the hand with a rubber bullet while he was filming two of his fingers were broken. Adeba Yasin (65) was hit by a rubber coated bullet under her eye while she was sitting on the balcony of her home.

Phillip Reiss (25) from Sydney, Australia was shot as he was running away – he had been filming the demonstration. BJ Lund (21) from Ry, Denmark was also shot as he was standing near army jeeps. Both Phil and BJ are currently in Tel Hashomer hospital in Tel-Aviv. The bullet caused a hemorrhage to Phil’s brain, though he is now conscious. BJ required stitches to the head.

Abdullah Abu-Rahme (35 and the Co-ordinatior of the Bil’in Popular Committee Against the Wall), Muhammad Al Katib (32, also from the Popular Committee) and Akram Al Katib (34) were beaten.
The demonstration of about 300 people had marched, singing, chanting and waving flags to the gate in the apartheid barrier.
This week, the gate had been locked open, so the Israeli soldiers relied on their jeeps and barbed wire to stop the people of Bil’in from walking into their land. After a while, some of the demonstrators started to open the barbed wire. The Israeli soldiers started hitting people with clubs. A few rocks were thrown from a small group of youth who were away from the main demonstration in front of the jeeps. The soldiers then started firing on the peaceful demonstrators at near point-blank range as they were running away – they were a maximum distance of 10 meters away when shot.

According to Israeli Human Rights group B’Tselem, Israeli Military Regulations stipulate that “the minimum range for firing rubber-coated steel bullets is forty meters. The Regulations emphasize that the bullets must be fired only at the individual’s legs, and are not to be fired at children” Israeli soldiers fire rubber-coated steel bullets at Palestinian children during the Bil’in demonstration every week. Israeli demonstrator Matan Cohen was recently shot in the eye during a demonstration in Beit Sira. He now has only partial sight in that eye.
The Israeli military usually uses rubber bullets during demonstrations when Israeli and international activists are present. When Palestinians demonstrate on their own the military uses live ammunition or rubber coated steel bullets.

Two of the demonstrators that were shot from close range were filming the demonstartion. British attorney general, Lord Goldsmith confirmed on the 6th of May he was considering whether to seek the extradition and prosecution of an Israeli soldier who shot dead British cameraman James Miller in Gaza, after a jury in a British inquest unanimously agreed that “Mr Miller was indeed murdered”

Eleven Palestinians have been killed by Israeli soldiers during non-violent demonstrations against the apartheid wall.
On Sunday, May 14, the Israeli Supreme Court will hear Bil’in’s legal challenge over the theft of their land by the illegal wall.
Bili’in villagers have been protesting the wall nonviolently for the last 15 months and have become a symbol of Palestinian-Israeli-International cooperation.
The route of the wall in Bil’in is designed to annex the settlement of Modi’n Elite and it’s outpost, Matityahu Mizrah, to Israel along with the land belonging to Bil’in so that these illegal settlements can continue to grow.

In a separate court case brought by the village and Peace Now against the new settlement of Matityahu Mizrah, the High Court was told of a land-laundering scheme that allowed the real-estate dealers and settler organizations to convert private land - “purchased” sometimes through dubious means - into “state land..” Then, before the construction of the separation barrier, the land was “returned” to the buyers so that they could establish facts on the ground and press the Defense Ministry into moving the route of the fence to the east of the new illegal neighborhood.

After being prodded by the Supreme Court, the Israel Police’s National Fraud Squad opened a criminal investigation into the illegal construction of hundreds of housing units in the Matityahu East “neighborhood” of the Modi’in Ilit settlement.

According to Israeli newspaper Haaretz, hundreds of millions of dollars are believed to have changed hands in the affair.

To view the video footage that Phil, who was hit in the head with a rubber bullet, was filming when he was shot follow one of these links:
Streaming:

In the clip you can see how close the demonstartors were to the soldiers when the soilders opened fire - the sound of the shots fired is clearly audible.